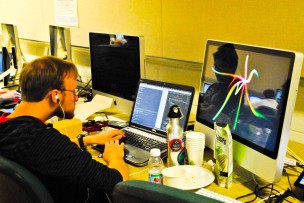 This weekend, computer science buffs participating in WesHack2.0 found the solution to a boring Friday night: they created the mobile application WesPartyMap, which helps students locate parties on campus. The winning team, consisting of Sam Giagtzoglu ’16, Max Dietz ’16, and Jack Lashner ’16, created the mobile application as part of the University’s first hackathon of the 2013-14 school year. They were one of three teams that had 48 hours to create a Wesleyan-themed computer application.

The second runners-up were Aaron Plave ’15, Brian Gapinski ’14, and Justin Raymond ’14 with WesHappening, an interactive map that tracks on-campus events.

Dietz, one of the WesPartyMap creators, explained the purpose of his team’s application.

“The idea was that you’re here on the weekend, and you hear about three good parties, and it always happens that you turn up to one of them and then it sucks,” Dietz said. “So we created an iPhone and Android app that you can download, and every half hour it will track your location in the background. [The app has] a heat map of where people are along with graphs of the party over the last two hours and short descriptions.” 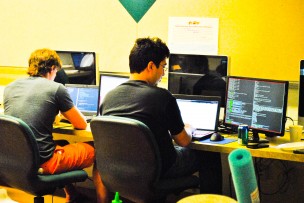 Julian Applebaum ’13, Evan Carmi ’13, Carlo Francisco ’11, and Jonathon Lyons ’12 judged the Hackathon entries on Sunday afternoon, and the winner was announced on Monday morning via the WesHack2013 Twitter account.

Kwaku Akoi ’14 organized WesHack2.0 along with Dietz and Patricelli Center for Social Entrepreneurship Director Makaela Kingsley ’98. Akoi began planning this fall’s rendition of the event following the success of this past May’s Senior Week Hackathon. Though the two events were unaffiliated, many coordinators worked on both.

“We have a few people who took part in the Senior Week Hackathon, who were seniors at the time, coming back tomorrow to judge the Hackathon and also present in the boot camp,” Akoi said before the event. “In some ways we took their idea and decided to expand it such that anybody at all could benefit from the event.”

In addition to the Hackathon, the weekend included a technology boot camp on Saturday, Sept. 7. A variety of volunteer technology professionals lead a series of keynote and breakout sessions in the Exley Science Center throughout the day. The boot camp was open to all students for a $15 fee; registration began online on Sept. 1.

Around 75 students attended the technology crash course, whose sessions covered everything from basic website development to ergonomics. At the end of the day, participants were invited to compete in an informal Defense of the Ancients (DotA) or League of Legends tournament.

“There [were] workshops on things like how Instagram works, things like how to build your own website, things on graphic design,” Akoi said. “Then there [was] a workshop on hardware and gadgets, looking at the kind of things you should ask yourself when you’re going to buy a tablet or a laptop….We [tried] to make it as broad as possible.”

Many of the sessions were led by alumni, such as Peter Frank ’12, founder of Texts.com. Frank talked about his start-up and explained why he thinks technological skills are important for all students.

“The idea of [the bootcamp] is to have more people aware of the impact of technology and aware of the speed at which you can turn an idea into a functional product which people can benefit from,” Frank said.

Texts.com was also a sponsor of the event, funding all the food for the day’s activities. Other sponsors included Instructional Media Services (IMS), Information Technology Services (ITS), the Mathematics and Computer Science departments, and the Patricelli Center for Social Entrepreneurship. Kingsley assisted with all aspects of the event, particularly focusing on the boot camp.

“[It] exceeded my expectations; the general student appetite for tech content was inspiring,” Kingsley wrote in an email to The Argus. “I hope it inspires learning outside the classroom, and opens doors for students to explore concepts like coding, web design, app development, graphic design, and more.”

The Bootcamp ended with a showcase by IMS on Saturday afternoon. All students, faculty, and alumni were invited to Exley Room 058 to see the various technology the university has on campus. The showcase included an in-depth tutorial of Google Glass. Hackathon competitors took a break from programming to show off what they had produced since Friday afternoon, though they still had several hours to complete their projects.

All University students were able to vote online for their favorite Hackathon project starting at 1:00 p.m. Sunday afternoon. However, this was not a determinant for the judges in choosing the winning team.

“We wanted programmers doing the final judging because we had prizes, and it’s a good way of giving alumni in computer science a chance to come back,” Dietz said. “But it’s also good for the teams to get a second opinion. Maybe the judges didn’t really like the execution, but the people…really liked the idea.”

“This was planned with a vision in mind to see more Hackathons at Wesleyan,” Akoi said. “Part of the boot camp’s vision is this culture of sustainability—that we do not want to make it exclusive by just having hackathons for programmers. Eventually [we hope] to be able to have some kind of New England, higher education hackathon, to get to the point where we’re sending a team from Wesleyan to compete against the likes of Yale, Harvard, and MIT.”