Add a Balsamic Glaze Tart to Your Menu 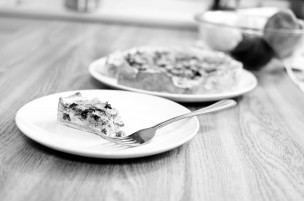 I go through phases of making the same thing. I’ll usually change up my recipe repertoire a little bit, but I ultimately make the same dish repeatedly until either I’m tired of it or I’ve perfected it. Since there’s no such thing as perfection in cooking, the former is really the only situation in which I find myself.

During a recent gap in recipe obsessions, I remembered how much I like quiches—and tarts. I was vaguely unsure as to the difference and had been referring to them interchangeably until one of my housemates asked me the precise difference between the two. Just so we’re all clear, both tarts and quiches have pie-like crusts and can be either savory or sweet (though quiches more often tend to be savory). It seems as though the only real difference between the two is that quiches inherently have an egg and milk (or sometimes cream)-based filling while tarts can be filled with anything.

It seems, therefore, that what I’ve been making for the most part has been tarts, as I have rarely used milk in the filling. Tarts tend to be a little richer as the filling isn’t as diluted, but an egg and milk quiche filling can be quite delicious as well.

This general format of the tart is very versatile, so it can be changed to fit the whims of your stomach or the intended meal. I usually use sweet potato, caramelized onion, and some kind of leafy green, but I’ve also done it with caramelized onion and bacon (which was delicious). Try different combinations for different occasions.

This recipe looks very complicated, but don’t be intimidated! You won’t regret the commitment. If you’re lacking ingredients, make friends with an upperclassman who has a well-stocked kitchen and promise to pay a tax of at least one slice.

For the glaze (optional):

2. Cube butter into 1/4 inch (or smaller) pieces and mix into dry ingredients. Mix with two forks, a pastry blender, or a food processor until mixture resembles a course meal.

3. Beat egg yolks with cream, then stir into flour mixture until it starts to form a ball.

4. Mold dough into a six-inch disk and wrap in plastic wrap. Refrigerate for two hours or freeze for 30 minutes.

6. Peel and chop sweet potato into 1/4 inch cubes. Toss with olive oil and a pinch of salt then spread cubes evenly on a small baking tray lined with foil.

7. Place in oven for about 10 minutes, until soft.

8. While potatoes cook, sauté onion for about 2-3 minutes, then add 1/4 cup water and allow the onion to absorb it (this will help to soften!).

11. Combine all ingredients (including eggs and cheese) in a mixing bowl and stir to combine.

13. Roll dough into a 14 inch round. Fold gently into quarters and transfer to pie tin, unfolding the same way it was folded.