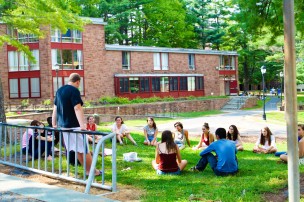 This year’s New Student Orientation (NSO) features several modifications from former years, changes that its organizers hope will enhance the sense of community that is imparted to incoming freshmen during their first few days on campus. The changes include the rescheduling of the Community Standards and Responsibilities event, the restructuring of We Speak We Stand, the introduction of small group meetings during orientation, and a new theme.

Director of Orientation and Student Activities and Leadership Development Elisa Cardona explained that each of these four major changes reflects the new theme of access, equity, and inclusion.

“When I look at the whole program this year, it’s really about how we build community and how we build a community that is inclusive, accessible, accountable, and responsible to each other,” Cardona said. “[It’s] really just [about] building those bridges early on so that the lines of communication and the relationships that we’re building during orientation are meaningful and about leaving a legacy at Wesleyan.”

In past years, incoming students spent their first evening at the Community Standards and Responsibilities event, where they heard from members of the Honor Board, members of the Student Judicial Board, Dean of Students Rick Culliton, and Public Safety officers. This year, however, this event took place on the second night. Vice President for Student Affairs Michael Whaley explained the reasoning behind the decision.

“[In the past] it was kind of weird because it was like, ‘Welcome to Wesleyan!’ and then, ‘Don’t do this, don’t do that, don’t get in trouble,’” Whaley said. “We decided that the safety stuff is all really important, obviously, but we wanted them to feel welcome and to begin getting connected and get settled and so forth.”

Community Standards and Responsibilities was not the only NSO event to be reorganized. We Speak We Stand, in which student participants present monologues addressing sexual violence and alcohol use, also changed from former years. In the past, this event was held in two locations: Crowell Concert Hall and Memorial Chapel. Students in one location would first see the presentations on alcohol and then those on sexual violence; students in the other location would experience the sexual violence-related content before the alcohol-related content.

This year, all freshmen attended the event together in the hockey rink, where the performance addressing sexual violence preceded the one discussing alcohol. Sexual Assault Resource Coordinator Alysha Warren explained that in the past, there had been discrepancies in the program’s reception based on which performances the students saw first.

Cardona also noted the importance of ensuring that the sexual violence-related content was not treated light-heartedly.

“You can’t exactly go into talking about sexual violence and sexual assault giggling, because then you’re not really taking it seriously,” Cardona said.

Caillin Puente ’15, a member of the Sexual Violence Action Committee and Students for Consent and Communication, explained that one of the goals of these groups is to make sexual violence programming a regular part of the year, not just something concentrated around special events.

“The plan for it was to make sure that sexual violence was presented as its own issue,” Puente said. “We also talked about making sure there was a more structured conversation afterwards so the issue didn’t get lost in the hectic orientation process. After seeing We Speak We Stand, our [freshman] hall didn’t have a very long conversation about it, so hopefully with the new program the incoming freshmen will have more tools to discuss and reflect on the presentation.”

Though in former years freshmen would meet with their halls for such discussions, this year they are meeting in small groups that do not necessarily contain other students from their hall. Each group contains about 20 to 30 students and is somewhat residentially based: groups were drawn across Clark Hall and 200 Church; Bennett Hall, West College, and Nicolson Hall; and the three Butterfield dorms.

Cardona explained that, given how well small groups have functioned in the past during International Student Orientation, NSO organizers were inspired to use the same approach for all incoming students. The small groups will meet every day during orientation to check in about their experiences, participate in team-building activities, discuss the events of the day, and prepare for the next day.

“We really are trying to build communities based around area because the students will have all year to get to know who’s living on their floor, and orientation really is about expanding your breadth of who’s a part of this community, who’s going to be in this community with you, and what that experience is going to be like,” Cardona said.

Another motivating factor behind the small groups is the importance of consistency in the messages that students receive during orientation. Cardona hopes that when students hear important information from Orientation Leaders (OLs) and Resident Advisors (RAs) who may not be their own RAs, they will understand that everyone is getting the same message.

“The RAs are in a really precarious position on campus—it’s their responsibility to build community, but it’s also their responsibility to hold students accountable for their behavior,” Cardona said. “Our hope is that with the small groups, instead of the hall meetings, they’ll be able to get the perspective from OLs and RAs who might not necessarily be their RA, but who are all still saying, ‘We are a community of care, and we are a community of responsibility and accountability, and in order for us to do that, we need to respect each other.’”

Furthermore, the small groups will expand the number of upperclassmen to whom freshmen have access as a resource: now, new students will get to know OLs and other RAs, as well as their own RAs.

“I think that [this] fundamental shift in the program is going to shift the way that first year students understand our Wesleyan community and the responsibility within our community to really challenge us to be a community of care and responsibility,” Cardona said. “That takes work, that takes care, that takes respect, and that takes understanding and communication and acceptance and inclusion.”

The final change to the NSO program was the introduction of a new theme: for the first time in several years, the First Year Matters portion of orientation does not have an environmental focus. Rather, the theme is access, equity, and inclusion, particularly relating to the Association of American Colleges and Universities’ Making Excellence Inclusive initiative.

Cardona emphasized the particular importance of discussing diversity with students as they begin their college careers.

“If we can talk about [our differences], then it becomes much easier for us to be in community with one another,” she said. “I just think it’s a great opportunity to really say to our first year students, ‘You’re coming to Wesleyan, and diversity is important. It’s important to all of us. And we’re going to start the school year by sharing experiences with you, by letting you know that there are so many different things that you could be experiencing here if you just open yourself up to a new perspective or a new opinion.’”