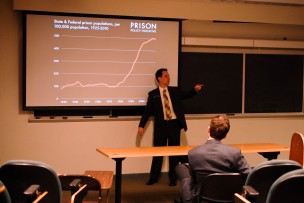 The risks and ramifications of prison-based gerrymandering were the topic of a discussion in the Public Affairs Center on Wednesday night. Founder of the Prison Policy Initiative (PPI), a think tank based in Massachusetts, Peter Wagner led the event, “Protecting Our Democracy from the Prison Industrial Complex: AKA Ending Prison-based Gerrymandering.” Connecticut State Representative Matthew Lesser ’10, who represents Middletown, participated in the discussion. The talk was hosted by Democracy Matters and cosponsored by the University’s chapter of the American Civil Liberties Union of Connecticut (WesACLU).

The premise of prison-based gerrymandering is that prisoners are counted as constituents in the district in which they are imprisoned. As a result, the communities from which they originate are underrepresented.

“The problem arises when a political representative gets elected using the inmates as voters [and] constituents and then can turn around and use the law against those inmates to keep them from being able to vote,” said Campus Coordinator of Democracy Matters Alicia Gansley ’15. “It basically gives more political power to these certain districts [while] diluting the [impact of] districts that the inmates come from.”

According to Gansley, this systematic redistribution of the incarcerated population in our national census has a negative impact on the overall organization of political districts.

“People from the communities that [the prisoners] come from that can still vote and that haven’t been convicted of felonies [are punished because] their votes are unjustly diluted away from their communities into other districts,” Gansley said.

The topic is particularly relevant to the Middletown community because Connecticut legislators have proposed a bill that calls for the practice to be  banned. The bill will be heard on Monday, April 1.

“Our underlying mission is free and fair elections and free and fair democracy,” Gansley said. “Our main method by which we hope to achieve this is advocating for publicly-financed elections.”

With very similar interests, members of both Democracy Matters and WesACLU seek to ensure the fairness and legitimacy of the American electoral process.

“The American Civil Liberties Union is an organization committed to defending and preserving individual rights and liberties that the Constitution of the United States guarantees to everyone in this country,” wrote Vice President of the WesACLU Deren Ertas ’16 in an email to the Argus.

Wagner provided information regarding the growth of prison-based gerrymandering and proposed potential solutions and actions in order to restore the fairness of district representation.

According to the Hartford Courant, PPI found data from the 2000 census showing that over half of the state’s inmates originate from Bridgeport, Hartford, New Haven, New Britain, Stamford, or Waterbury, cities that together house under 20 percent of the Connecticut population. On the other hand, less than one percent of state prisoners originate from the five towns that together contain 60 percent of the state’s prisons— Cheshire, East Lyme, Enfield, Somers, and Suffield. The residents of the five suburban Connecticut towns with the additional contribution of prisoners to their populations have a stronger political impact than the other, more urban Connecticut districts that do not necessarily contain prisons.

A pivotal objective of the PPI is to advance the concept of “one person, one vote,” which calls for the accurate apportionment of representation based on actual population. Wagner proposes that the most ideal solution would be a change of policy in the tabulation of incarcerated people.

A similar phenomenon involving influx of students has affected communities in the past. By attending a university in an area other than that from which a student originates, ze may participate in local elections. The 2000 census failed to include Wesleyan students in the count of Middletown’s population, and as a result, the town’s representation suffered for the following decade. However, the flaw was pointed out and was fixed for the following census in 2010.

Wagner proposed raising awareness by signing a petition and sending it to Connecticut representatives. Each additional ban on prison-based gerrymandering increases awareness of the cause and increases the likelihood of a national solution.

Progress has been made toward ending prison-based gerrymandering; Maryland, New York, Delaware, and California have all passed legislation ending the practice, counting incarcerated people as members of their home communities for redistricting purposes. Hundreds of individual counties and municipal governments have also designed their redistricting to exclude prison counts.

Democracy Matters and WesACLU intend to draft and send a petition raising awareness on campus of prison-based gerrymandering. If students wish to become involved, they may contact either group.

“As Wesleyan students, we have an obligation to serve our community, especially because the Middletown community tends to be of a lower socioeconomic bracket than most Wesleyan students,” Gansley said. “We really have an obligation as people who have a lot of privileges to understand issues that won’t [necessarily] affect us but [instead] affect other people and how they affect our society at large.”