So Close Yet So Far: Students “Study Abroad” Close to Home 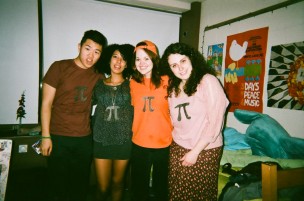 Sometimes a foreign experience can occur no further than a few hundred miles from home. For at least 50 years, students from Amherst College, Bowdoin College, Connecticut College, Dartmouth College, Mount Holyoke College, the National Theater Institute, Smith College, Trinity College, Vassar College, Wellesley College, Wheaton College, Williams College, and Wesleyan University have had the option of spending a semester or full year at one of the other schools through the Twelve-College Exchange Program. The exchange is one of several domestic-approved programs at the University, the others being Sea Education Association Semester, Semester in Environmental Science, and the Williams-Mystic Maritime Studies Program. Once administered on an ad hoc basis, the program has been run by the Office of International Studies (OIS) since 1994.

The Twelve-College Exchange used to be immensely popular, sending hundreds of students between schools each year. Now, Wesleyan typically sends one student to another school each semester, if that, and receives between one and four exchange students in return. Dean David Phillips, who works with students from the Twelve-College association who wish to spend a semester at Wesleyan, explained that the program’s popularity declined as more and more schools became coeducational and study abroad programs grew in numbers.

“It was a way to diversify the campuses, and study abroad was not as strong back then,” Phillips said. “It’s become much smaller. Part of that is because study abroad has become better structured.”

Phillips explained that the consortium was formed out of schools that were fairly similar to one another, particularly in terms of academics and campus life.

OIS Assistant Director Gail Winter, who helps Wesleyan students who wish to spend a semester at one of the Twelve-College schools, explained that the program, while smaller now than in past years, remains popular among the students to whom it appeals.

“Sometimes students go to Wellesley, Mount Holyoke, or Smith, and their reason is usually that they want to try out an all-female school for a semester or a year,” Winter said. “Or it may be that they know people who are [at another Twelve-College school], and it may be that they’d like to spend a semester with those friends taking courses in their discipline that we don’t teach here. It’s pretty individual.”

Winter further explained that some students choose to spend a semester at a school that is particularly strong in their area of focus. If students secure preapproval from their departments and take courses in disciplines that exist at Wesleyan, they can transfer back both credits and grades and factor them into their GPAs.

Katherine Gilpin ’15, who hopes to spend the spring of 2014 studying at Wellesley, explained that the program appealed to her because it offered her both the opportunity to try out a women’s college for a semester and take courses in her area of interest that are not available to her at Wesleyan.

“It’s a chance to look at courses that maybe [Wellesley] is stronger in,” Gilpin said. “Wellesley has a really strong biology and science network for women, and I think that’s really good for me. They also have marine biology there, which isn’t offered at Wesleyan.”

Gilpin added that the Twelve-College Exchange offers her the opportunity to spend a semester away from Wesleyan while remaining in the United States.

“I did not want to commit to a program where I was abroad in another country,” she said. “That’s something I’ll probably do after college, since I don’t have a specific language I’m working on or a cultural immersion studies [requirement] that I would be filling.”

Students like Gilpin, who chose Wesleyan over a single-sex school but were attracted to the prospect of an all-women’s college, find the Twelve-College Exchange appealing because it lets them experience that atmosphere for only a fraction of their college experience.

“I think that most people do the opposite, but I want to experience the all-girls [environment],” Gilpin said. “There’s a nice feel of people who are really hard-working and mutually acknowledge that…there’s a lot of support for women there.”

Yet both Phillips and Winter guessed that there is a slightly larger trend of students from single sex institutions traveling to coed schools than students from Wesleyan traveling to women’s colleges. Maja Milosavljevic, a junior majoring in math at Smith College, spent last semester at Wesleyan.

“I struggled trying to find an abroad program that would allow me to take higher level math courses…so when I found out about the [Twelve-College Exchange] at an info session it sounded just like what I was looking for,” she wrote in an email to The Argus. “Smith has been such a unique and incredible experience; however, during my first two years I was always curious how different my college experience would have been had I gone to a co-ed college…This was my chance to find out.”

Milosavljevic felt that her experience at Wesleyan differed from that at Smith primarily in terms of academics and social life.

“Maybe it was just the two classes I was in, but it was surprising to see how few female math majors there were at a co-ed school,” she wrote. “I also liked that while Smith attracts a very self-selecting group of women, Wesleyan seemed to have every type of student represented.”

Though she originally worried that it would be difficult to make friends as the only Twelve-College Exchange student at Wesleyan, Milosavljevic felt welcomed and accepted on campus.

“Now I feel like I’m a part of two schools, which isn’t something a lot of people can say,” she wrote.

Phillips explained that Wesleyan does everything possible to make the transition for exchange students as seamless and enjoyable as possible.

“We want them to have a good Wesleyan experience,” Phillips said. “We treat them as if they were transfer students: they come to transfer orientation; they do all the orientation things. Most of them come here as juniors; we give them junior status for course registration. If they’ve declared a major at their home school, we give them the opportunity to declare a major here.”

A select few students choose to participate in the Twelve-College Exchange because it allows them to fulfill requirements for a major they would not otherwise be able to complete. Alex Iselin ’14, who is spending this academic year at Dartmouth College, is doing a dual-degree engineering program. After graduating with a degree in economics from Wesleyan, Iselin will spend another year at Dartmouth and receive an additional degree in engineering.

Iselin explained that while he knew he wanted to study engineering, he wanted to spend the bulk of his college years at Wesleyan; the program, therefore, seemed perfectly suited to him.

“As a school I preferred Wesleyan, and I didn’t want to pick [Dartmouth] just because of the specific major they have there,” Iselin said. “It’s a tough major; there’s a lot of work, but I definitely think it’s a great experience, not only because of me getting to study engineering, but also [because] it’s a pretty different school from Wes. You get a different college experience.”