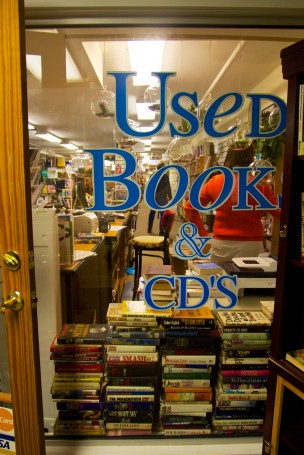 Websites like Amazon make buying used books as simple as the click of a button. But for Linda Bower, owner of the Book Bower downstairs in the Main Street Market, the tangible experience of browsing the shelves is irreplaceable.

“I know there’s that ‘Customers Who Bought This Item Also Bought’ feature, and that’s sort of similar,” Bower said. “But to me, it’s not quite the same as wandering down an aisle and letting your eyes rest on a book.”

The Book Bower, which opened in 2008 in the wake of the economic recession, certainly seems a favorable location for optical wandering. Its bookshelves, which Bower’s husband built, hold everything from cookbooks to mysteries to romance novels. For Bower, representing many genres is essential.

“I have a shelf of economic books, of which I probably sell one every year,” she said. “But what kind of bookstore would this be if I didn’t have a shelf of them? I can’t just do away with a whole category of books.”

Though Bower considers herself a longtime bibliophile, she is actually a rookie in the book business itself. Prior to opening the Book Bower, she served as Middletown’s environmental planner. After thirty years in the environmental sphere, she spontaneously decided to open a bookstore.

“I thought, ‘Well, I like to read, and Middletown needs a used bookstore,’” Bower said. “‘How hard could it be?’”

Still, Bower had to plan carefully to make her vision come to life. In order for the store to become incorporated, she had to fill out a lot of paperwork for both the city and the state. It also required some diligent searching to find a space that could hold a large quantity of books.

for her store from Craigslist and library sales. Now, her inventory comes mainly from her customers, who bring in old volumes in exchange for store credit.

“This model works for me,” said Bower. “Every sale involves cash [in addition to store credit] because I need to pay my rent and my staff, but it keeps people coming back.”

With the help of a small staff, Bower takes inventory of the books customers bring in and digitally catalogs them. When buyers request specific titles, Bower searches them on a computer program that lets her know if she has a copy available. More often than not, the customer is in for bad news, but Bower encourages an open mind when it comes to secondhand books.

“It gets disappointing when I say ‘no’ and they leave right away,” she said. “The serendipity part of having a used bookstore is that I may or may not have the book you are looking for. I would like [for customers] to wander down an aisle and let the books capture [their] attention.”

Bower has found that customers’ discoveries of books often facilitate captivating discussion. She takes great joy in hearing customers of all ages talk about the books that intrigue them and uses these conversations as a foundation from which to direct them toward books she feels might interest them.

One way in which Bower guides her customers to new reads is through the One Book, One Middletown literary project, which aims to get Middletown residents to read the same book and then discuss it. This year’s book, which can be found at the Book Bower, is “Ready Player One” by Ernest Cline and is a young adult novel set in a post-apocalyptic gaming world. Other businesses participating in the One Book, One Middletown project include the Middletown Rotary Club and the Russell Library; Bower feels she has become better acquainted with the leaders of these establishments as a result of her entrance into the Middletown literary world.

Bower occasionally gets customers from Wesleyan, though not in overwhelming numbers.

“I understand that you guys are busy and don’t have time to read outside your regular classes,” she said.

Still, Bower said she does not want to begin selling more discounted college course books solely to attract more students. Instead, she hopes to continue to cater to the general public with her wide variety of genres in stock.

“I like being in a place where there are a lot of books,” she said. “There is honestly something for everyone. When people stand next to each other and talk about a book they’ve read, that’s very gratifying.”