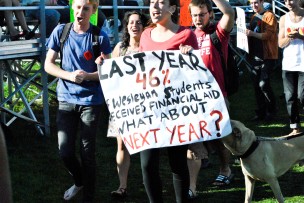 Students in favor of restoring need-blind admissions engaged in a series of protests during Homecoming Weekend, the most notable of which was a demonstration by approximately 45 students during the Wesleyan-Amherst football game.

“It was great to see people weren’t only listening to us as they walked by, but also thinking about it for themselves and asking questions and really starting to hold the whole University responsible for what it’s doing,” said Eric Stephen ’13, who participated in the protests.

The students marched on the sidelines between Andrus Field and the bleachers in between the third and fourth quarters of the game. The demonstration followed two banner drops during earlier parts of the game. The first banner, dropped from the balcony of Usdan, read “DON’T CUT AID.” The second banner, dropped from the fourth floor of the Public Affairs Center, read “DON’T DISCRIMINATE.”

During the sidelines demonstration, students carried a red and black banner, which read “DIVER$ITY UNIVER$ITY?” Other students carried smaller posters with information about need-blind admissions. During the march the students chanted, “We don’t care how much you earn, everyone deserves to learn!” They also sang the University fight song with accompaniment from the pep band.

“It went pretty well,” said Aron Chilewich ’14. “We got more people than I thought we would. It was great that we had support from people in the crowd. More than anything it’s about talking, to parents, to alumni, making sure people are aware of [this].”

Other students thought that the demonstration was successful despite the circumstances in which it took place.

“People don’t go to a football game to learn more about financial aid,” said Ben Doernberg ’13. “The event in context went over extremely well. It would have been great to have thousands of people stream onto the field, but I think it went over very well. We heard very good things from parents and alumni.”

“Not only are parents and alumni interested in what’s going on in the University more broadly, but I don’t think this is a policy that has really been broadcasted or explained to a lot of people,” Stephen said. “I think a lot of parents and alumni didn’t even know that it was happening, let alone made up their minds about what position to take. So just letting people know and making them aware of the shift in the policy, [that] I think people were really interested in and really receptive to.”

The issues surrounding the University’s change in policy toward need-blind admissions were enough to encourage Democracy Now! journalist Nemo Allen ’12 to both cover the demonstrations at the football game and to interview several of the students involved in the events about their opinions on the debate. Democracy Now! is a non-profit daily television and radio program primarily based in New York City that focuses on current event issues that journalists feel have not received enough coverage from more mainstream news sources.

“[Allen] had heard this was an issue on campus,” Doernberg said. “It fit in with Democracy Now!’s interests in educational accessibility as a national issue, [and] we gave him advance notice of what we were doing so he could document it. He was here acting as a journalist by observing and was not a participant.”

After speaking with several students, Allen also attempted to speak with President Michael Roth following the conclusion of the game to ask him about the decision to end need-blind admissions at the University. Allen said that when he asked him about the perceived lack of transparency in the decision, Roth initially did not reply, but after Allen continued to question him, Roth turned to the camera and responded.

Allen wrote that Roth then took his microphone and began to walk away with it.

“I continued trying to ask Roth questions and demand[ed] he return my microphone but was so shocked by his actions I could hardly articulate [anything],” he wrote.

The video that Allen took of the incident then shows Roth approaching a Middletown Police officer. Roth told the officer that Allen was following him around with a camera and that he did not know who Allen was. He then introduced himself to the officer and said that he was unsure about the legality of Allen’s filming. Roth then said that he had Allen’s microphone.

The police officer asked Allen if he could speak with Roth for a moment. As Roth and the officer walked away from the camera, Allen took a few steps forward, at which point the officer told him that this could be interfering with the officer’s job and could lead to Allen’s arrest.

“It wasn’t my goal to make President Roth look like a lunatic,” Allen wrote. “I came to do a story on need-blind, I wanted a legitimate interview, the official line from the highest up. I kind of feel sorry for him—Roth must be under a huge amount of pressure to have snapped like that. But I also find his hostility and authoritarian behavior totally unacceptable. A university president cannot be ripping microphones out of reporters’ (or alums’) hands, [and] cannot be someone so disconnected he thinks he can point to himself and say, ‘I’m Michael Roth,’ and expect the police to arrest whomever happens to be troubling him. And he absolutely cannot manhandle his students.”

According to Roth, he was simply reacting to what he characterized as Allen’s aggressive attempts to interview him.

“The person who claimed to be from Democracy Now! stuck a camera in my face and was badgering me as I left the stands with the crowd,” Roth wrote in an email to The Argus. “I was completely taken by surprise, and he was aggressive. I did not ask the police to arrest him, but I did ask the first officer I saw to stop him from harassing me.”

Daniel Plafker ’15, who witnessed this encounter, said that he believed Roth showed a lack of professionalism in this situation.

“The amount of professionalism and composure that we’ve seen out of Roth for the past couple of days have not really been what you’d expect from an administrative official in his position,” Plafker said.

Another encounter involving Roth and need-blind admissions activists also occurred last Saturday, before the football game and the incident with Allen. Several students were chalking in support of need-blind admissions on Wyllys Avenue, which is adjacent to sidewalks that the University controls, though the street is not officially owned by the University. Students say that they had verified with both Public Safety (PSafe) officers and Middletown’s city government that they were allowed to chalk on the street, despite the fact that it is prohibited on the University-owned property adjacent to it.

Students said that while they were chalking on Wyllys, Roth attempted to physically restrain them in order to bring them to PSafe officers for disciplinary action.

“I…had put away the chalk I was using and was re-entering Usdan when President Roth came out of the doors,” Anwar Batte ’13 wrote in an email to The Argus. “I greeted him, and he informed me that he planned to have me disciplined by Public Safety. While we walked to the Public Safety officer already on Wyllys, I tried to explain that I had somewhere to be at 12:30, which was the approximate time, but Roth informed me that that wasn’t going to happen and locked his arm around mine, in an apparent attempt to ensure I didn’t leave. I found that rather unnecessary, since I was already walking with him and had made no physical starts at leaving the area.”

According to the students, Roth then took Evan Bieder ’15, another chalker, by the backpack and told a PSafe officer to write both students up. After speaking with both students, the PSafe officer wrote down their WesID numbers, but so far no action has been taken against either student.

“I thought it was just kind of a joke because I didn’t think [Roth] would actually restrain Anwar,” Bieder said. “I’d assume that wasn’t within the rules, that Public Safety might have that authority but the President didn’t.”

Roth later noted that he believed the students were acting in violation of the University ban on chalking.

“When I saw two students chalking, at least one on Wesleyan property, I asked that Public Safety document the incident,” Roth wrote. “We have a process to determine whether they were in violation of the Code of Non-Academic Conduct. I have a great deal of respect for those making the case for need-blind admissions, even more for those who are calling for more financial aid. As I’ve said before, I am not overly focused on writing things with colored chalk, but I thought that there was violation right in front of me that I shouldn’t ignore. If I turn out to be wrong about that, I certainly owe the two students an apology.”

The final need-blind activist effort of the weekend was a short, impromptu speech given by Peter Myers ’13 before the start of the Parents’ Assembly Sunday morning, of which Roth was the main speaker. During his speech, Myers asked parents if, given what they know about the need-blind issue, they feel comfortable with the University discriminating against poor and middle-class students. The speech was followed by a brief round of applause from parents as well as activists in the room. Roth had not arrived at the event by the time the speech was given.

The students involved in need-blind activism seemed satisfied with the success of the demonstrations during the Homecoming Weekend.

“I think overall the goals for this weekend were to let people know what’s going on and that there’s another way forward than the one the administration is advocating. I think we were effective on both those fronts,” Doernberg said.