Lawsuit Filed Against Wesleyan and Beta 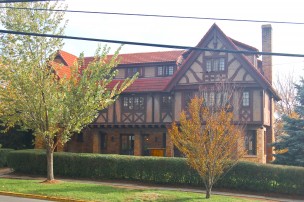 Nearly two years after being sexually assaulted at the Beta Theta Pi (Beta) fraternity house on the night of October 30, 2010, an anonymous former student has filed a federal lawsuit against the University. She is also suing the national Beta fraternity, the local Mu Epsilon chapter, and the Raymond Duy Baird Memorial Association, which owns the Mu Epsilon property.

The assailant, John O’Neill, was a non-student and a guest of a Beta brother that weekend. He plead no contest to unlawful restraint and is currently serving a 15-month sentence at a correctional institution in Somers, Conn. The victim of the assault, a Maryland woman referred to in the 27-page lawsuit as “Jane Doe,” is suing for an unstated amount greater than $75,000.

The suit claims that both the University and the fraternity failed to do enough to prevent such an assault from occurring, and that the University did little to help the student after she reported the incident. The suit accuses the defendants of failing to uphold Title IX, the federal gender-equality law. According to Title IX, educational programs receiving federal funding cannot allow discrimination on the basis of sex.

“When you seek to obtain taxpayer-supported funding from the federal government in this context, you make an agreement to abide by certain federal statutes that are designed to protect women from gender-based discrimination,” wrote Timothy O’Keefe, one of Jane Doe’s attorneys, in an email to The Argus. “We plan to prove to a jury that Wesleyan University did not live up to its end of the bargain in this circumstance.  As a result, one of its young, female students suffered significant life-altering harm.”

The lawsuit alleges that the University did not adequately warn students to stay away from the fraternity preceding the incident.

On March 5, 2010, Assistant Vice President and Dean of Students Richard Culliton and Vice President for Student Affairs Mike Whaley sent an email to students warning them that, as Public Safety did not have jurisdiction at Beta’s off-campus house at the time, the University could not guarantee students’ safety there. However, Doe was not yet a student at the University when the email was sent. The lawsuit states that she was unaware of the potential dangers when she attended a party at the house.

According to the lawsuit, the plaintiff, a freshman at the time, reported the assault to her Resident Advisor (RA) the day after it occurred, but her RA did not report it to an administrator. It further states that once Doe was able to report the incident to an administrator, it was recommended that she go to the hospital, but that she was not offered transportation or accompaniment.

Afterward, the suit reports, when Doe began to suffer academically, administrators aware of her situation did not suggest that she lighten her workload, nor did they offer any additional academic support despite requests. Eventually, Doe transferred to another school.

“The lawsuit makes some very serious allegations against Wesleyan and the Fraternity defendants,” O’Keefe wrote. “We intend to present evidence that the defendants were negligent in the handling of this matter.”

According to the lawsuit, two students reported being sexually assaulted at the Beta House during Halloween weekend of 2010. Subsequently, University administrators sent an email that advised students not to visit the fraternity.

“These recent reports have renewed our concern about illegal and unsafe behavior on Beta’s premises, as well as our concern for the safety and well-being of Wesleyan students living at the residence or visiting the house,” Director of Public Safety Dave Meyer, along with Whaley, wrote in an email to students dated Nov. 9, 2010. “We remind all members of the community that this privately-owned house does not have any formal relationship with the University. Further, we advise all Wesleyan students that they should avoid the residence because we cannot establish the safety of the premises.”

Controversy regarding the lack of jurisdiction of the University over the fraternity culminated in an email sent in February 2011 with an announcement of a new University policy that appeared to ban students from attending off-campus social gatherings and from residing in off-campus housing beginning in the fall of 2011.

“President Roth asked for this policy revision to address the problematic issue of having residential organizations that appear to function as Wesleyan entities yet have no Wesleyan oversight,” Whaley wrote in an email sent to students on Feb. 14, 2011. “DKE, Psi U, and Alpha Delt are recognized as part of program housing and are thus not affected by this change. This revised policy would, however, have major consequences for Beta which has chosen to not participate in program housing and is therefore not recognized by the University.”

Many students reacted angrily to the announcement and said it was too broad in nature. It was subsequently revised, and Beta agreed to return its still-privately-owned house to campus as a program house. However, before revisions were made, some Beta members and other upset students held “Free Beta” protests around campus.

According to the lawsuit, Jane Doe, whose identity had allegedly become known to some Beta members, felt targeted by such protests.

“These ‘Free Beta’ protests sexually harassed and intimidated Jane Doe and, likely, any woman who would report sexual violence,” the lawsuit reads. “They also restricted her movement on campus and her access to educational opportunities.”

The lawsuit further claims that although the assailant is not and never was a member of the fraternity, Beta members are still partly responsible for failing to prevent such conduct. It cites the Office of Residential Life’s “Community Standards and Residential Regulations,” which states that, when residents host a gathering, they will be held accountable for the actions of their guests, and that if guest activity causes any harm to persons or property, both the responsible person and the hosts may be held financially responsible. Whether or not this applies when students are in an off-campus house is not clear from the policy.

The lawsuit also alleges that Beta has had a history of sexual misconduct.

“Beta House, its residents, and members of Fraternity Defendants [the local Mu Epsilon chapter and national Beta Theta Pi fraternity] have a long-documented history of sexual misconduct at this location including, upon information and belief, numerous sexual assaults of women and other circumstances resulting in injury to and hospitalization of students,” the lawsuit states. “Fraternity Defendants’ misconduct was so pervasive that Beta House earned a reputation on Wesleyan’s campus as the ‘Rape Factory.’”

According to Beta members, such a reputation for mistreating women, if it does exist, is not deserved.

“Our concern first and foremost is for the well-being of the woman involved in this situation,” Mu Epsilon president Elliot Albert ’14 wrote in an email to The Argus. “Our Fraternity prides itself on the respectful treatment of all women—at all times.”

A statement issued by the local Beta chapter and members from the administration of the national fraternity echoed Albert’s sentiments.

“Beta Theta Pi has long prided itself on the respectful treatment of all women,” the statement reads. “With hundreds of women serving as chapter advisors, house directors, and educational faculty to 8,000 undergraduate Beta students across North America […] and a full roster of women working in senior-level management positions at the Fraternity’s international office in Oxford, Ohio, Beta has a long-standing culture and reputation of inclusivity, respect for all and a pointed focus of developing character and integrity in its members.”

Many students have objected to the claim that Beta was at any point colloquially labeled a “Rape Factory.” One anonymous senior said that he had never heard the term used before the lawsuit.

“This point [regarding the term ‘Rape Factory’] keeps coming up when I talk to kids about this,” he said. “Either the media, or the lawyer, or someone must have made it up.”

This student objected to the stigmatization of Beta that he has noticed during his time as a Wesleyan student.

“I think it’s problematic,” he said. “Any kind of stigma is just a generalization. To generalize that as a group all Beta members are rapists is really terribly misguided and just wrong.”

The case has garnered attention from national media. The Hartford Courant released an article about the lawsuit on Friday, Oct. 5, which alerted many members of the University community to the situation. Soon after, The Huffington Post, Salon.com, Gawker.com, and numerous other online journals reported on the story.

Reactions to the news among members of the University community have been strong. One anonymous graduate of the University shared hir anger by beginning a blog called “Bad Publicity Wesleyan,” which states that its purpose is to change campus culture and empower potential targets of sexual assault. The blog contains pictures of buildings on campus, including the Memorial Chapel and Beta’s house, with phrases like, “Rape Factory,” and “Take Revenge Now,” respectively, written across them.

“The very institution of Wesleyan upholds policies that protect assaulters and shuts off options for victims in favor of a code of silence to protect the image of the university and its stratospherically privileged student body,” the anonymous blogger wrote. “It is time to take matters into our own hands and take power from the rapists and their defenders.”

“No Wesleyan student should feel unsafe on campus,” the petition reads. “As alumni we are demanding that Wesleyan ensure it has done everything in its power to protect students both past and present from reported incidences of sexual misconduct…. A public and comprehensive audit is the best way to move toward policies that better ensure student safety and support survivors of crimes.”

On campus as well, the lawsuit has sparked discussion and reflection. Several students who were not present when the assault took place also expressed surprise when they first heard about the lawsuit.

“I’ve heard people talking about it, and I’ve initiated conversation about it,” said Anna Cocuzzo ’16. “I think that if people read up on it they would find it very shocking what happened to her. It’s something that you totally wouldn’t expect to happen at Wesleyan. That’s really not the image I had of the University when I decided to come here.”

Another first-year student who wished to remain anonymous said he was also struck by the news.

“My friends and I have talked about it,” the student said. “I found it really surprising. I think the University should have tried harder to be more available to [the victim].”

One senior who also wished to remain anonymous does not see the University as culpable.

“This incident has caused a lot of pain and suffering for the survivor,” the student wrote in an email to The Argus. “However, I do not believe that what happened to her is the fault of the University as Wesleyan makes great efforts in educating its staff, particularly Residential Life student staff, to deal with and assist in situations such as this. On the other hand Beta and the students that threw the party should be sued and face criminal action.”

As of now, it is unknown when, or if, the case will go to court.