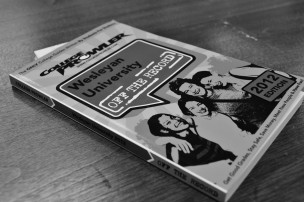 If there is anything in my teenage years that resembles an early mid-life crisis, it is the college application process. Long, tedious, and stressful, the process demands a constant examination of one’s academic and personal life. Everything is reduced to a series of statistics and numbers. The only thing that actually defines one student from another is the measly two-page essay about that one Profound Moment. It’s a miracle that anyone survives.

In addition, there is also the problem of choosing to which schools one should apply. Many students resort to a selection of college guidebooks—Fiske’s, Princeton Review, and College Board—as well as online and paper reviews like College Prowler. High school seniors desperately try to grasp the essence of each university and evaluate the specific criteria they think matters most.

In a few short pages, these college reviews claim to offer definitive information about each school’s academics, housing, food, and campus culture. As I marked the end of my first month at college, I asked myself, “Did Wesleyan really live up to what everyone and everything said it would be?”

I surveyed my fellow students, showing people various college reviews and asking them their opinions on Princeton Review’s ranking of Wesleyan at number 13 on its list of “Birkenstock-Wearing, Tree-Hugging, Clove-Smoking Vegetarians,” or on the C+ College Prowler gave us for the attractiveness of the girls and guys on campus.

Some students focused on the attractiveness ratings.

“The book says that Wesleyan girls are ‘unshaven and unwashed,’ and that is a little bit of a hyperbolized reputation,” said Benjamin Firn ’14. “I don’t think they deserve a C+; I think a B is more appropriate.”

While some students are more forgiving on this particular point, they noted that the College Prowler book does not present an accurate picture of the University.

“This book is not representative of the average Wesleyan student,” said Molly Stern ’14.

Another consistent student response was that of apathy rather than either agreement or dissent.

“You know, I don’t really care as much as I did way back when,” said Jason Brandner ’16. “It doesn’t really matter, since I’m already here. I made my decision and I have no intentions of changing [it].”

Other freshmen agreed and didn’t express strong feelings about external perceptions of Wesleyan.

“I mean I guess it makes sense,” said Sarah McCully ’16, in response to the ratings proclaiming the University as a hippie school. “But I don’t know. I figure that Wesleyan is less of the Birkenstocks and more of the Sperrys. It doesn’t really fit one description. It’s unique in its own way.”

I related to this sense of apathy. While I read the websites and the books, I couldn’t help but feel any overwhelming sense of “so what?” Did it really matter that Princeton Review called the University “dynamic” with a “high level of intellectual curiosity?” After all, doesn’t every other college and university claim the same thing?

“Look, I honestly just opened my computer one day and went, ‘What is this school Ted and Marshall went to?’” admitted Jack Spira ’16. “And now, I’m here. I didn’t really seek Wesleyan because people were claiming that it had great food or the median SAT scores were impressive.”

In my experience, the college selection process was so much more than statistics—campus visits and vibe held more weight in my mind. I remember my mother dismissing Wesleyan after the first of many visits.

“Oh, of course you would like Wesleyan,” she sniffed disapprovingly. “Them and all their bohemian-liberal stuff.”

Yes, mom. All of them and their bohemian-liberal stuff. But that wasn’t what really intrigued me about the school. I just stepped on campus and fell in love. There was this instant spark. I just knew that I wanted to be here for the next four years of my life.

Each book tried to portray the school with an objective hand, asking actual students to write their own feelings or opinions about the campus housing, academics, and student life. However, each student’s perspective is different, making it impossible to actually pinpoint what Wesleyan is. Similarly, prefrosh will never get the true feel of Wesleyan until they actually come and live on campus. Everything needs to be discovered and personally experienced. There is no way to describe a constantly moving, constantly active body of students without leaving out the best and worst details. If anything, each description gives only the lightest of overviews.

“Wesleyan is the best-leyan,” said Wayne Ng ’16. “And that sentiment is the only one that I can whole-heartedly agree with.”