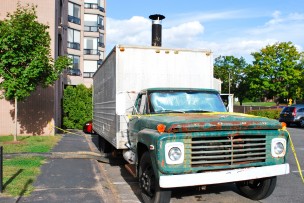 Just prior to the beginning of the Fall 2012 semester, a pipe that connected the LoRise and HiRise apartments to the University power plant broke. As a result, the University has been providing the residents of these buildings with hot water through a large truck, which contains a boiler, located in the HiRise parking lot.

“There is a pipe that connects the LoRise/HiRise complex as a whole to the central power plant, which is up the street,” Director of Utilities Management Peter Staye said. “And that pipe sends heat from the power plant to the complex. That heat is used to make domestic hot water and heat during the winter for the entire complex. That pipe is broken.”

The residents of the complex have not been notified of the pipe failure and there has been no concentrated effort to conserve water, according to Area Coordinator Brian Nangle.

“No, I don’t think I have [notified the residents],” Nangle said. “Only because I’ve been told that it’s not going to affect students. If it does affect students, then they should call Physical Plant, like they normally do.”

Grace Bomann ’14 said that she and her friends had not been notified and were unaware that a pipe had broken.

“Though I don’t personally feel offended that the University didn’t inform me, I would definitely be more cognizant of the length of time I spend in the shower, knowing that there’s now a limited supply [of hot water],” she said. “Knowing that there is a finite supply of hot water, residents of HiRise and LoRise [should] just be aware of this when taking showers. Just tell us not to take long showers.”

According to Staye, specially designed joints, which expand when the temperature inside the pipe rises, connect the different sections of the pipe. He said that one of these joints malfunctioned in late August, and the pipe has since been turned off.

“We believe one of those joints has failed,” Staye said. “There’s a gasket that prevents the water from coming out, and we’re pretty sure that’s what broke. We tried running a camera down the pipe, but we could only get to about 90 feet, and we just couldn’t push the camera any further.”

The boiler that was brought in runs on oil that must be monitored and filled as needed. This past Sunday, Sept. 16, the boiler exhausted the oil supply and residents lost hot water in their apartments, according to Staye. As a result, Bomann said she didn’t have hot water for a few days last weekend.

“I was away for two days and when I came back it was still an issue,” Bomann noted.

Staye suggested a number of temporary solutions for affected apartments. He said he has narrowed them down to two viable solutions, which both involve running a flexible pipe through the existing pipe.

“We’ve identified two products,” Staye explained. “One is known as PEX, which is cross-linked polyethylene, and the other is a synthetic rubber composite that is used in the pumpable food industry. We’re trying to make sure that we have enough space in the pipe to account for its expansion and contraction and that it will last through the winter as a temporary fix so that we don’t have to have a boiler outside of HiRise.”

Staye said that he expects the University to continue use of the boiler for six more weeks, at which time the temporary fix should be in place.

“By the time we’re done with this, I could see the University spending $60,000 to $70,000 on the temporary fix, including the boiler and the fuel that goes into it,” he noted.

The pipe also provides heat to the apartment complex. A larger boiler may be needed to meet the heating demands of the complex if the pipe is not fixed within the next several weeks.

“The boiler that’s there now is not big enough to heat the building,” Staye noted. “We’re hoping that we can get this done and be done with it. If we can’t, then we’d have to bring in a bigger boiler.”

Fixing the broken pipe will take a few months, and Staye said the University will hire outside contractors to fix the pipe next summer.

“Trying to replace the whole section of the pipe—it’s about almost 500 feet long—would take months, and HiRise would freeze,” Staye said. “In the summer, after everybody’s gone, we can rip everything up and replace it with a traditional steel-based piping system.”

The truck’s boiler will continue to provide LoRise and HiRise with hot water until the pipe gets its temporary fix.

“We’d ask everybody to be conscious of their hot water use, because the more you use, the less there is going to be for somebody else,” Staye said.