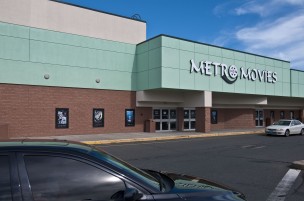 If you’ve strolled downtown some time in the past couple of weeks, you’ve probably noticed the “other Metro” across from your favorite liquor store. The charmingly sketchy “Destinta” movie theater has been rebranded as “Metro Movies,” with new management RC Theaters and a swank pastel-green paint job. I scoped out the new theater over the weekend to see if the changes were anything more than superficial. Color me impressed.

Coming into the new theater, I was confronted with a more sparse, more minimalist aesthetic than I remembered. The only promotional materials were a couple of standees for “Batman” and “Bourne” by the doors. It’s probably because they haven’t finished decorating, but the static violet hue of the walls was hypnotic and comforting compared to your average theater’s clusterfuck of posters for movies you’ll never see. Where there used to be a video arcade, there’s now a room for birthday parties.

The one striking piece of new décor is a mural above the main theater hallway. Beneath an official Middletown city seal, you see: a bunch of pieces of popcorn with 3D glasses on, the Arrigoni Bridge shooting out of a slushie container, sparkles, and a train falling off the Arrigoni Bridge about to crash into a Parthenon-esque building. It’s hard to see which Middletown building this could be other than Olin, but the excellent services and improved theaters make up for this sign of hostility toward the Wesleyan campus.

The concessions stand looks pretty much the same, but when I asked for a small popcorn the server grabbed one of those big buckets usually reserved for refillable extra-larges. Had I not caught her and asked for a kids’ size, I would have had way more food than I could handle. The popcorn is still stale and lukewarm, but these days you get a lot more bang for your buck.

With my food in tow, I proceeded down the hall to the 4:30 showing of “ParaNorman.” I chose the whimsical stop-motion cartoon for two reasons: in addition to hailing from the same studio as 2009’s “Coraline,” the movie is a few weeks old and had been relegated to one of the unused far-back theaters. This would be the true test of “Metro’s” mettle: “Destinta” provided a pretty good theatergoing experience for its main attractions, but the smaller cinemas had dirty lenses, dim projector bulbs, and horrible smells.

None of this was the case for “ParaNorman:” the digital projection was as bright and sharp as it could’ve been, and there was no lurking stink of urine or dead animals (yet). Although it wasn’t playing in 3D, the vivid colors did total justice to the detailed claymation models and creative supernatural effects. Digital conversion has been a hugely controversial process in film culture for the past few years, but even fans of the older 35mm format can agree that if there was one place that needed a change, it was “Destinta.” Unsure if the “ParaNorman” presentation was a ruse, I snuck into a few other theaters. I am happy to report that the conversion is total; you can currently see “The Odd Life Of Timothy Green” and “2016: Obama’s America” in crisp digital projection if you so desire.

This past weekend’s limited release of “The Master” signaled the start of Oscar season after the post-summer slump. I know where I’ll be spending my weekends.