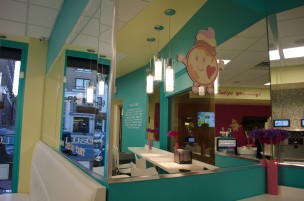 ’Twas Senior Week 2012. We were walking back from a lovely brunch at O’Rourke’s when we caught a glimpse of a sign that would change our lives. The poster glistened white, with colorful letters that popped off the page; the image was burned into our minds for the entire summer.

Prior to the official grand opening scheduled for Saturday, Sept. 15, Froyo World had begun serving up its signature product as Wesleyan students flooded back to campus. The shop is already a huge hit, not only among Wesleyan students but also among members of the greater Middletown community. Depending on the time of day, you can walk in and see a bunch of your friends, a crowd of families, or a group of business folk enjoying a mid-day snack.

Daring to check out the Friday night after-dinner scene, we went down to Main Street last weekend with high hopes and empty stomachs. After entering the shop, we were so overwhelmed with excitement that all intentions of note-taking were superseded by a strong craving for frozen delights. With eager, hungry smiles, we dove into an absurd amount of flavors and toppings.

Froyo World co-owner Susan Santoro, a resident of nearby Guilford, Conn., was inspired to open a frozen yogurt store after dropping her daughter off at the University of Miami and trying the self-serve yogurt at 16 Handles. She was excited by the idea of a healthy alternative to ice cream that is served in a way that allows the customer to make it as big, small, or indulgent as he or she wants.

In reality, it’s hard to stop at three dollars worth, and nothing sounds more appealing than ten dollars worth of frozen yogurt.

Santoro is an admitted zealot for quality. In order to ensure that she was selling only the most delicious of yogurt products, she tasted the original tart flavors at nearly all of the frozen yogurt franchises in the Northeast before deciding to open a Froyo World.

“It was the only one where the original tart had no aftertaste,” Santoro explained. “The comments we’ve had are that it tastes more like ice cream.”

As part of the traditional frozen yogurt experience, Froyo World also offers a plethora of toppings. The fruits at other frozen yogurt chains are often frozen or loaded with sugar in order to preserve their freshness. Santoro’s store, however, only buys fruit from local vendors, and she has a staff member on duty whose only job is to slice and prepare the produce.

Another quality that sets Froyo World apart is its use of computerized LED screens that hang above every flavor, clearly displaying the product’s nutrition and allergy information. In addition, Froyo World is known for its chic, contemporary design and consistent spotlessness.

Santoro said that part of the reason she chose Middletown as the location for her store is because Froyo World franchises are often in college towns. She also said that she fell in love with Middletown. When she’s not keeping her staff in check at Froyo World, Santoro is also a full time realtor, sometimes working with real estate in Middletown.

Santoro discovered her current location while showing another building on Main Street. She says that she looked across and saw an empty storefront and realized it was the perfect location for her dream frozen yogurt shop.

“Middletown is so up and coming,” Santoro said. “It’s an old-fashioned town that’s coming back.”

She went on to explain that Main Street attracts people from the surrounding communities, where there are several high schools. She also appreciates the diversity of the Wesleyan community, and she wants to encourage Wesleyan students to come to Froyo World and to play a larger role in the store.

In addition, at the official grand opening on Saturday at 11 a.m., she is looking for student groups like bands, a capella ensembles, and other performers who are interested in participating before the ribbon cutting ceremony.

Santoro is also fascinated by the environmental and nutritional values held by Wesleyan students, and supports them wholeheartedly in her store.

“The other day we had a girl from Wesleyan come in with a Tupperware container,” recounted Santoto, “and she asked my husband if she could fill it with yogurt instead of one of our disposable cups. He said ‘Of course!’”

Despite its connections with the University community, Froyo World unfortunately does not accept Middletown Cash because of franchise regulations.

“We had a student come in who didn’t have any money and didn’t realize she wouldn’t be able to use her Wescard,” Santoro said. “We gave her the yogurt for free, and of course she came back, bought more and paid us back. We want to support the Wesleyan community.”

Santoro’s generosity towards her customers is apparent. As we concluded our interview, she gave us each a cup and encouraged us to try any of the 12 flavors and 45 toppings—free of charge. You can imagine how full our cups were after two minutes of wandering around the store. Let’s just say it was as if we had walked into the “land of pure imagination” in “Willy Wonka & the Chocolate Factory.”

After three days and five servings of froyo, we managed to try all the current flavors and most of the toppings. The flavors are offered on a seasonal basis, with a few permanent options including original tart, chocolate, vanilla, cookies and cream, cake batter, one rotating fruity tart flavor, and two non-dairy sorbets.

Santoro is hoping to change the options fairly regularly to see which ones are most popular.

One quality that is noticeable in all the yogurts at Froyo World is their richness. We have found that at establishments like 16 Handles and Kiwi Spoon, by the time you get yogurt, add toppings, wait in line, and pay, your creation has become watery and unappetizing. This doesn’t happen at Froyo World. The yogurt there has less air infused into it than in other frozen yogurt, thereby giving it a richer, creamier taste. If you’re lactose intolerant, don’t worry—even the sorbet is thick and indulgent.

The current flavors, besides those previously listed, include strawberry tart, Dutch chocolate, Nutter Butter, birthday cake, salted caramel pretzel, coffee, and mango and coconut sorbets. The birthday cake is a best seller, due to its smooth vanilla base with hints of cake and subtle sweet cinnamon. We found the cookies and cream and Dutch chocolate the least memorable. The Nutter Butter and coffee flavors both deliver what their names promise, with intense flavors that use real ingredients. The sorbets were no disappointment either; the mango was thick, fruity, refreshing, and particularly well-suited to the hot weather.

However, none of these flavors held a candle to the salted caramel pretzel, which is the flavor of the month. We’ve officially deemed it one of the best yogurts we’ve ever tasted. Its sweet and salty flavor profile makes for edible perfection, and it’s still only 120 calories per half cup.

As far as toppings are concerned, Santoro explained that the franchise allows her freedom in what she chooses to serve, and she is constantly looking for new ideas. She proudly showed us a huge container of “Nerds” candies, which some of her employees told us is their favorite topping. Because of a childhood obsession with Lucky Charms marshmallows, she found a distributor that sells them without the cereal. Other memorable toppings include cheesecake that comes from a New York cheesecake distributor, brownies and other baked goods from actual bakeries, locally grown fruit, mochi, boba (or tapioca balls, the most popular topping), s’mores crumbles, a variety of liquid toppings, and a huge selection of candy, chocolate, and nuts.

None of these appeal to you? Let Santoro know. She’s open to even the most obscure suggestions.

We’ve been waiting a long time for Middletown to jump on the frozen yogurt bandwagon, and this Froyo World seems to be a perfect fit for our unique community. Froyo World is located at Main Street Market, in the same building as New England Emporium and It’s Only Natural. They’re officially opening at 11 a.m. on Sept. 15, and the first 400 customers will receive complimentary T-shirts featuring the Froyo World logo. The Mayor of Middletown, Dan Drew, and Congresswoman Rosa DeLaura will be present for the ribbon-cutting ceremony.