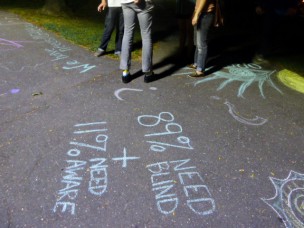 In response to the administration’s decision to cut need-blind admissions, students gathered on Foss Hill on Monday night to chalk and in Usdan on Thursday afternoon to drop a banner. Student members of the Direct Action Committee, which was formed out of the student movement to reinstate need-blind admissions at the University, organized both events in a show of support for need-blind admissions.

“I think [the chalking] got people’s attention, so I think this is something people will be talking about,” said a member of the Class of 2013 who declined to be identified because of the chalking ban. “It definitely was a small first step for the Direct Action Committee, but I think it was very successful.”

About twenty-five students engaged in chalking on pavement, lamp posts, and buildings.

“What chalking does is it introduces those [ideas] outside of the mainstream of Wesleyan ideas, and it puts them out there,” a member of the Class of 2015 said. “And when people read it, it starts making them think about these issues and it changes their minds.”

With the help of the University Organizing Center (UOC), students met in Usdan on Sunday, Sept. 2, to plan and organize in reaction to the change in University policy. The chalking on Monday night and the Thursday banner drop were their first instances of larger-scale direct action this semester. Red fabric squares with drawn-on question marks and safety pins were also distributed to be worn by students

“The pins, [the] chalking, [and] the wide dissemination of the question mark [are] just symbols we’re trying to rally around right now and create a lot of hype about,” a member of the Class of 2013 said.

The students drew a series of question marks on the path along the top of Foss Hill. Some drew pictures unrelated to the need-blind admissions issue, while others scrawled words and pictures calling for action.

“I guess it’s moreso [to raise the] questions that everyone is going to be forced to ask themselves once this new policy goes into effect,” the Class of 2013 student said. “[Such as,] ‘Did I get here on my own merit,’ or ‘did I take someone else’s spot just because I was able to pay?’ Or even questions that we can all ask ourselves: ‘Would I be here right now if this policy had been in effect when I was applying to Wesleyan?’”

Approximately 10 student members of the Direct Action Committee dropped the banner in the midst of a crowded Usdan during lunch Thursday. The approximately 15-foot long banner reading “Need-Blind Stays” was reportedly met with a round of applause. The banner was removed about 10 minutes afterward.

According to a student at the event, Usdan Facilities and Events Manager Francis Marsilli said “It was the biggest student banner violation in Usdan history.”

The students involved in the event affirmed their satisfaction with the event.

“I think it went very well,” said a member of the Class of 2013 who asked to remain anonymous. “So I think that’s a pretty good sign. We got a round of applause when we dropped the banner, and I think we got people’s attention.”

Yona Roberts Golding ’14, who was present in Usdan when the banner was dropped, expressed similar views on the effectiveness of the action.

“I thought that people in general reacted positively to it,” Roberts Golding said. It was something I was happy to see because it was a super- public display. It was well timed because it was a really busy time at lunch, and even though they took it down, it was up long enough that people saw it. I know that a lot of students are aware of the issue, but I don’t know that everyone is, so I’m glad that it provoked conversation.”

Members of the Direct Action Committee refused to publicly discuss any events planned for the future. They did suggest that they would take further actions on campus in support of retaining need-blind admissions.

“People should expect to be hearing from us, frequently and in a more dramatic fashion,” a member of the Class of 2013 said.

Several hours after the banner drop in Usdan, Wesleyan Student Assembly (WSA) Finance and Facilities Committee Chair Andrew Trexler ’14, sent an email to what is believed to be a large number of students encouraging them to sign a petition in opposition to the new need-aware policy. He urged interested students to get in contact with him.