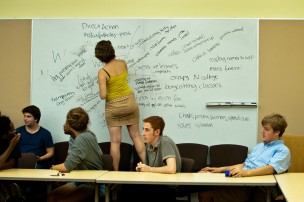 In response to the University’s announcement last spring that it would be discontinuing its decades-old need-blind admissions process, approximately 60 students met on Sunday, Sept. 2, to discuss the implications of the administration’s decision as well as what methods could be used to reverse this new policy.

“I thought [the meeting] went very well,” said University Organizing Center Intern Alma Sanchez-Eppler ’14. “I was really glad to see the number of people who turned out, and it’s good to see new faces of freshmen. I’m just hoping to reawaken people to [the fact] that this happened. It was at the very end of the year that it became a reality, which leads to being incredibly time conscious. This will start affecting people in November and even now when people are deciding where to apply.”

President Michael Roth first announced this new policy last May in an effort to deal with the problems of a rapidly rising tuition, the low University endowment, and the global financial crisis. He estimated that 10 percent of the Class of 2017 would be admitted through need-aware admissions.

“I probably would not have applied to Wesleyan if this policy was in place,” said Leonid Liu ’14. “It’s not just because of low income, but more because of the culture of inclusivity that I really liked.”

In an effort to continue the discussion, UOC Interns Sanchez-Eppler and Isabelle Gauthier ’14, along with Wesleyan Student Assembly (WSA) President Zachary Malter ’13, organized the meeting about the issue. The aims of the meeting were to explain the new policy, discuss what this policy meant for students, and brainstorm potential ways to maintain the University’s status as a need-blind institution.

“I hope that people who came in not knowing much about the issue learned something,” Malter said. “I feel like people who came in knowing a lot were able to get involved. We gained traction on presenting a student voice to the administration and ensuring a dialogue is continuing on this issue.”

During the event, many of the students agreed that need-blind admissions was an important part of the University. Several people commented that the removal of a need-blind policy could prove philosophically and culturally detrimental to the entire University community.

“This represents very much a transition in philosophy,” said Benny Docter ’14. “Currently we’ve set standards for what accessible and fair and moral mean…. This transformation now includes financial aid in the budget thought process. On its face that’s budgeting, but I think philosophically that’s really problematic. Because what you’re doing is saying, ‘Here are our costs, now how fair, ethical, and moral can we be?’ As an institution of higher learning I think we have a responsibility to say this is what we see as fair.”

Students at the meeting proposed several different ideas on how to maintain need-blind admissions at Wesleyan. These methods ranged rom outreach to University alumni, faculty, and staff, to demonstrations such as having a Speak Out in Usdan, chalking around campus, or holding a campus funeral for the former need-blind policy. Other students brought up the idea of boycotting classes in protest or even maintaining an occupation of North College, actions which were previously taken in 1992 when then President William Chace attempted to discontinue need-blind admissions for students on the waitlist.

However, some students thought such ideas were too over the top.

“I felt too many of the ideas were revolutionary or overdramatic,” said Bulelani Jili ’16. “Voicing the student complaints should probably be on a more formalized basis and in a more democratic way, rather than trying to boycott anything.”

One suggestion involved circulating a video in which students would all state another University attribute that they would willingly give up in order to continue as a need-blind institute. Many of the students present were in favor of the suggestion.

“I remember people throwing around a lot of ideas this summer, particularly having kids read off the names of people on financial aid,” said Polina Mamut ’13. “So I really liked the addition of people saying what they would get rid of or sacrifice to keep financial aid and just in general these really big direct actions.”

The meeting concluded with the formation of three groups—Media, Outreach, and Direct Action—to continue the discussion throughout the year and to take steps to bring need-blind admissions back to the University. Malter also announced the formation of a WSA-sponsored taskforce, which would work on finding alternative budgetary solutions.

Any attempt to reverse Roth’s decision would have to happen quickly, as the University administration has already begun work on how this new policy will change admissions. Yet some of the students remain optimistic about their chances.

“I think it is absolutely possible,” Mamut said. “I was talking with Rob Alvarez, [an alumnus] who did a lot of similar work twenty years ago. He was saying they [the administration] was even further along in making sure that the waitlist would not be need blind at all, and they were able to reverse that within a year. So I really think this is going to work out.”

Others students were not quite as certain about the possibility of quickly reestablishing need-blind admissions. However, they agreed that the goals discussed in this meeting were still quite important.

“Unless students are very organized and devoted, more likely than not, need-blind will not be restored [this year],” Malter said. “That said, this is not irrevocable, and I think this is the one issue in my time at Wesleyan that people care the most about. There is a possibility that need-blind will be restored if students do the work and show they care. I think they do care, but now it’s time to prove it.”