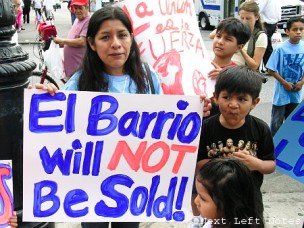 Eight Wesleyan students joined approximately two to three hundred other participants at the New York City Encuentro for Humanity and Against Neoliberalism on Dec. 4. The Movement for Justice in El Barrio, a social justice organization in the East Harlem neighborhood of Manhattan, sponsored the encuentro (Spanish for “encounter”).

“The point of the encuentro was to expand what it means to fight against capitalism and neoliberalism in 2011,” said Paul Blasenheim ’12. “[This was done] by bringing a diverse group of people together to talk about their liberal struggles and how we should unite different struggles across borders.”

The Zapatista Army of National Liberation, a non-violent revolutionary Mexican leftist organization, created the first encuentro in 1996 as an organized conversation about the struggle against neoliberalism. Because of its background, Sunday’s encuentro was intended to bring a multinational perspective.

After hearing about the encuentro from the Occupy Wesleyan Group, Rachel Fifer ’12 worked to ensure that any interested students would be able to attend the event. She planned for the trip to New York to be as inexpensive as possible and received funding from the Student Budget Committee (SBC) to pay for gas and train tickets.

“This [event] stood out to me because it was about having a conversation, where people could talk about what they thought the problems were,” Fifer said. “I thought this could be a really good thing for a lot of students here to experience an event where it’s not just screaming about change, but about hearing where people are coming from.”

Of the students who attended the event, many expressed a similar interest in hearing diverse perspectives on opposition to capitalism and neoliberalism.

The event itself contained several presentations about various social justice programs and struggles ongoing in both East Harlem and the international world. It also included a historical background on past encuentros. Several of the organizers also served on a panel to discuss the various issues they are dealing with.

“I thought it was absolutely fantastic,” Blasenheim said.  “Several social justice groups all came together to tell their stories and talk about issues such as police brutality, tenants’ rights, and more global struggles against neoliberalism, displacement, and capitalism.”

However, other students who attended the event were more critical about how the event progressed.

“Most of the encuentro that I attended was about presentations.” Migiel-Schwartz said. “I think it would have been better for there to have been more conversation among the people there, because I thought that they were the best part of it.”

“I think it was meant for people who weren’t as organized to learn from the resistance that the Movement for Social Justice in El Barrio uses, to use in their own work,” Blasenheim said.

Blasenheim also called for bringing some of the ideas brought up at the encuentro back to Wesleyan. He accused the University of becoming increasingly capitalistic.

“I think the change that it will bring will be a change here at Wesleyan,” Blasenheim said. “I think there is a lot of fighting here on campus against neoliberalism and I think that it is response to the fact that Wesleyan is beginning to run itself more and more like a corporation.”

The effect that the encuentro will have on both the University and the nation as a whole remains undetermined. However several of the student attendants cited the event’s emphasis on the effects of the current economic system on individuals as one of its strengths.

“The focus should be on these people first.” Migiel-Schwartz said. “How do we deal with social justice and market price? There’s always a tension there. And that’s what this organization and others are pointing out.”