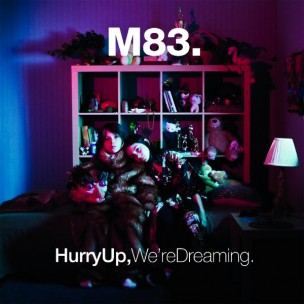 No one has ever accused M83 of being minimalist. French musician Anthony Gonzalez’s galactic-minded shoegaze project has spent the better part of the decade churning out soaring, arms-open synth-pop on a cosmic level: 2003’s Dead Cities, Red Seas & Lost Ghosts was a heady swirl of dark, ambient post-rock, laying down the band’s trademark soft vocals, surreal spoken-word interludes, and otherworldly crescendos. On 2005’s Before the Dawn Heals Us, Gonzalez took M83’s sound in a brasher, more propulsive direction, music equally suited for circa-2050 car chases and the creation of the universe. Saturdays=Youth injected the mix of 80’s pop-nostalgia, with exhilarating, if oft-cloying results. So, a decade on, where does a band with song names like “Lower Your  Eyelids to Die with the Sun” and “Highway of Endless Dreams” go from here? Isn’t it obvious? They move on to the most bloated and overwrought of musical touchstones: the double-album. One can only imagine indie-rock’s most unabashedly bombastic band’s response to the challenge: accepted.

Enter the fittingly titled, Hurry Up, We’re Dreaming, M83’s latest double-stuffed effort, dropping on Oct. 18. Interviewed in November of 2010, Gonzalez  claimed his embryonic project was moving in  a  “very, very, very epic” direction. The guy wasn’t kidding. Hurry Up is massive and unrelenting, piling on the futurist glamor and 80s worship of M83’s past albums while, for the most part, avoiding collapsing under its own monumental weight. Throughout these 22 tracks, Gonzalez and crew explore new territory, bringing in acoustic instrumentation and live strings, while couching it in their characteristic celestial bombast.

The first disc of Hurry Up opens with a chill-inducing, one-two punch: “Intro” swells slowly over synth lines and mysterious children’s spoken word. “We didn’t need a real world,” the voice whispers, before Gonzalez bursts forward, sounding more like the intergalactic rock star he was born to be than he has on any of his past work. Kindred spirit, goth-chanteuse Zola Jesus lends her mighty voice to the mix as it all reaches its crashing, wordless climax.

“Midnight City” follows, opening with one of Gonzalez’s strangest and most triumphant melodies yet. As the colossal arena-sized drums rush in, the whole songs explodes to tear-inducing new heights. It also ends with the least-forced sax solo your humble reviewer has heard in, well, far too long. Over its nearly six minute run time, “Wait” builds from simple acoustic guitar strums and swelling strings into a lushly textured  climax of drums and electronically-mangled falsetto.

“Raconte-Moi Une Histoire” springs along on a deliriously catchy acoustic bounce, with more children’s spoken word in tow. The kicker? The “Histoire” is about getting high off frogs you find in the jungle. The end of the disc is peppered with pretty, but forgettable, instrumental interludes (“Train to Pluton”, “When Will You Come Home”) and a few more hit or miss tracks, best of which is the blistering “This Bright Flash,” invoking the dark head-rush of “Dead Cities” and “Before the Dawn.”

Disc two opens with “My Tears Are Becoming a Sea,” a slow and steady crescendo that disappointingly fails to reach the glorious climax it promises. “New Map” starts as classic M83, drenched in reverb and riddled with rapid-fire keyboard arpeggios but switches gears with a minute left, concluding with the sort of orchestral groove championed by the likes of Broken Social Scene and Stars. “Another Wave From You” is another fluid, dense texture-trip, ala “Wait,” while “Year One, One UFO,” explores psych-folk weirdness untouched by Gonzalez before. It paints all the M83 tics—unintelligible spoken snippets, cascading melodies, an awesomely overblown outro—on a whole new sonic canvas. The disc closes with a handful of highlights: “Echoes of Mine” crashes and thunders forward like a cosmic battle march and “Outro” caps the second disc with a similarly chill-inducing build-up as its counterpart on disc one.

Yet, the same 80s festishism and mammoth grandstanding that drives many of the best tracks on “Hurry Up” mires several other albums: on the first disc, the  slap bass backing  of “Claudia Lewis” gives an otherwise decent song an air of over-produced cheese-funk. “Reunion” starts off like “Saturday=Youth” highlight “Graveyard Girl” but falls into a meandering, four-to-the-floor drum pattern and one of the album’s most grating hooks. On disc two, penultimate track “Klaus I Love You,” similarly starts strong, but instead of erupting, collapses into a forgettable dance groove that seems simply out of place, especially so close to the album’s conclusion.

That being said, the strength of many of the album’s tracks keeps the whole endeavor above water. Unlike Gonzalez’s earlier works, each built upon a distinct evolutionary stage of his signature sound, Hurry Up is less cohesive sonically and lyrically. Linked together by waves of ambient fuzz and orchestral prettiness, it’s a long, not particularly easy listen—something to be expected from a double album clocking in at over an hour by a band like M83. For the most part, “Hurry Up, We’re Dreaming” is M83 at their best—triumphant and starry-eyed, hair-raisingly surreal, with every blip, falsettoed cry, and crashing drum fitting into the right place. It’s overwrought, overstuffed, and overblown, an ambitious exercise in decadence and experimentation. Gonzalez set out to make a “very, very, very epic” album. For better or worse, the guy succeeded.