Once Upon a Downey 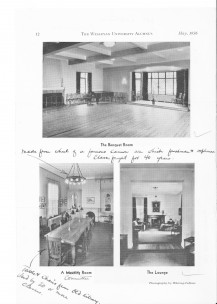 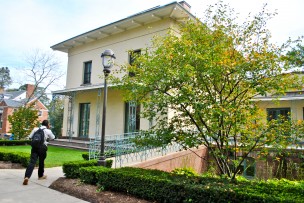 This is not another Nest or Titanium ad. This is an advertisement inviting students to drink a few beers, play on the pinball machine, and partake in beer chugging contests or Casino Nights—in Downey House.

However, this advertisement was printed in The Argus over forty years ago.

Today, Downey House is peaceful, as far removed from the social scene as students who live on Washington Street. This vibe is a radical change from the Downey of the 1970s, which was once referred to by Argus writer Joanne Smith in a 1977 article as a place of “dancing, drinking, and dementia.”

The house has an unconventional history marked by a number of surprisingly chaotic transformations, since students and administration have continually reevaluated the function that Downey should play on campus.

Built in 1841, Downey was once privately owned. Elihu W. N. Starr, who came from a reputable family of sword and gun manufacturers, was the first owner. Later, three sisters—two who taught and one who cooked—established Miss Patten’s School for Girls at Downey House until 1911. It was eventually purchased by Wesleyan University in 1922 as a faculty club in honor of former University President David G. Downey.

Downey was renovated in 1936 and opened as an informal student union—not a union designed to represent students’ interests, but rather a comfortable entertainment space for all students to enjoy. The house featured a college store, “Book Nook,” to encourage reading for pleasure, as well as a fast food counter, which was especially appealing to students whose other dining options comprised of the campus fraternities’ eating clubs. The house was home to meeting rooms, a dancing and dining room, and even guest rooms, which cost one dollar per night.

By the late 60s, most students believed the current student union was inadequate. And so the “bitching” started.

Pressure from students initiated major renovations in 1973, and a new student union was established. According to a 1990 Argus article entitled “Pinball, Ping Pong and Post Office in Downey,” it advertised three main perks: “a stereo, cheap food, and inexpensive beer.”

In addition, musicians played in the crowded basement and Downey House Grill opened, fostering competition with McConaughy Hall. There were “all-you-can-eat” specials for $1.75, and the Cardinal Pub was open to students on weeknights.

“It’s like a big relaxed party, but with none of the pressures of campus wide or frat parties. It’s somewhere that everyone is socially acceptable.”

One student frequented Downey so often that he feared for his grades.

“I wish I wasn’t flunking out because I was going so often,” he said.

There were many proposed events, including “Elvis Night,” disco dancing lessons, beer chugging contests, and a wet T-shirt contest. Other interesting events included a gong show, an “e-magic” show, and a “Three Stooges Night.”

One famous Downey House personality was a smiling, cheery woman named Fran Graham. After closing her Weenyville diner, she worked at the grill as a “dispenser of food and good cheer,” according to the 1978 issue of the Wesleyan Alumni Magazine. She was an exceptional sandwich craftswoman, and was awarded a Class of 1972 citation for her efforts: “In the middle of a chaotic scene of mini-cheese and Reuben Specials, Fran manages to maintain order and exude charm.”

Some students even wrote a poem about her to accompany the citation:

For all of the small wonders
That make men and women feel,
We honor you.

Despite the “good cheer” of Downey, however, University students were still not satisfied.

By the late ’70s, Downey was overcrowded at lunch time and suffering from financial difficulties. “Downey Holds Pickles, Lettuce, but not Enough Students,” Barbara Ann Slagg reported in a 1979 issue of The Argus.

There was also the inconvenience of Downey’s geographic location.

Hall, who had been involved with the renovation in 1973, yearned for a more desirable location on top of the Physical Plant building, between William and College Streets on High Street. This plan was seriously considered, and then indefinitely postponed by the University in 1975.

The University decided in 1984 to relocate the student campus center to Scott Laboratory and maintain The University Club in the basement of Downey as a faculty-only eating option. Much like the current Daniel Family Commons, the dining room was off-limits to students unless a faculty member invited them.

Students later discovered that the Club offered the same menu as Summerfields.

In 1999, architects were commissioned to unify the humanities departments. Renovations were completed in 2005.

Today, Downey houses the offices of English, Classical Studies, and Romance Languages and Literature departments. While it now seems unlikely that there will ever again be an on-campus alcohol distribution facility available to students, perhaps students should flirt with the idea of turning Downey House back into an updated disco bar, complete with sandwiches and lager.

More likely, The Nest and our plethora of food carts will have to suffice.