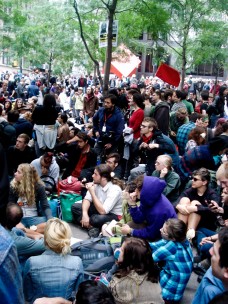 On Sept. 17, more than 20 University students joined “Occupy Wall Street,” a leaderless community currently camping out in the Wall Street area to protest inequalities in wealth distribution and corruption in corporate America.

“There was no specific goal when it started out,” said Coady Johnson ’15, who participated in the protest. “The general idea was that we would bring together a bunch of people from extremely different backgrounds who all shared a common concern about how corporations are involved in American society and government.”

The idea for this demonstration was first proposed on July 13 by the activist magazine “Adbusters.” They called for a leaderless demonstration in the Wall Street area and hoped to turn it into an “American Tahrir Square,” referring to the location where the 2011 Egyptian Revolution first started.

“It’s definitely inspired by the occupying of the square in Egypt, which continued until demands were met, [with] that demand being a little more specific than ours,” said Anwar Batte ’13. “Also it’s been inspired by the demonstrations in Spain and other Mediterranean countries, which started with a similar small group of people occupying space in order to get their demands out.”

Organizers hoped to see 20,000 people come together to join in the peaceful occupation of Wall Street. However, on the first day of the demonstration, the protester turnout was closer to 1,000.

On the first day, the demonstrators came together at Bowling Green Park in Lower Manhattan. After finding Wall Street completely blocked off by the New York Police Department, the demonstrators marched to nearby Zuccotti Park, where they have constructed a small community of tents.

Consistent with the movement’s democratic goals, decisions about the demonstration are agreed upon by a general assembly, which does not allow for any action to be taken until the protesters have reached a consensus.

“It was one of the best experiences of my life,” Johnson said. “We just became this self-contained, self-sustaining, self-governing community. We held general assemblies to make decisions on a consensus basis. Everyone was looking out for each other. We were all from different political and economic backgrounds, and yet here we were in this very lovely community.”

“Everyone there had a part in the decision-making process,” Weber said. “I think a part of that was intentional, saying that this was a real democracy as a statement against the corporatocracy and the powerful few deciding everything for many.”

By the evening of Sept. 20, the number of demonstrators had shrunk to several hundred. However, many protesters, including University students, plan to return to Wall Street to participate again this weekend.

“I think weekend numbers will increase,” Batte said. “There will be Wesleyan students going. But the core group of a few hundred is still there. I don’t think it will fizzle out. They’re settled in, barring some sort of mass arrest.”

Meanwhile on campus, students who went to the demonstration on Sept. 17 have continued the protest on campus. Around 15 students are currently camped out in three tents on Foss Hill in what they are calling “Tent City.” The students residing in the Tent City hope to form a smaller campus version of the protest currently happening on Wall Street.

“We want to keep it up indefinitely,” Batte said. “It’s the same idea as the Occupy Wall Street Protest; we’ll keep going until we see some kind of result.”

The demands of the students, while not quite as radical as some of the New York City protesters, still include substantial changes to corporate involvement in government.

“Personally, I would like to see an end to corporate personhood,” Johnson said. “Frankly, I think it’s ridiculous that corporations have the same rights as people. I would also like to see a repeal of the Supreme Court decision that allows corporations to donate infinite funds to political campaigns, because for me this is a protest over the amount of influence corporations have over the U.S. government.”

While the demonstration is still underway, Weber said he remains cautiously optimistic about its outcome.

“I think there wasn’t really an explicit goal,” Weber said. “The feeling I took away from it was that it had a lot of potential. The people who were there were empowered to reach out to other people and convince them why it was an important thing to be a part of, and I think a lot of people felt that way.”