“For the LOVE (of Humanity)” : This Weekend, The Fall Faculty Dance Concert Celebrates Joy 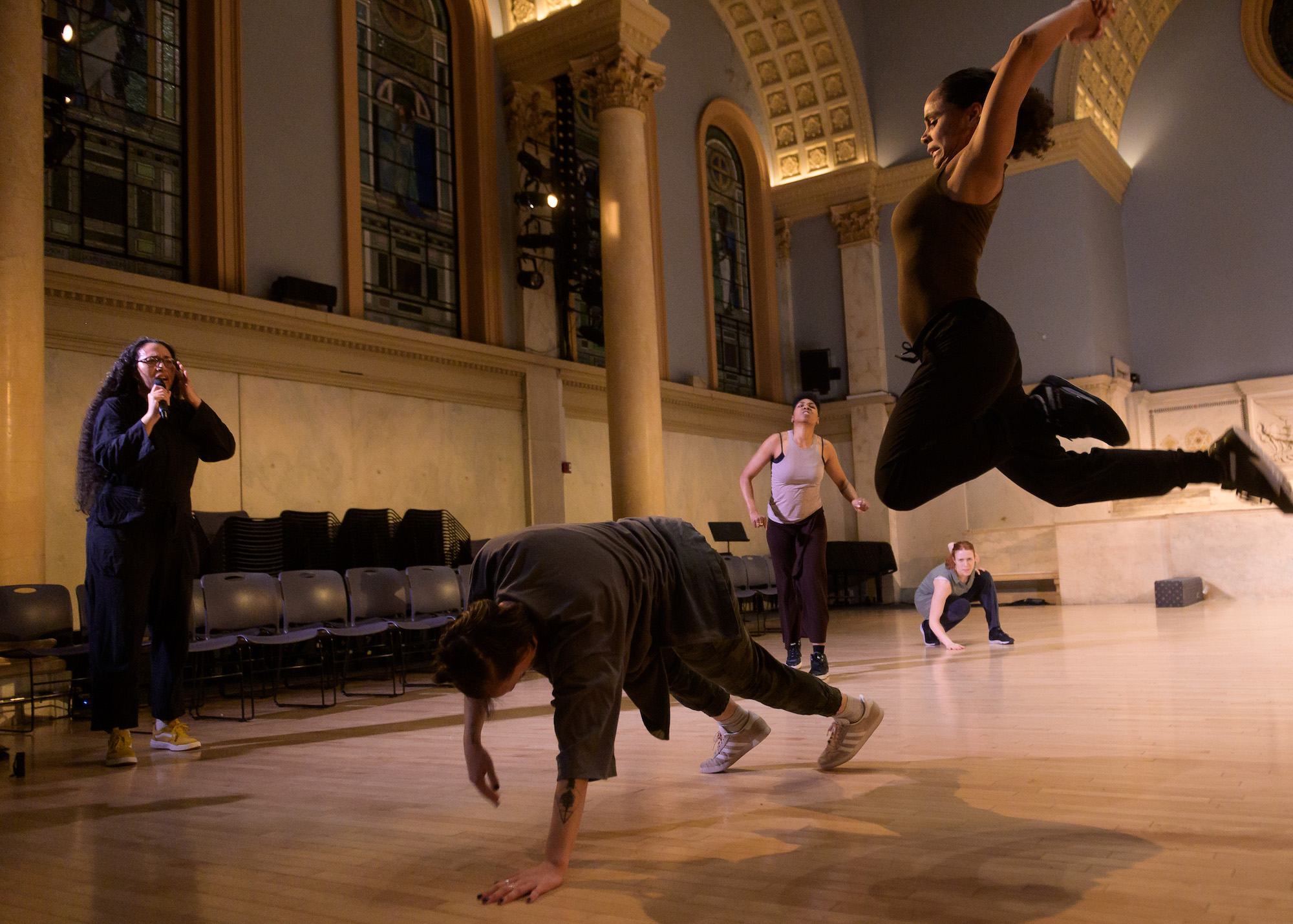 The Dance Department is presenting its annual Fall Faculty Dance Concert in the Center for the Arts (CFA) Theater this Friday, Dec. 2, and Saturday, Dec. 3 at 7:00 p.m. with masks required for attendees. The program features work from two members of the University faculty—Visiting Professor of Dance Veronica Retnaningsih and Assistant Professor of the Practice in Dance and African American Studies Joya Powell—and promises a joyous, energetic, and fun-filled evening. Retnaningsih will begin the show with a solo Javanese court dance called “Golek Ayun-Ayun.” Afterward, Powell, accompanied by University students, alumni, faculty, and company members of the New York City-based dance company Movement of the People Dance Company (MOPDC), will present a satirical, immersive and futuristic piece about the year 2020, called “What’s Left of Spring.”

Retnaningsih is making her CFA stage debut with “Golek Ayun-Ayun,” which is also known as “Nawung Asmara,” or “Being in Love.”

“Golek Ayun-Ayun” is a traditional Javanese court dance that originates from the palace of Yogyakarta, Indonesia. In her solo performance, Retnaningsih will tell the story of a young woman exploring her femininity and identity through makeup and dress. Retnaningsih joined the University faculty this fall and teaches Indonesian and Javanese Dance technique classes in the Dance Department. She has taught dance in Indonesia and beyond since 1986; she’s traveled around the world to dance and teach.

Retnaningsih is a visiting dancer from the court of Yogyakarta and is the first dancer to come to the University as part of the Wesleyan-Kasultanan Yogyakarta exchange program. Funded by the American Indonesian Cultural and Educational Foundation, the University, and the Sultan of Yogyakarta, the exchange invites Javanese musicians and dancers to teach University students. Winslow-Kaplan Professor of Music Sumarsam, who is serving as a liaison between the sultan and the University, is collaborating with Retnaningsih and his gamelan students to put on a performance later in the weekend. For the Faculty Dance Concert, they will use pre-recorded music.

In “What’s Left of Spring,” salsa dance collides with Igor Stravinsky, Twilight Zone, TikTok, aliens, and climate catastrophe in a powerful story about the year 2020. Stravinsky’s haunting arias from the classic ballet “Rite of Spring” are reimagined through innovative choreography and multimedia motifs. The witty, parody-driven work in progress prods at the question: when reflecting back on 2020, what, really, is left? And what do we do with it?

The piece is the brainchild of Powell and MOPDC. Powell founded the group in 2005 and currently serves as the company’s artistic director and choreographer. MOPDC has performed at a host of illustrious venues in the United States and beyond, including the Amnesty International Human Rights Arts Festival in 2010, the Atrium at Lincoln Center in 2015, and Movement Research at Judson Church in 2020. Now, at the Wesleyan CFA theater, “What’s Left of Spring” marks MOPDC’s first in-person show since the onset of the COVID-19 pandemic.

“What’s Left of Spring” has been in progress long before this semester—three years, to be exact. In March 2020, Powell and her company members presented it as a work in progress at Movement Research at Judson Church in New York City.

“What’s really amazing and beautiful and also makes me a bit verklempt is that some of the students and alumni who are in the piece right now actually saw that performance,” Powell said. “It feels really surreal—especially because the work itself deals with a lot of themes of time travel and multiverses.”

Back in the Spring of 2020, Powell was set to present MOPDC’s work “Song and Dance You” at the Spring Faculty Dance Concert. Unfortunately, the pandemic had other plans. But now, almost three years later, Powell has brought the same three MOPDC company members—Brittany Grier, Solana Hoffmann-Carter, and Emily Tellier—back to the University for a fully-realized performance. In addition to company dancers who have made the trek from New York to perform this weekend, University students and alumni have also joined in on the process.

“Just all of these spiralings of how people have been a part of the process is just really beautiful,” Powell said. “The fact that we get a chance to be with Wesleyan in this way is really exciting!”

“What’s Left of Spring” has moved through the past three years along with Powell and her company.

“The piece itself has been prophetic…topics and things we were talking about and exploring in the choreography [in 2019] literally happened within the year of 2020, so it’s been a hard piece to come back to,” Powell said. “We were trying to figure out…okay, instead of being stuck in this 2020 energy, how do we move forward? How do we get back to the future?”

The piece blends futuristic aesthetics with notions of tradition. With diasporic African dance forms at the root of the choreography, audience members will catch elements of house, Afro-Brazilian, jazz, dancehall, hip-hop, and salsa dance styles on stage. But the performers don’t just dance: they sing, speak, chant, and even draw.

“What’s Left of Spring” confronts the year of 2020 head-on, delving into a world of COVID-19 isolation and the political issues that framed the year.

“There are a lot of sociopolitical commentaries through the piece that are still applicable today, two years out,” performer Charissa Lee ’23 said.

With its satirical edge and embracement of total absurdity, the piece explores serious themes in a more playful—although no less poignant—manner. A commentary on the pandemic, for example, features the performers playing a game of freeze tag, but instead of tagging with their hand, the person who is it pretends to sneeze on others. Similarly, when discussing the climate crisis, performers embody different natural disasters and engage in a wrestling match.

“A lot of the show deals with serious matters [through] tongue and cheek and kind of telling the stories in ways that pokes at what’s going on in the world instead of it being really really heavy,” performer Zoe Farnsworth ’21 said. “Reality is something to create with.”

To Powell, “What’s Left of Spring” is ultimately a work in progress: the artists involved are still taking risks and experimenting rather than presenting a finalized piece.

“Things will probably change as the piece evolves,” Powell said. “[This performance] is an opportunity to just try some things out: see how they work, or if they don’t.”

This is the first time “What’s Left of Spring” is being performed on a stage with lights and a set. Assistant Professor of the Practice in Dance Chelsie McPhilimy, as the performance’s lighting designer, illuminates the multiverse onstage with textured, otherworldly streaks of bright purple and green. Even the concrete walls in the theater are patterned with geometric shapes, welcoming the audience into the cosmos of Powell’s creation. The performance is experimental and immersive: the artistry onstage stretches into the theater, inviting the audience to join in on the fun. Moreover, audience members can engage in call and response with the performers, or even sing along with their tunes. Perhaps, most importantly, the performance prompts the audience to reflect on their own 2020 experience.

While the performance deals with incredibly heavy themes and issues, it’s ultimately a celebration of resilience, joy, and hope despite the challenging circumstances of our times.

“Together, through joy, we are able to move forward,” Powell said. “It’s corny—and hard. It’s not an easy ask: joy is not easy. You have to work for joy sometimes.”