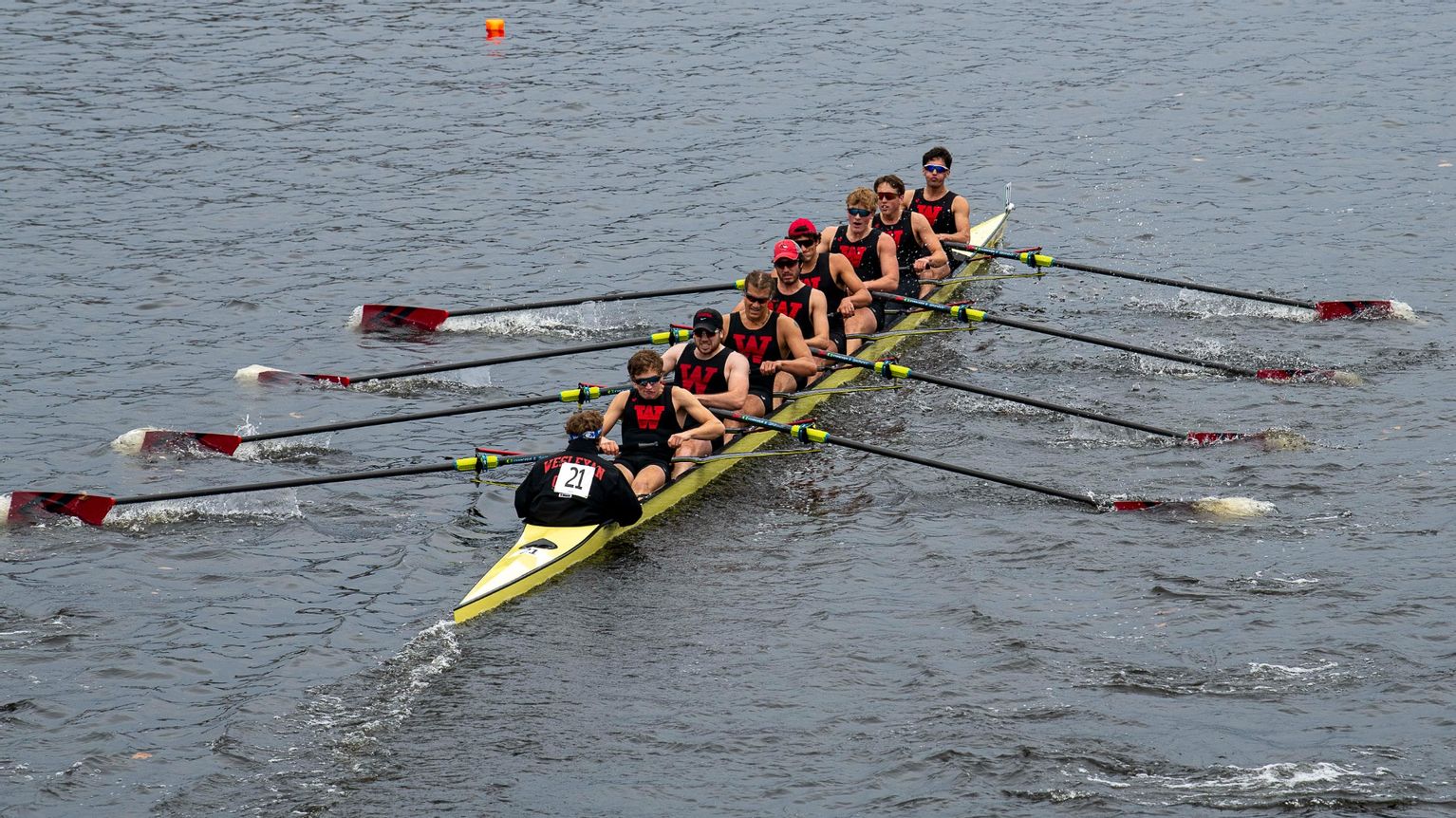 The men’s crew wrapped up their fall season towards the end of October. They were pleased by their improvement and looking forward to the progress they’ll make during winter training and show off during their spring season. With an underclassmen-heavy team, the Cardinals had great showings at their three regattas.

While this is their shorter season, with spring being their larger focus, the Cardinals worked hard from the moment they arrived on campus. Captain Joe Kagan ’23 described the team’s approach as cohesive and high-energy.

“Our season started in early October,” Kagan said. “Our fall season is an abbreviated season because there aren’t as many races; spring is our big season. We start training right when school starts. Our coach…has put the pedal to the metal, the foot on the gas [with practice]. Leading up to our first couple races, [there’s] definitely more intensity.”

Their first regatta was the Riverfront Regatta on Sunday, Oct. 2. In the men’s open 8, the Red and Black’s first boat placed second overall in a field of 18 boats. Lined up against competitive NESCAC teams like Tufts and Trinity, Wesleyan was able to finish with a time of 11:37.81, shortly after the Jumbos who finished with a time of 11:23.72 and just ahead of Trinity who finished third with a time of 11:42.93. The first boat, with Asher Israel ’26 (coxswain), Pierce Buckner-Wolfson ’26, Oliver Diamond ’23, Emmett Nunes ’23, Kagan, Nelson Bellows ’26, Paul Kiyonaga ’25, and Hugo Harington ’25, managed to secure a runner-up finish, followed by the Cardinals’ second boat taking eighth and their third taking 13th place overall.

The NESCAC is an incredibly competitive league when it comes to crew and the fall season is challenging with longer races with staggered starts, referred to as head races, but that only makes the Cardinals more excited to compete.

“Anytime we have to stack up against competition that we’re going to see in the spring, especially NESCAC schools, we’re always super hungry,” Kagan said. “That environment creates a spring-like environment. But one of the tough things about fall racing is that it’s all head racing. So you just don’t have the same competitive atmosphere as when you’re lining up next to each crew.”

These phenomenal showings come from how the team takes care in honing their strategy, where they pay careful attention to ensure that members of every boat are able to operate as a unit. Kagan noted that the team has learned to approach the fall’s longer races with more confidence.

“We were a little bit skeptical about how aggressive we could go in some of the fall races. I think we rate a head race more conservatively than a spring race,” Kagan said. “Ultimately, I think it was one factor that contributed to an improvement in performance from one week to the next. We had Head of the Charles and then Head of the Fish, and we improved by a lot relative to some of our competitors. In all aspects of rowing, you can take a big bite and try your hardest to hang on or swallow something that might appear to be too much at first, especially in spring racing, when it’s much shorter, that [ends] up being super valuable for getting really improved performance.”

Diamond added that the team’s work towards building cohesion was instrumental in the progress they made over the course of the fall season.

“[A] takeaway from the season is to trust in our fitness,” Diamond said. “We’re a young squad, and sometimes it takes time when you have people coming from a lot of different programs…for that to come together. There are some intangibles that can come together [after] a realization one day, or you change something slightly, and all of a sudden, it feels totally different. Sometimes that happens the month before a race, sometimes it happens the day before, sometimes it happens during the warm-up right before. Our ability to progress over a season was big.”

At Head of the Fish, their final regatta of the fall season that took place on Oct. 29, the Cardinals’ varsity eight boat took eighth place in a field of 17 boats. Having finished just after Tufts in their two earlier regattas, the boat (Israel, Kagan, Chris Saade ’25, Diamond, Nunes, Bellows, Kiyonaga, Harington, and Buckner-Wolfson) was able to finally overtake their NESCAC rivals at the end of their season with a time of 10:17.72. In the second varsity eight event, the Red and Black’s second boat (Rosenblum, Ewing, Bell, Saffery, Teddy Manning ’25, Kiran Kling ’23, Beaman, Jack Cornog ’26, and Andrew Steinert ’25) finished as the runner-up, defeating Tufts and Williams with a time of 10:36.77.

Wrapping up their season with a win against the Jumbos was huge for the Red and Black. Diamond was excited by the progress the team had made over the course of the season and how different the season looked compared to previous years, which were overshadowed by the ongoing COVID-19 pandemic.

“A big part of crew is being able to be right next to someone and racing and engaging with them and your training,” Diamond said. “Being back as a large group [after COVID-19] is big for us. Coming back this year, we were looking to come out and make a statement. Our first race, we lost to Tufts, who was the number two D3 team in the country last year, by about 14 seconds. Then we had HOCR, which is kind of our main race of the season that we focus on, and we lost to the same crew from Tufts by 14 seconds again. We raced them a third time at Head of the Fish and beat them by two seconds. It goes to show that we’ve been putting in a lot of work this fall and over the summer, too.”

That hard work will catapult them towards their spring season, where there are more opportunities to compete and a focus on shorter, ‘sprint’ competitions. Diamond is excited about the upcoming winter training that will take place and allow them to better their mental game, in addition to their physical capabilities.

“My favorite part of the year is our winter training,” Diamond said. We’ll do a lot of competitive pieces on the rowing machine. That’s where a lot of our fitness is gained and our speed is found for the spring. I love for that to be a fun environment that people look forward to and are excited about. There’s a whole world of mental techniques and ways you can approach those kinds of workouts. There’s a whole meta-strategy to the mental game of rowing, and I really enjoy engaging with that and teaching guys about that. I hope that stays and the enthusiasm stays.”

“Hopefully we can show that you can really turn things around quickly, especially when you have a group of people that really care about and love the same things,” Kagan said.