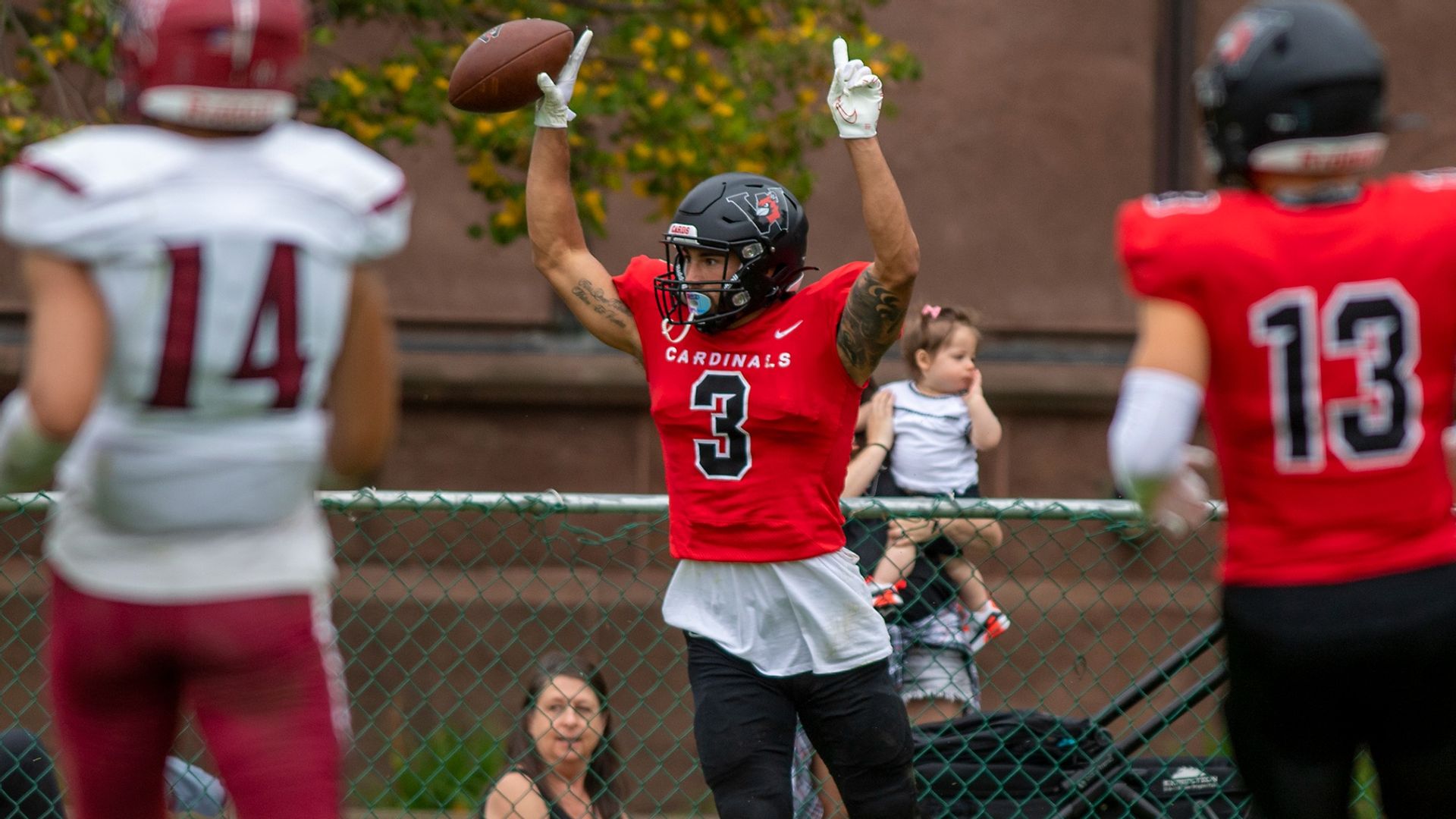 In their season opening game, the Cardinals extended their winning streak against Bates to 16 straight games in a spectacular 41–10 takedown of the Bobcats.

Coming out of a preseason that focused on cultivating a strong sense of team camaraderie, the Cards were more than ready to see their efforts pay off.

“Preseason’s always a little bit of a grind, but I think a lot of it’s team chemistry and trying to gel together as a team,” captain and wide receiver Matt Simco ’22 MA ’23 said. “We’re really close this year, even more so than past years, so I think that’s really gonna help us moving forward.”

Head coach Daniel DiCenzo noted the importance of the leadership efforts of the upperclassmen prior to the start of the season that generated the circumstances needed for an excellent season opener game.

“Our Seniors and our captains did a great job leading our team this preseason,” Coach DiCenzo wrote in an email to The Argus. “Since the end of last season, our Senior class has been focused and setting a high standard for our team. I think our players competed hard in preseason and had great work ethic. It is a very tough sport physically and mentally and we tried to put them in situations they would see in crucial moments of a game.”

Captain and quarterback Ashton Scott ’22 MA ’23 added that the individual talents each player has brought to the team this season have improved the team’s performance as a whole.

“The competition within our own team is so strong that it [has] helped everyone elevate their game,” Scott wrote in a message to The Argus.

Fueled by their strong bond and trust in their skills, the team was confident it had what it would take to achieve a definitive victory to kick off the season.

“Every season opener is always a big game,” captain and wide receiver Logan Tomlinson ’23 said. “Something that we harped on was to beat teams that we should beat dominantly as opposed to letting them hang around. We won a lot of games last year by small margins, so of course we wanted to win, but we [also] wanted to win decisively.”

The game opened on what could have been a brutal setback for the Cardinals when the Bobcats managed a 73-yard pass play on their opening drive, which resulted in Bates setting up a 1st-and-goal from the 3-yard line. Fortunately, the Wesleyan defense showed they were undeterred by the challenge and, after three failed rush attempts, captain and defensive tackle Nick Helbig ’23 (the reigning NESCAC Defensive Player of the Year) forced a fumble on the 4th-and-goal play which was recovered by defensive tackle Pat Boujoukos ’24.

Tomlinson observed that the defense’s outstanding performance on this play was critical to setting the tone for the remainder of the game.

“That’s a huge stand that’s really hard to do defensively and that can sway the course of the game,” Tomlinson said. “[If] they score first, they have confidence. When the defense gets four stops on the goal line, that’s a huge swing of momentum. So I think that early in the game, having that stand, gave us a lot of energy on offense to be like ‘okay, we gotta take advantage now.’ That does a lot for the team when you get that stop.”

The shift in power balance on the field was immediately visible as the Cardinals sent 14 plays down the field, including an impressive 27-yard completion by quarterback David Estevez ’22 M’23 to Simco. Then, a successful 30-yard field goal attempt from kicker/punter Daniel Yoon ’24 gave the Cardinals an early 3–0 lead.

Going into the second quarter, Wesleyan maintained their energy, ending a nine play 84-yard drive with 28-yard completion from Estevez to Simco, followed by an Estevez pass to Tomlinson in the end zone, who earned the first touchdown of the Cardinals’ season. Yoon then secured the extra point, bringing the score to 10–0. 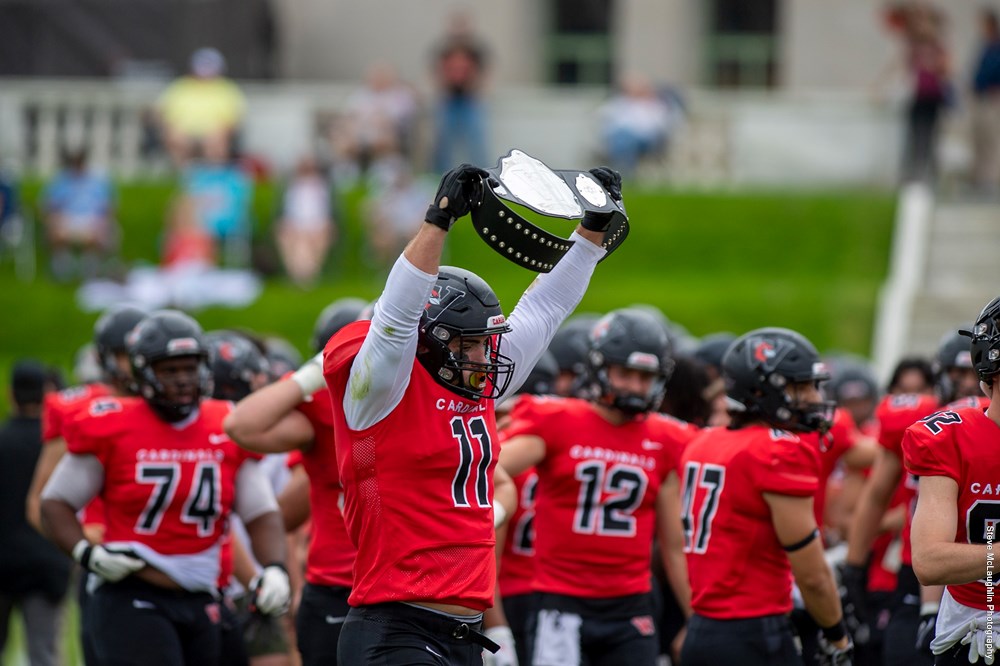 Bates also scored for the first time this quarter with a 30-yard field goal, but the Red and Black swiftly responded with a career-long 45-yard field goal by Yoon upon regaining possession, putting the score at 13–3 with the Cards still in the lead at the end of the first half.

In the third quarter, the team continued to perform excellently on all sides, beginning with captain and cornerback Danny Banks ’23 who intercepted a high pass from Bates quarterback Liam Foley in the endzone, once again denying the Bobcats a scoring opportunity.

Coach DiCenzo highlighted this play as one of the most crucial moments of the game.

“We started the second half with the ball and fumbled on our first play,” Coach DiCenzo wrote.“I was most pleased with how the defense responded in forcing a turnover of our own on 3rd down and kept Bates off the scoreboard. Our offense then scored on 3 of its next 4 possessions to help us pull away.”

Banks credits his outstanding showing on defense in part to the entire line’s ability to work together cohesively as a unit.

“Defensively, all three levels just played so lights out,” Banks said. “Personally, it just felt good to benefit from a great defensive scheme and secure an interception in the endzone. I benefit a lot from the guys in the d-line and linebackers making big plays.”

The Cardinals also landed their second touchdown of the day with a nine-yard pass from Estevez to Tomlinson, which, with another extra point by Yoon, brought the score to 20–3.

Estevez then threw his third touchdown of the game with a 25-yard pass to wide receiver Chase Wilson ’25 to get the first touchdown of his Wesleyan career, extending the Cardinals’ lead even further to 27–3.

When the Cardinals regained possession, Scott threw his first touchdown of the day in the fourth quarter with a pass to tight end Ezra Jenifer ’23 who cruised past the Bobcats’ defense, putting the score at 34–3.

Shortly after, the Bobcats scored their first touchdown of the day, but the Cards responded quickly with another of their own with a 33-yard rush by running back Kellan Walker ’25, making the final score of the game 41–10 and starting the Red and Black’s season out on an indisputable high note.

Tomlinson recognized the victory as a true team effort, with outstanding performances on offense, defense, and special teams.

“Special teams played very well,” Tomlinson said. “Our kicker was perfect. Last year, they had a big return versus us and we didn’t allow that this year. Defensively, of course, holding our team to ten points helps a ton. Offensively, we did a good job getting the ball in a lot of people’s hands. Seven players caught two or more passes. I think we did a good job giving the defense trouble by utilizing all these different weapons that we have.”

Helbig added that the team’s sense of unified purpose also played a key role in their success.

“Having guys that want to do their assignments versus trying to be a superhero and do more than they should [helps],” Helbig said. “When everyone’s on the same page and trying to achieve the same goal I think that that’s the most important thing you can have in a team.”

Coach DiCenzo is already thinking about the future and how to improve. 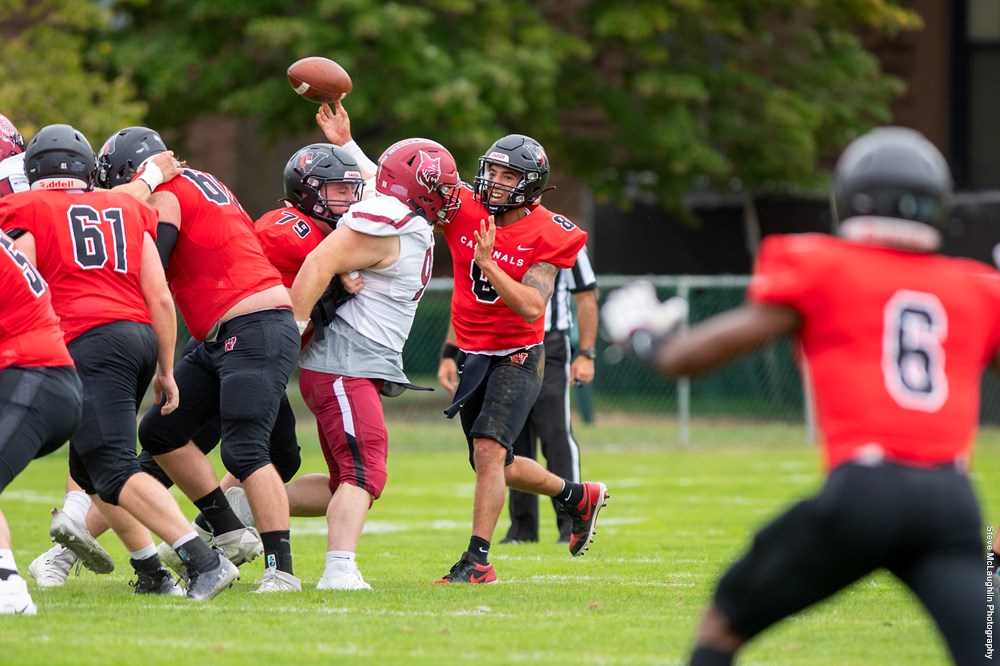 “As a program, both coaches and players need to continue to get better and learn from the good and the bad from last weekend,” Coach DiCenzo wrote. “In a team sport like football, you need all 11 players on the same page every play to have success and that is what makes it such a unique game. If we continue to get better every day and compete hard good things will happen.”

Looking forward, the Cardinals’ next matchup comes this Saturday, Sept. 24th at Middlebury. This game will prove a big test for the Cards, as the Panthers just secured their own 17–6 away victory against Amherst and Wesleyan has not had a victory at Middlebury since 2014.

Fortunately, the team is confident that they know what they need to do to take down the Panthers, as Tomlinson noted.

“We’re excited and we’re looking forward to the challenge,” Tomlinson said. “It’s about building on what you did the week prior, not getting ahead of yourself, and just thinking about Middlebury.”

After that, the Cardinals still have a long season ahead of them full of strong competition, but the team is certain that if they continue to stay the course, they’ll be ready for whatever challenges come their way.

“We just gotta keep getting better every day,” Banks said. “If we just continue to do our jobs, stick to the game plan, and buy into the foundation and the trust in the team, then we can accomplish anything we want.”

Erin Byerly can be reached at ebyerly@wesleyan.edu.