When I first started writing for The Argus four years ago, perhaps nothing excited me more than the opportunity to fire off hot takes into the print and digital ether. Allow me to explain: growing up in Massachusetts, I was introduced to the time-honored tradition of take-making at a relatively young age. Starting in middle school, I would watch ESPN in the morning while I got ready, then listen to “Toucher and Rich,” a local Boston sports radio program, whenever my dad would drive me to school (when I rode with my mom, we listened to NPR, which probably explains the weird confluence of circumstances that led me to write about sports despite going to Wesleyan). Each morning, I sat, listened, and contemplated as random men screamed their disjointed and inane opinions about sports into their cell phones. As a result, as soon as I saw the post by a previous Sports Editor on Facebook recruiting new Argus writers, I jumped at the chance to add my own voice to the swirling chorus of analysts and pundits that defined my childhood. 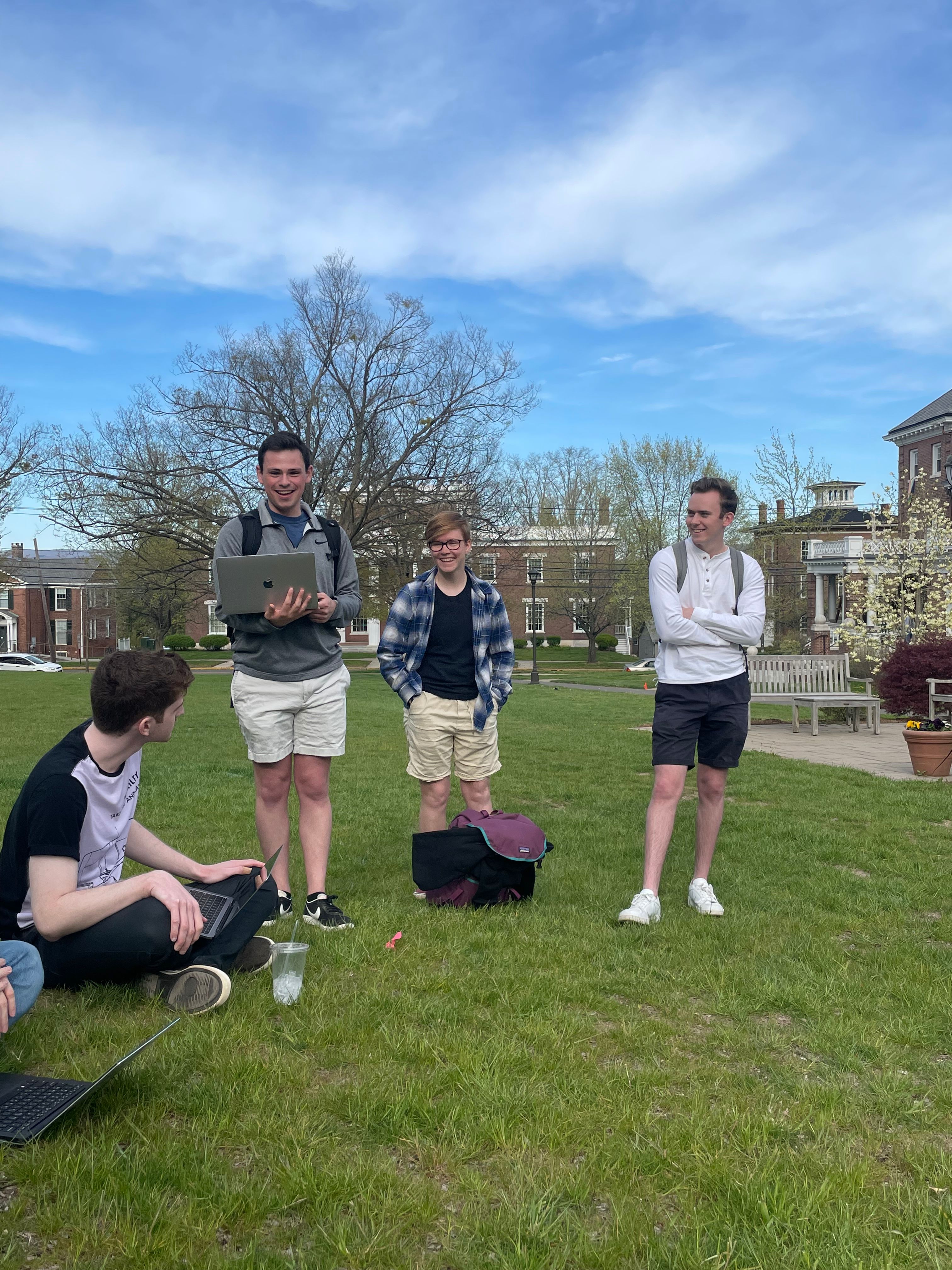 Of course, I overestimated two critical factors regarding my time as a Sports Editor. The first was the number of people at this school who actually cared about anything I was writing. The second was my actual ability to make takes that would later turn out to be anywhere remotely close to accurate. Don’t get me wrong; take-making in general is a high quantity, low-quality business. Even so, I’ve had quite a few misses over the years that I thought may be enjoyable to take a look back on as my time at Wesleyan draws to a close. For my last article for The Argus Sports section, I’d like to take a trip back through memory lane to some of my most prescient predictions and some of my most atrocious, hilariously incorrect takes over the past four years.

I began by correctly predicting that the 2018-2019 Los Angeles Lakers as they were constructed at the time would be unsuccessful, with the recently acquired LeBron James surrounded by unproven young players (Lonzo Ball, Brandon Ingram, Kyle Kuzma) and erratic veterans like Lance Stephenson. Sure enough, the Lakers finished 37–45 and missed the playoffs, although James did miss significant time that year with a groin injury. The Lakers would go on to win the championship the following year, but only after reshaping their roster by trading Ball and Ingram for Anthony Davis. So far, so good in terms of takes: I’d score this one a win.

The rest of this article, however, is only slightly short of a train wreck. I guaranteed with absolute certainty that the Golden State Warriors would win the title—they went on to lose to the Toronto Raptors in six games. I suggested that the Boston Celtics would be among the top teams in the East—their season was a dysfunctional, Kyrie Irving-fueled mess. I expected a return to form from the previous year’s number one overall pick, Markelle Fultz—five years later, he is likely one of the biggest draft busts in NBA history. At least I redeemed myself at the end by correctly predicting the Rookie of the Year (Luka Doncic) and forecasting the rise of a talented Phoenix Suns core that would lead the team to the best record in the league in 2022.

I ended my recap of the 2018 World Series, in which the Boston Red Sox defeated the Los Angeles Dodgers, by suggesting that Boston would be best positioned for future success between the two teams. Since that time, the Red Sox have let Mookie Betts leave in free agency and have alternated between being disappointing and being nearly unwatchable. The Dodgers, who signed Betts in free agency, won the World Series in 2020.

The 2019 Super Bowl also featured a Boston versus Los Angeles matchup, with the Patriots defeating the Rams. Here’s how I ended that article: “The New England Patriots are most definitely still here. And they’re never, ever, leaving.” The next season, the Patriots were soundly beaten in the divisional round of the playoffs by the Tennessee Titans. Tom Brady left in free agency and subsequently won a Super Bowl with the Tampa Bay Buccaneers. Meanwhile, the Patriots, despite showing signs of life during portions of last year, don’t look to be anywhere close to a true Super Bowl contender.

I praised the Arizona Cardinals’ selection of quarterback Kyler Murray from a talent and schematic standpoint, and in that regard, I certainly was correct. Murray had a terrific 2021-2022 season and has emerged as a bright young star in the NFL. I then went on to criticize the Cardinals for selecting Murray, given that they already had a highly-drafted quarterback in Josh Rosen that they were forced to trade to the Dolphins for just a second-round pick (I loved the move from Miami’s perspective). It turns out that Arizona’s talent evaluators were right to move on from Rosen; spending time with three different teams in four years, he has been a complete non-factor and is projected to be a fringe backup going forward.

I applauded the Seattle Seahawks for selecting DK Metcalf, an athletic freak who faced questions over his maneuverability. Metcalf has emerged as a star for Seattle, making this take a solid one. In the very next paragraph, however, I commenced the Patriots for drafting receiver N’Keal Harry, who never made an impact with the team and will likely be cut this offseason.

Getting Griffin Right: RGIII and the Spread Offense

I think history has mostly been kind to me regarding the core argument of this article, which was that Washington quarterback Robert Griffin III and coaches Mike and Kyle Shanahan helped revolutionize the NFL by introducing spread concepts from the college game. We’ll never know how good Griffin could have been if he didn’t suffer a devastating knee injury. Since his retirement, however, athletic quarterbacks in his archetype have only claimed more success in the NFL, with some of the league’s best players (such as Josh Allen and Lamar Jackson) producing as much with their legs as they do with their arms. Similarly, coaches borrowing from the spread have continued to find success, with Kyle Shanahan himself leading the San Francisco 49ers to a successful run over the past few years despite middling quarterback play.

This one wasn’t all my fault (I co-wrote the article with Managing Editor and former Sports Editor John Vernaglia ’22), but some of the analysis I remember writing for the 2019 draft was laughably bad. I was probably too harsh on Anthony Edwards, who just had a terrific postseason for the Timberwolves and looks to be a player on the rise. My even bigger miss was with LaMelo Ball, who I called a poor fit to lead an offense. Ball has been a superstar from the moment he stepped into the league, winning Rookie of the Year in 2020-2021. I was also strangely high on Killian Hayes and Jalen Smith, who have done nothing of note ever since being drafted by the Pistons and Suns respectively.

This is probably the last article I have written where enough time has passed to render judgment, and it certainly doesn’t disappoint. I began by questioning whether the Milwaukee Bucks had done enough to keep impending free agent Giannis Antetokounmpo after a somewhat quiet free agency period, with Jrue Holiday being their biggest acquisition. Just 12 days later, Antetokounmpo signed a five-year, $228 million contract extension with Milwaukee, making my analysis pretty much dead upon arrival. That season, the Bucks would proceed to win the championship, cementing Antetokounmpo’s position as a Milwaukee sports legend.

I complimented the Lakers for acquiring Dennis Schröder, Montrezl Harrell, and Wesley Matthews, arguing that Los Angeles had improved since their championship run the prior year. The Lakers would finish that year as the seventh seed in the Western Conference, and lost in the first round to the Suns. Meanwhile, none of Schröder, Harrell, and Matthews still play for the Purple and Gold.

Finally, I completely botched everything to do with James Harden last year. I implied that Brooklyn’s Caris LeVert wasn’t talented enough to be the centerpiece of a Harden trade. While Brooklyn eventually did move more pieces than just LeVert to get Harden, he was certainly a core component of that trade. I also contended that the Philadelphia 76ers should exercise caution rather than break up the Joel Embiid and Ben Simmons duo for an older player in Harden, an argument that now seems quite quaint. The Sixers swapped Simmons for Harden this season; although Harden hasn’t seemed quite the same athletically, he’s certainly been better than Simmons, who sat out the entire 2021-2022 season.

There you have it: a whole lot of misses with a moderate number of hits to redeem them. Of course, take-connoisseurs like me shouldn’t only be judged on their past successes (or lack thereof). If nothing else, I enjoyed writing these articles, and I hope you all had fun reading them. And as important as the takes were in getting me in the door to The Argus office, takes weren’t the reason why I stayed for all eight semesters. I did so in large part because of the amazing stories I got to tell about people and teams here at Wesleyan, highlighting their accomplishments both on and off the field of play. But my tenure was defined to an even greater extent by all the incredible people I’ve worked with both on the Sports staff and on The Argus masthead in general. I have no doubt that future Sports sections will continue to bring you the hard-hitting, occasionally incorrect but always thoughtful analysis that our small but loyal contingent of readers so looks forward to each Tuesday and Friday.

And for all the aspiring take-makers out there, one word of advice: stay hot.