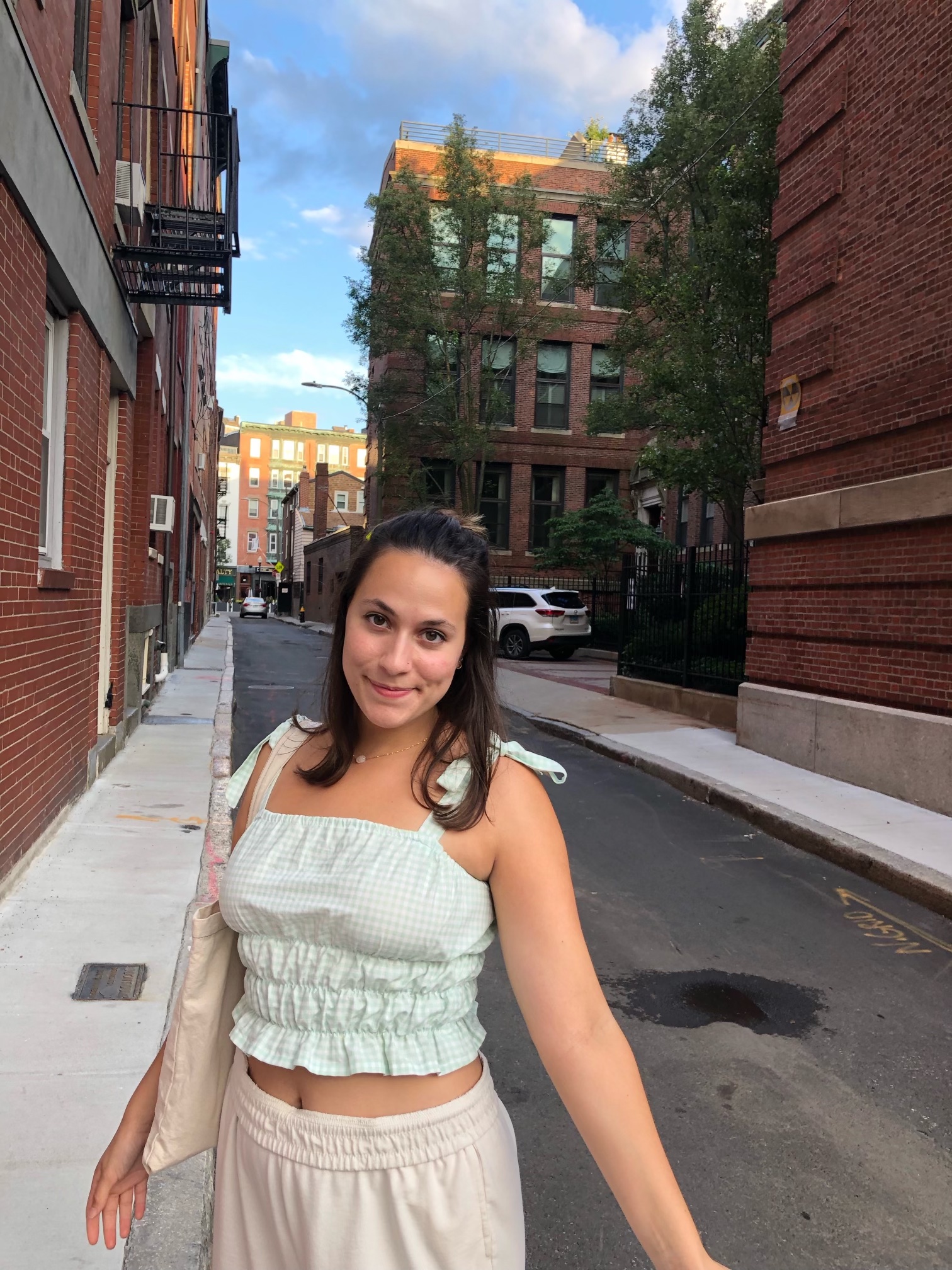 With an engaged online following, complete clothes-making Instagram and TikTok account (formerly named prochoicebeatrix), and a vibrant life on campus, which includes dancing in showcases and writing one of the first senior theses in the newly established College of Education Studies, Roberts is as much a WesCeleb on- and offline. The Argus sat down with Roberts to chat about her major choice, dance on campus, and her love of sewing.

Beatrix Roberts: Everyone says this, but it’s probably because I’m just involved in a lot of different areas on campus, like dance and the fashion side of Wesleyan.

A: Speaking of academics, when I first met you, you were dead set on being a psychology major, and now you’re an Education Studies and American Studies (AMST) double major. What made you decide to pursue these?

BR: I came into Wesleyan telling everyone that I was going to double major in psychology and [neuroscience & behavior]. I’m so not a science person, and it’s nuts that I ever thought I could major in neuro. I started taking psychology classes and realized that I really was not a huge fan of them.

I was a dance major for a while, and I love the Dance Department so much, but with COVID-19 it became hard to take dance classes and I felt like I wasn’t really getting much out of dance classes.

A happy coincidence is that the Education major was created around that time. That’s a linked major, so I still had dance as my linked major with Education, but then my friend, Anna Marti ’22, said, “I’m going to link it with American Studies.” I started to look into the American Studies major and I was like, “This works super well with Ed Studies and is exactly what I want to do.”

A: You mentioned your thesis. Can you elaborate a bit about on what it’s about and what that process was like?

BR: I can’t believe it’s finished. I feel like it’s been such a weight on my shoulders for the past few months, but also in a good way. I honestly really enjoyed the process. I went into it not entirely sure what I wanted to write about, but knowing that I really wanted to work with [Associate Professor of the Practice in Education Studies] Amy Grillo, who is my advisor.

I had taken the class “Fugitive Perspectives on Education and Civil Society” and was thinking a lot about disability and special education and race in schools. I was conceptualizing disability in a way that I never had before. I thought I wanted to explore that for my thesis.

I wrote about a series of education reform policies from the 1980s until today, looking at them through a disability studies lens. It was definitely a tough process, but I’m super grateful for Amy.

I also had weekly thesis meetings with Ariana Baez ’22, Anna Marti, and David Lepelstat ’22, who were the best thesis-writing cohort and had such great wisdom and feedback.

A: What are you looking forward to doing now that it’s over?

BR: I want to spend as much time outside as I can. I feel like Wesleyan is its best and happiest when it’s sunny and warm outside. I love when everyone’s outside on Foss and on the steps of Olin and just soaking up the sun.

I’m really excited to sew again. I haven’t made any clothing in a really long time.

A: Could you talk a bit about your experience in dance at Wesleyan?

BR: I danced pretty seriously when I was in middle school, but then I took a break during all of high school and came back to it at Wesleyan. I knew that I wanted to start dancing again at Wesleyan. Dance can be pretty tough to jump back into after taking a break, because there is an expectation of continuity in dance and that you started at a young age and continue throughout your life. In more competitive dance spaces, that’s the norm. 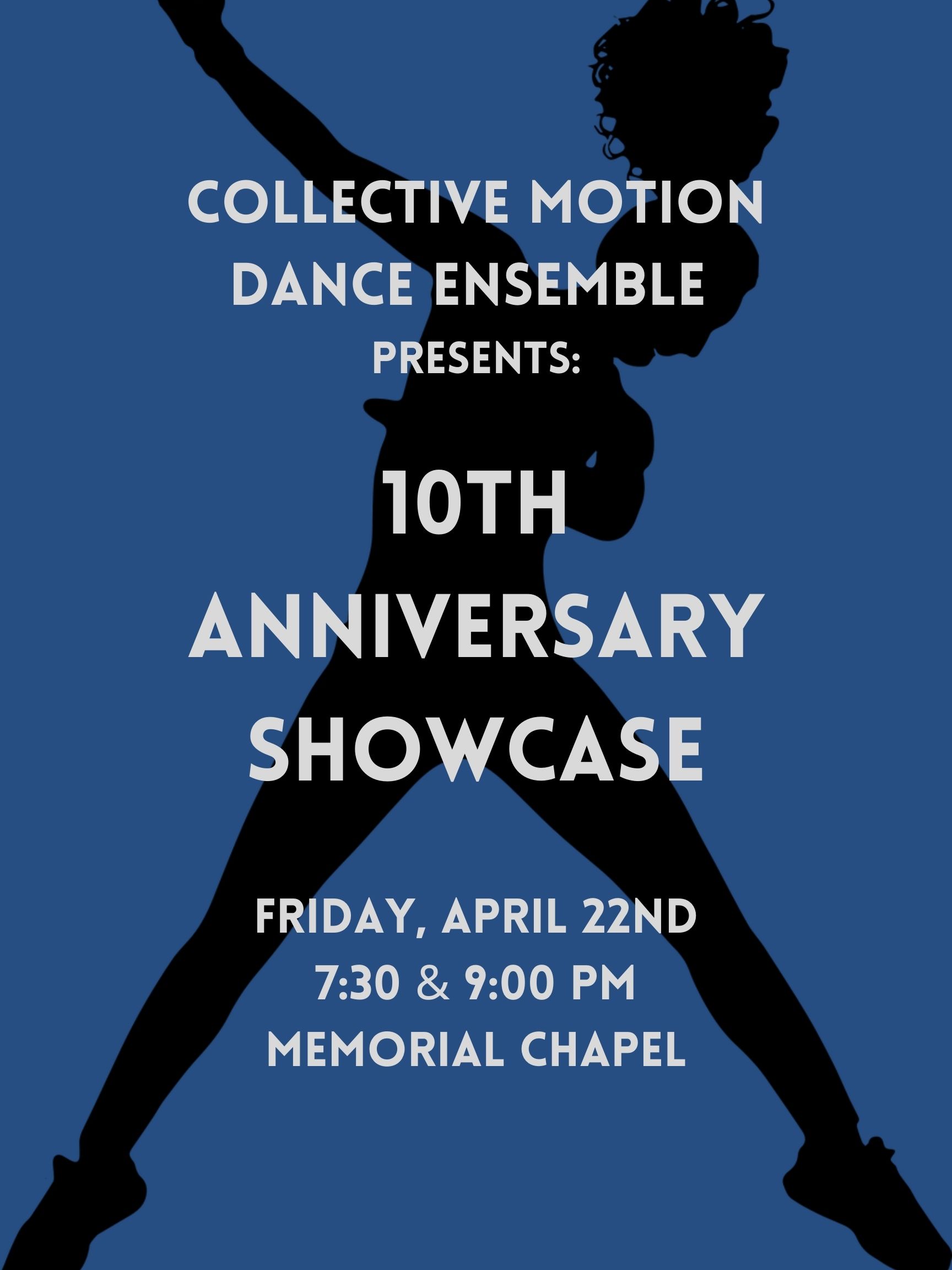 But I went to the dance showcase my freshman fall and saw Collective Motion (CoMo) perform and loved what they were doing. It turned out that they are one of the only non-audition dance groups on campus, where everyone is able to join regardless of their background or experience level.

It was the perfect place for me to jump back in because the people there were really serious about dancing and wanted to put on a really wonderful show, but it was a very low-pressure, low-stakes, non-judgmental environment of people from all different dance backgrounds.

I met some of my closest friends through CoMo, which I’m forever grateful for. I loved the mission and the idea that there should be a dance space on campus that’s open to everyone. Towards the end of my freshman year, I signed up to be on the board of directors of CoMo and have been doing that ever since. This past year, I’ve been the co-director along with Ava Nederlander ’22.

COVID-19 was rough for CoMo because we weren’t able to perform for a full year, and we lost a lot of our members, but I think we’ve come back pretty strong. This is a great opportunity for me to promo our 10th anniversary showcase. It’s going to be this Friday, April 22. There’s a 7:30 p.m. and a 9:00 p.m. show in the Memorial Chapel, no RSVP required. And I’m really excited and also pretty sad about it because it’s my last ever CoMo show.

I’ve also been involved in some Dance Department shows. I’ve been in dance performances choreographed by faculty and thesis performances. I was in Natasha Marder’s ’22 thesis this year. She’s also my housemate and best friend, and it was really wonderful to be part of that process.

A: One of the things you’re known for on this campus is being able to sew or alter things. What got you into that and being involved with sustainable fashion?

BR: My grandma taught me how to sew when I was little, and I was super into it for a while. During quarantine, I was bored out of my mind and dug up our old sewing machine and found this box of scrap fabric. I started sewing things out of old pillowcases, bedsheets, and whatever I could get my hands on because I wasn’t going out to the fabric store.

It was so cool to be able to make things and actually wear them. When I came back to campus, I was really excited to be able to alter people’s clothes. There’s something so fun about being able to fix something that is ripped or broken for someone.

I’d never sold any clothing before the Fray magazine pop-up shop last spring. It was a great feeling to walk around campus and see people wearing clothes that I had made. It inspired me to start making and selling more clothes. I’m actually going to sell stuff at the workshop Bazaar this Saturday.

A: You’ve done a lot of internships where you do social media for different organizations. Didn’t you have a viral TikTok?

BR: It’s true. During the summer of 2020, I interned for this organization called Jane’s Due Process, which is this incredible abortion fund in Texas. It helps minors access birth control and abortions, and specifically judicial bypasses, which is the process where you can get an abortion without parental consent as minor. I ran a TikTok account for them that went so viral that it broke our text hotline, which was kind of insane, but also really cool.

They were like, “We can’t handle this kind of craziness right now.” So I created my own TikTok account where I started posting information about birth control and abortions. I got a lot of traction with that. People were commenting things like, “This information is life-saving. I’m able to get birth control without telling my parents.” It’s crazy because all of that information is out there, but it’s super hard to access.

I had another internship with Texas Equal Access Fund, which is another abortion fund in Texas. I also made TikToks for them. TikTok can really be a really powerful organizing tool, and it also gave me a great excuse to spend time scrolling on TikTok for work.

I’m still a text hotline volunteer with Jane’s Due Process. Every week for a few hours, I log on to their text hotline and answer questions about birth control and abortions.

A: You’ve changed a lot since freshman year—is there any advice that you would give to your freshman self?

BR: I think that the biggest thing I’ve learned is how to say no to things and how to not overload myself with commitments. I’ve realized that if I sign up for every single thing, I will not be able to give my all to all of those things and I will get overwhelmed. And I have learned to think about the things that are important to me and being able to fully commit to them. My advice to my freshman self is to enjoy the things you are defining and set boundaries.

BR: I think I want to be a teacher for a little while in my life. I don’t know if it’s something I want to do forever, but maybe it is. I need to go to grad school first, but I also need to take a break to not be a student for a little while. Maybe I’ll open an Etsy shop. That would be the dream. Sell some handmade clothing.