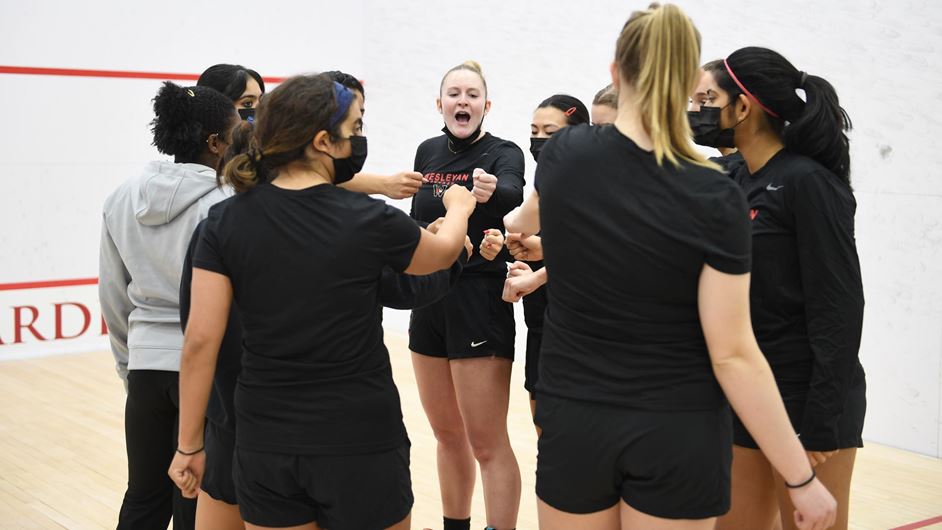 The Argus last profiled Wesleyan’s women’s squash team just before winter break after the team enjoyed an impressive victory over Connecticut College. The season had gotten off to a rocky start. After opening with an impressive 8–1 victory over Mount Holyoke College, the team entered a three-game losing streak within the span of one weekend, suffering a 3–6 loss to Saint Lawrence University, a 0–9 defeat by Hamilton College, and a 1–8 loss to Hobart and William Smith Colleges. In spite of its stint of bad luck, the team recovered to enjoy its aforementioned victory over Conn. College, dominating with an 8–1 win at home. No matter the team’s record, the players were grateful to simply have a season after the cancellation of last year’s campaign.

One thing that was apparent in our last profile was the team’s eagerness to improve. Players and coaches alike were looking forward to winter training, and when the team came out of winter break swinging, that eagerness paid off. In its first game of 2022, the team defeated Haverford College 8–1. Later that day, the team emerged victorious over Chatham University in a 7–2 victory. Then came a shutout of Conn. College, which marked a change in the team’s momentum as they went from losing three games in a row to enjoying a four-game winning streak.

Afterwards, the Cardinals fell victim to some more bad luck. First came a 1–8 home loss to Bowdoin College. Then COVID-19 reared its ugly head, and scheduled matchups with Williams College and Amherst College were canceled. Thankfully, the season soon resumed, and the team defeated Georgetown University 6–3 before losing to Brown University 1–8. After one more loss, which came at the hand of Hamilton in a narrow 4–5 defeat, the Red and Black once again shut out Conn College before earning a close 5–4 victory over Colby College. Now all that’s left before the end of the season is a matchup against Franklin and Marshall College and, for select players, Nationals.

When asked to share his favorite part of the season, assistant coach Guy Davidson ’16 expressed pride in the growth the team has gone through this season.

“The biggest highlight is how much our team improved from day one to today,” Davidson said. “They are almost unrecognizable on court, and have been competitive with teams that we would not have had a shot against earlier in the season.”

Davidson also pointed to the team’s perseverance as being crucial to their continued success.

“We lost 9–0 to Hamilton at the beginning of the season, and couldn’t have come any closer to beating them at NESCACs when we lost 5–4,” Davidson said.

For player Annie Roach ’22, the highlight of the season was the team’s 5–4 win over Colby.

“It was really satisfying to seal a close match and observe how much everyone’s game has improved since the start of the season,” Roach said. “We played smart and ran for every ball, and it really paid off.”

Roach praised how quickly the team was able to get itself into playing shape once again.

“[This year] was all about adjusting to a new team and getting back into squash after not being able to compete last year. It was really awesome to be able to practice and compete after so much time off,” Roach said.

When asked about what challenges the team has faced, Davidson cited the difficulties posed by COVID-19.

“We’ve had several cancellations, and even when we have played we have dealt with injuries and/or COVID cases which have prevented us from competing consistently with our full ladder,” Davidson said.

Roach seconded Davidson’s thoughts about the effects of the ongoing pandemic on the team’s season.

“We’ve had to deal with a slew of COVID cases throughout the season, which has made certain parts feel very fragmented,” Roach said. “We’ve played a lot of matches where people have been out sick, so we’ve had to adjust and make do with the circumstances.”

Looking forward, Davidson is excited about the potential for growth with next year’s team.

“Next year’s team will be very, very young and has a lot of potential, and it’s exciting to work with a team that has a lot of room for growth,” Davidson said.

However, he also expressed regret over the impending departure of the senior class. One of them is Roach, who hopes to finish her career on a high note at Nationals.

“All five of us seniors have worked so hard, and though the ending is bittersweet, it feels good knowing that I’m ending my career with one of the closest-knit teams we’ve had,” Roach said. “I know all the underclassmen are going to be great leaders next year!”

Annie Roach is a former Features Editor for The Argus.