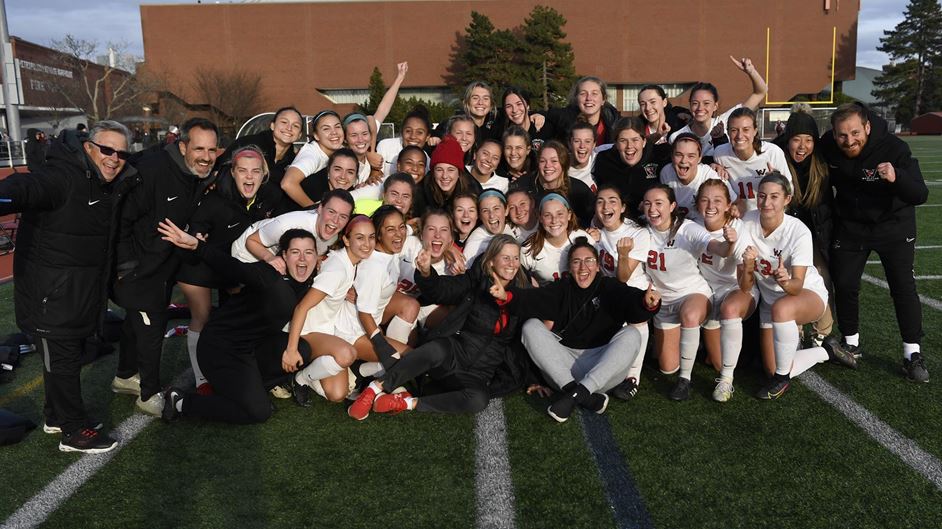 For the first time in program history, the women’s soccer team has advanced to the Final Four after beating Johns Hopkins in the Sweet 16 and Massachusetts Institute of Technology (MIT) in the Elite Eight on Nov. 20 and 21, respectively.

Against second-ranked Johns Hopkins in the Sweet 16, Wesleyan was able to pull out a 2–1 victory. The game was a close one: The teams traded goals in the first half within minutes of another, with Emily Ribatt ’21 MA ’22 scoring in the 20th minute to put the Cards up 1–0 before the Blue Jays tied it up just five minutes later. The game remained tied at one for the rest of the first half. In the second half, Wesleyan pulled ahead for good when Remi Feurman ’22 scored her second game-winning goal of the tournament in the 48th minute. The Red and Black then were able to hang on for the 2–1 victory, as the defense shut down the Johns Hopkins offense for the rest of the game. The Cardinals and Blue Jays tied in shots with 11, and in goal, Sarah Hammond ’22 made five saves in the victory.

After defeating Hopkins, the Cardinals advanced to play eighth-ranked MIT in the Elite Eight, where they were able to top the Engineers 2–1 in overtime to advance to the Final Four. The Red and Black scored first, just as they have done in every game in the tournament to this point. Grace Devanny ’23 notched the opening goal for the Red and Black, scoring just over two minutes in the game to give the Cards the early advantage. However, MIT tied it up at one in the 26th minute, leaving the score knotted at the half. Coming back from the break, neither team found a way to earn the tie-breaking goal. The Cards defense and Hammond withstood ten shots by the Engineers to keep the game tied at one at the end of regulation. As a result, the game went into overtime, where Devanny scored just thirty-five seconds in to send the 14th-ranked Cards to the Final Four.  On the stat sheet, Wesleyan was outshot 15–5, and Hammond made seven key saves in the victory.

Coach Eva Meredith said she is ecstatic to be heading to the Final Four for the first time in team history.

“It is an amazing feeling and this team is so deserving after all the hard work they have put in, especially over the past few years,” Meredith wrote in a message to The Argus. “It’s true that hard work and dedication pay off.”

In particular, Meredith highlighted the team’s resilience as being crucial to their success in a variety of challenging situations this season.

“They are the most resilient group I have ever coached,” Meredith wrote. “They bounce back from adversity and keep fighting until the end in every game. They now fully believe they can beat anyone and even to come back and win from being a goal down.”

Devanny agreed with Meredith, highlighting the team’s confidence and belief as being key in the game against MIT.

“MIT is a very good team,” Devanny wrote in a message to The Argus. “So I think we knew we needed to take advantage of our chances near goal and to continue to play to our strengths as a team.”

Next up, the Cards will take on The College of New Jersey in the semifinals on Friday, Dec. 3, in Greensboro, N.C. The Cards have their work cut out for them; they will need to beat the Lions, the number-one ranked team in the country, for the right to move on to the National Championship Game against either Loras College or Christopher Newport University.

Devanny says the key to victory is to remain focused on the task at hand.

“I think we just need to keep each other motivated,” Devanny wrote. “Every team that is left in the tournament is talented, so it will come down to what team wants it more and who can take advantage of the chances they get. We are all just super excited to get down to NC and have fun.”

Meredith echoed these sentiments, adding that the team will need to approach their upcoming game with confidence.

“The key to us being successful in the Final Four is continuing to play our game and trust that we belong here,” Meredith said. “We have already won by having this amazing season but I know this group wants more. Not every athlete or coach gets to experience a Final Four in their careers, so we are going to give it our all and enjoy the journey.”