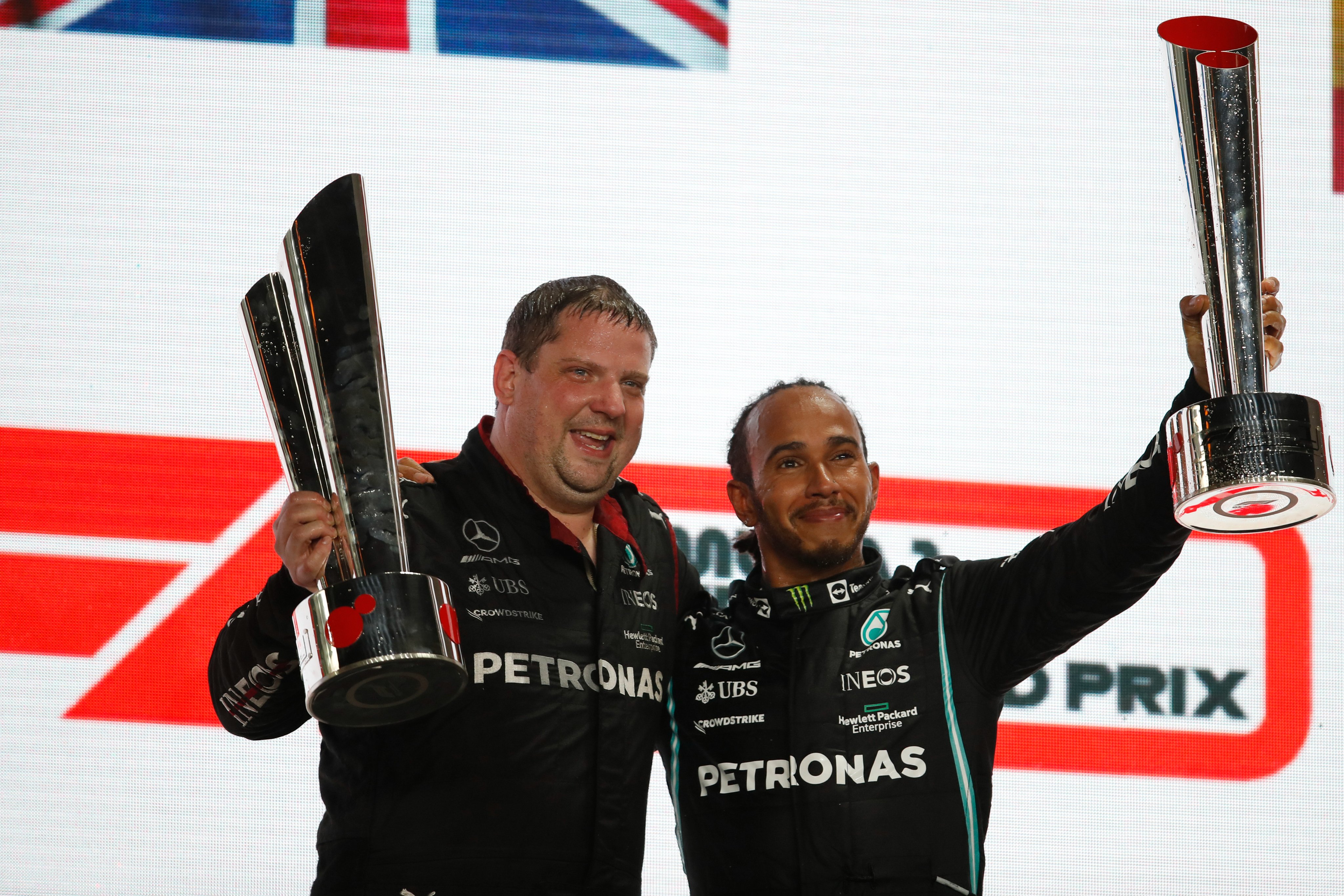 The end of the 2021 Formula One (F1) season is drawing ever closer, with just two races left in the calendar following the conclusion of the Qatar Grand Prix (GP). The Qatar GP, which took place from Friday, Nov. 19 to Sunday, Nov. 21, saw the F1 grid travel to the Losail International Circuit in Qatar for the first time, with the night race meaning that the qualifying session and the race itself would happen under the track’s floodlights.

Though the weekend was centered on the title battle between Lewis Hamilton and Max Verstappen, Hamilton made headlines before racing even got underway with his choice to use a helmet design featuring the LGBTQ+ flag in a statement against the ongoing human rights violations in Qatar. Hamilton would continue to hold the limelight throughout the weekend with his dominating performances in Saturday’s qualifying session and Sunday’s race, bringing him even closer to Verstappen in the Drivers’ Championship standings after his win in São Paulo.

The Free Practice (FP) sessions kicked off with high track temperatures in FP1 as the grid took to the Losail circuit for the first time. Verstappen set the fastest time by over four-tenths from Pierre Gasly, who continued his good form this season to finish in P2 with Alpha Tauri teammate Yuki Tsunoda in P5. The two Mercedes drivers finished in P3 and P4, with Valterri Bottas ahead of Hamilton after the British driver faced power unit issues and eventually had to retire his car to the garage. The two Ferraris of Carlos Sainz and Charles Leclerc finished in P6 and P7, while Sergio Perez took P8 ahead of Esteban Ocon and Lando Norris in P8 and P9. Perez’s time, which was over a second slower than Verstappen’s, was not a promising sign for the Red Bull driver, who would have wanted to be closer to his teammate.

FP2, which would be the most representative of qualifying and race conditions as it was the only session to happen in the evening, saw Mercedes take the fastest time with Bottas in P1. Gasly finished the session in P2, with Verstappen and Hamilton separated by less than a tenth in P3 and P4. Aston Martin had a particularly good session, with Lance Stroll finishing in P6 and Sebastian Vettel taking P9, though Perez would have been more disappointed after once again finishing below Verstappen in P8. The Ferraris did not go as well in FP2 as in FP1, finishing the session with Sainz in P10 and Leclerc in P13. Alpine, on the other hand, would not have been too disappointed by Ocon and Fernando Alonso finishing in P11 and P12 respectively.

In the final practice session, Bottas and Hamilton traded fastest times until Bottas eventually finished in P1 by just seven hundredths ahead of his teammate. Verstappen took the chequered flag in P3, with Gasly staying in the top five and finishing P4 ahead of Perez in P5. The two Ferraris were split by Fernando Alonso and Esteban Ocon in P7 and P8 after another good showing for Alpine, with Tsunoda rounding out the top 10 to conclude FP3.

With qualifying underway, Hamilton went fastest in all sectors in his first timed lap of Q1, with Verstappen slotting in behind him. It was then Bottas who was the quickest by just 0.003 seconds until Verstappen became the first driver to finish with a sub-1:22 lap time. However, Hamilton went fastest overall with his final timed lap, finishing Q1 in P1. As expected, the two Alfa Romeos and Haas cars were knocked out in Q1 along with Nicholas Latifi, though Latifi’s Williams teammate George Russell managed to sneak through to Q2 in P15. Both Aston Martins also made it through to Q2 in P9 and P10, continuing their good pace from the FP sessions.

As the second portion of qualifying began, both the Alpha Tauris and Alpines showed a strong pace and eventually managed to get both of their cars to the final part of qualifying. Vettel made it through to Q3 in P8, getting to the final portion of qualifying for the first time in eight races, while teammate Stroll was knocked out. Surprises of Q2 included both Leclerc and Daniel Ricciardo being knocked out in the bottom five, while their teammates both made it through. The most shocking upset of Q2 was Perez failing to make it to Q3 on the soft tires. It was a clear moment of disappointment for the Mexican driver, while his teammate finished Q2 in P3 behind Gasly in P2 and ahead of Bottas in P4.

As Q3 arrived, Hamilton was clearly the fastest of the ten drivers remaining in qualifying after their first timed runs. Hamilton continued to improve on his time after going out early for his second timed lap to set the only time below 1:20, which was the quickest lap by over half a second. As the other drivers came out for their final timed runs, Gasly suddenly found himself facing a puncture that brought out yellow flags for the rest of the drivers behind him, ruining both Verstappen and Bottas’ chances of improving on their times.

Though the grid seemed to be set with Hamilton on pole and Verstappen and Bottas lining up behind him in P2 and P3, the stewards announced after the end of qualifying that Verstappen would take a five-place grid penalty for ignoring double waved yellow flags, while Bottas would receive a three-place grid penalty for ignoring single waved yellow flags, putting Bottas in P6 and Verstappen in P7 for the race. The penalties meant that Gasly would actually start on the front row beside Hamilton in P2, while Alonso would move up to P3 for the start of the race.

As the lights went out on Sunday evening for the 57-lap race, Hamilton made a solid start and safely pulled away from Gasly and Alonso behind, while Verstappen made an even better get away from the grid and made his way up to P4.

The next few overtakes were simple for Verstappen, with Gasly going wide into the final corner just before the start of Lap 4 and letting Verstappen through to P3. The Red Bull driver then made his way into second place at the start of Lap 5 as he got past Alonso to P2.

The two teammates of the championship leaders found themselves in very different places after the start of the race, with Perez managing to make up multiple places but Bottas finding it difficult to pass the cars ahead of him in the midfield. Hamilton, on the other hand, was ahead of Verstappen by over nine seconds and ahead of the rest of the field by over 30 seconds by Lap 17. Verstappen came into the pits at the end of Lap 17 for his first stop, leading to Hamilton being called in on the next lap to cover off Verstappen’s undercut. Hamilton came out easily ahead of Red Bull, with both of them on hard tires.

Perez pitted on Lap 19, coming out back in the midfield behind Vettel in P12, while the Mercedes pit wall decided that Bottas would go long on his original first set of medium tires. However, as Bottas continued to make progress through the field, he suddenly found himself facing a puncture in his front-left tire on Lap 33. After having to painfully make his way around the track with the punctured tire until he could enter the pit lane, he rejoined the field in P14, a very disappointing blow to the overtaking efforts he had made up until then.

Bottas’ puncture raised concerns for the other teams of how long the hard tires might last for the cars on a one stop strategy. This worry may have pushed Red Bull’s decision to pull both Verstappen and Perez in for a second stop on Lap 41, with Lewis pitting on the very next lap. Perez’s second pit stop brought him out once again into the midfield, leaving him with more work to do before the end of the race. He faced a particularly strong fight from Ocon but ultimately got past him to chase after Alonso. The Alpine driver had managed to stay in P3 after being passed by Verstappen and would not let Perez by without a fight as he hoped to finish in the final podium place.

The teams’ concerns about tire wear began to be realized when Bottas retired on Lap 48 from puncture damage. Lap 49 saw Norris called to the box by the McLaren pit wall from P4 when the team realized he was facing a front-left tire failure; while unfortunately for Russell, his front-left tire picked up a puncture that he had to grapple with while trying to finish Lap 49 to come into the pits for a tire change. The very next lap saw Russell’s Williams teammate facing the same issue, with Latifi also finding a front-left puncture on lap 50.

Alonso, who was hoping to get to the end of the race on a one-stop strategy after having pitted on Lap 23, would have been very nervous after seeing those punctures. However, Latifi’s puncture, which saw him pull over to the side of the track to retire the car, brought out a virtual safety car (VSC) to allow the marshals to safely get Latifi’s car away from the circuit.

Verstappen was able to pit under the VSC for fresh tires without losing track position on Lap 55, allowing him to seal the fastest lap and the resulting additional point on the final lap of the race. The VSC also saved Alonso from concerns about tire wear, allowing him to safely cross the line in P3 to score his first podium since the 2014 Hungarian Grand Prix. Alpine’s excellent showing this weekend was rounded out by Esteban Ocon’s P5 finish, helping the team to cement its current fifth-place standing in the Constructors’ Championship.

Behind Alonso, Perez came home in P4 for Red Bull, while Stroll finished in a strong P6 and Vettel in P10 to conclude a decent race weekend for Aston Martin. The two Ferraris finished the race in P7 and P8 ahead of Norris in P9, helping to strengthen Ferrri’s third place in the Constructors’ battle ahead of McLaren.

The Jeddah GP, which will take place from Friday, Dec. 3 to Sunday, Dec. 5, will be another first-time race for F1. Hamilton now remains eight points behind Verstappen in the Drivers’ Championship standings and will surely be aiming to reduce that gap even further before the season-closing race in Abu Dhabi. With just two races left in the season, Verstappen has the chance to secure the championship in Jeddah if he is able to score 18 more points than Hamilton. However, given Hamilton’s recent surge in race pace and the momentum of his past two wins, it seems more likely that the title fight will remain too close to call until the final race in Abu Dhabi.

Mercedes also remain just five points ahead of Red Bull in the Constructors’ Championship, pointing to a close race between the two teams as Mercedes will try to recover from Bottas’ retirement in Qatar. The final two races of the season are sure to be tight, as Hamilton tries to carry over his momentum from the triple header and Verstappen attempts to stave off the Mercedes driver from getting any closer in the championship.