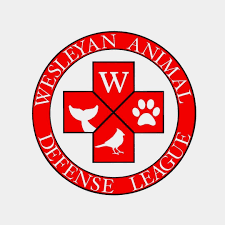 Created in the spring of 2021 as an animal advocacy group, the Wesleyan Animal Defense League (WADL) has an intentionally broad philosophy: The group aims to give students on campus the ability to engage in activism, education, volunteering, and fundraising efforts centered around animals.

“We just want people to have a way to get involved,” WADL co-founder Ethan Brill-Cass ’23 said. “We’re less interested in what your specific belief is about how animals should be treated and much more just about getting involved, especially in the community.”

WADL also creates a community for those who have a passion for helping and learning about animals.

“Everyone here loves animals,” co-founder Nina Hirai ’23 said. “I haven’t met a Wesleyan student who doesn’t like animals…. So why not tap into that?”

The group started out as an idea between Brill-Cass, Hirai, and their friends after they took a few animal studies classes at the University. They realized that, despite students’ affinity for animals, there were no animal-focused groups on campus.

Moreover, the WADL co-founders voiced dissatisfaction in the lack of a University Animal Studies minor or certificate. Currently, there is only an Animal Studies course cluster, which, according to Brill-Cass, does not have the same appeal as a major and often discourages students from pursuing their interest in animals.

“[There is] clearly an appetite to have a more formalized and continuous study of animals and animal classes here,” Brill-Cass said.

Aside from academics, WADL has found ways to contribute to local organizations. They currently work with Running for Rescues, a Connecticut-based nonprofit that raises funds for rescue shelters to help them pay outstanding veterinary bills. WADL’s first project in the spring of 2021 was organizing a photo shoot for Running for Rescue’s new clothing line.

“In fundraising, our goal is to use the talents of our club members and the talents of the greater Wesleyan campus, because this is like the most talented group of people in the world,” Brill-Cass said. ”The musicians and artists and everything are so astounding, that we want to do something good and utilize them and provide something for campus.”

Such fundraising projects have included art shows and raffles, as well as one of WADL’s most popular fundraisers: the Homemade Vegan Meals program. Through this monthly service, students can pre-order and enjoy vegan food, freshly made by WADL volunteers, for a suggested donation minimum of $5. This has been WADL’s main source of fundraising, with all proceeds going to aid animal shelters and groups in the Middletown area.

“I’m not vegan, but I care about animals and it seemed like an easy way to contribute to the cause while also getting something out of it for myself,” Abby Nicholson ’23 said. “The meals are a great deal, and it’s really nice to be able to [eat] healthy home-cooked food while I’m at college.”

Instead of directly donating the funds raised in the Homemade Vegan Meals program, WADL speaks with local veterinarian clinics to identify what specific products they need at the time. WADL then uses money raised to make purchases and donate items.

“We’re really, really focused on aiding communities with the aid they tell us they need, instead of us going in and assessing what they need and giving them money,” Hirai said.

WADL leaders emphasized that they want to act as a resource to University students and the Middletown community alike, so they bring the two together in many of their projects. The group is in the process of creating a WADL fund at a local veterinary clinic, which will act as a resource for low-income Middletown residents who cannot afford veterinary service.

Although COVID-19 impacted the club’s ability to contribute to the community in person, the group was able to pivot to meeting and working virtually. One of the remote projects they accomplished was organizing an online call between Girl Scouts troops and professionals in the animal studies field—including both University faculty and people in the community—to help the Girl Scouts earn their Animal Helper badge.

In the future, WADL wants to grow as a general campus forum where Wesleyan students who own pets can get help, whether it be offering tips or sharing pet food, without risking disciplinary action from the administration.

WADL is open to any and all who wish to participate, no matter how much time they are willing to contribute.

“We don’t need people to be at every meeting to make a difference,” Brill-Cass said.