The Rams, McCarthyism, and a Quarterback Controversy: Midseason NFL Fraud or Legit? 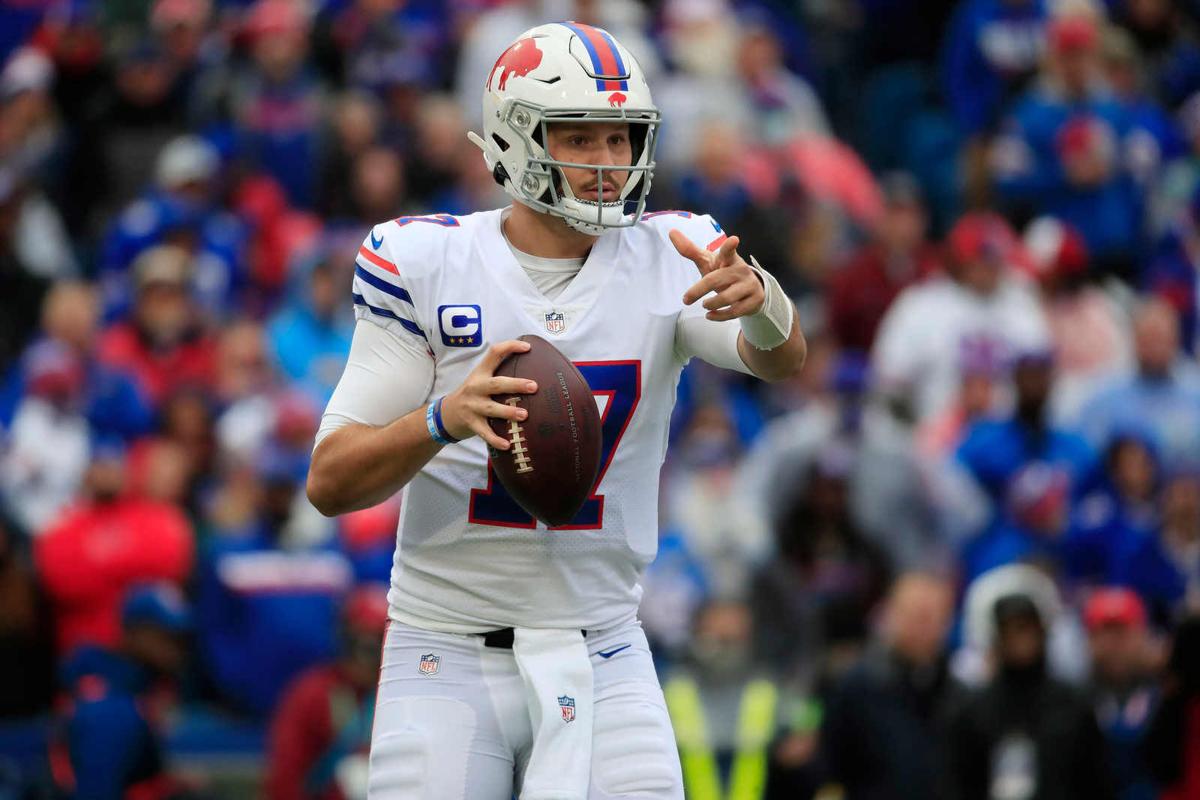 With Week 8 now nearly in the books, the halfway point, or the nearly halfway point with the Mickey Mouse 17-game cash grab completed, it’s time for everyone’s favorite back cover feature: NFL Fraud or Legit! We’ve crunched the numbers, run the algorithms, and even added a new category, “bad,” for teams that are recognizably awful. Without further ado, we present NFL Fraud or Legit!

To begin the American Football Conference’s (AFC) entry in this time-honored series, we’ll begin with the AFC East, where the Buffalo Bills (legit) comfortably lead the division by one and a half games. Star quarterback Josh Allen’s completion percentage (65.4) is slightly down, but his touchdown (17) and yardage (1972) numbers are right on track with his Pro Bowl season last year. The Bills are the most complete team in the AFC and should be favored to make it out of the conference. New England (legit?) is a confusing case. The Patriots dropped several winnable games at the start of the year, with the Week 1 loss against Miami looking especially egregious as time went on. However, it’s a credit to New England’s coaching and improved skill positions that an offense led by rookie Mac Jones was even able to stay competitive against Dallas and Tampa Bay, led by Dak Prescott and Tom Brady. Coming off a nice win against the Los Angeles Chargers, the Patriots are still squarely in the mix at 4–4. Miami (bad) has lost seven in a row, prompting coach Brian Flores to begin fielding questions about his job security. The New York Jets (bad), in predictable fashion, have somehow managed to make a poor season even more chaotic by igniting a quarterback controversy that may knock number two overall pick Zach Wilson out of his starting job.

In the AFC West, there may not be a single team we’re comfortable declaring as legit. The division-leading Raiders (fraud) are embroiled in controversy after former head coach Jon Gruden was fired for a series of racist, sexist, and homophobic emails uncovered from his time as a commentator at ESPN. No matter what Las Vegas’ record is, working with an interim head coach doesn’t inspire confidence, especially after the previous coach lost the respect of the locker room. The 4–4 Denver Broncos (fraud) can’t seriously be expected to compete for a lengthy playoff run while Drew Lock is on the payroll. Wins over the Giants, Jets, Jaguars, and Washington Football Team might give you four wins in the record book, but Argus Sports is skeptical. The Chargers (legit?) are probably closest to a favorite to win the division at this point. Their roster is incredibly talented, and Justin Herbert has built off his strong rookie season with a terrific start to sophomore year. Surprisingly, the team that looks best on paper, the Kansas City Chiefs (fraud), currently occupy the cellar of the division. When looking at each game individually, some of Kansas City’s losses seem justifiable, with close losses against the Chargers and Ravens. Stinkers like the Chiefs’ 27–3 loss to Tennessee, however, can’t be ignored. Anything short of a Super Bowl appearance is a disappointment for a Patrick Mahomes-led team, and this Chiefs squad doesn’t appear to have the defense to get them anywhere close.

The AFC North is led by the 5–2 Baltimore Ravens (legit), who, after another disappointing playoff run last year, are looking to finally punch a ticket to the Super Bowl under Lamar Jackson. A signature win over the rival Chiefs in Week 2 showed tremendous guts by the Ravens, and a high degree of confidence by coach John Harbaugh. However, the talk of the division in recent weeks has been the Cincinnati Bengals (legit?), who have been setting off offensive fireworks with the combination of second-year quarterback Joe Burrow and rookie receiver Ja’Marr Chase. At the time of the draft last year, the Bengals received a fair bit of criticism after indicating they may pass on tackle Penei Sewell to draft Chase instead; Burrow, who was recovering from a torn ACL in the prior season, needed all the protection he could get. After an up-and-down start to the year, however, Chase has emerged as the favorite for Offensive Rookie of the Year, exploding for 201 yards and a touchdown in a Week 7 win over Baltimore. While Pittsburgh (fraud) is still in the race, the corpse of Ben Rothlisberger is not a viable option in a 2021 playoff game. The onus is still on the 4–4 Browns (fraud) to prove that their much-publicized roster revamp in 2019 can translate into a deep playoff run.

The AFC South deserves the least amount of attention. The Titans (fraud) lead the AFC with a 6–2 record, but it’s hard to trust them moving forward without star running back Derrick Henry, who may miss most of the remaining season with a foot injury. The Colts (bad) and Texans (bad) aren’t factors this season. Curiously, the utter cesspool of incompetency that is the Jacksonville Jaguars franchise (disastrously bad) hasn’t received as much media attention lately. Number one pick Trevor Lawrence, possibly the best quarterback prospect since Andrew Luck, has looked far from being even the best rookie quarterback in his class. Much of the blame for Jacksonville’s season, however, should fall squarely on head coach Urban Meyer. Jacksonville may need to start looking for a new coach in the near future.

In order to best provide interesting content to our readership, we will dispense with the tortiously boring National Football Conference (NFC), East first. The Cowboys (legit) will surely be flying high following their victory against the Vikings, with their backup quarterback no less. Dallas boasts one of the strongest rosters in the league, and as long as they don’t fall victim to bad penalties and the second most dangerous McCarthyism of our time, they should be ready to make a statement in the playoffs. The Eagles (fraud) somehow managed to make a 44–6 blowout of the Lions look pedestrian. Jalen Hurts is neither elusive nor a great passer, and despite the brilliance of DeVonta Smith, this team is headed for mediocrity. The Washington Football Team (under congressional investigation) has a notable ceiling, as they went into the year deciding that the quarterback position was not particularly important. It is a shame to see Chase Young wasting his talents in such a pointless season. The Giants (horrific) have managed to play some of the most boring football week in and week out. The Daniel Jones–Joe Judge combination seems destined for the Arena Football League and Big Blue will surely be searching for a quarterback in the 2022 draft in which a good quarterback is non-existent.

The NFC North is similarly a one-team race. The Packers sit atop the division coming off an impressive victory against Arizona in a game in which they were missing their top three wide receivers to COVID-19 infections. Aaron Rodgers has silenced the doubters (including John) and looks poised for a deep playoff run. However, just because they haven’t proven they can, the Packers will be saddled with the unenviable designation of (fraud). The Vikings (fraud) have only themselves to blame, as they have lost on multiple last-second field goals as well as a Sunday night disaster against Cooper Rush, Inc. LLC. Justin Jefferson has crashed back to Earth following his transcendent rookie season and the Purple People Eaters will likely be watching the playoffs from the couch. The Bears (bad) defy logic each week and show the world that even in the face of complete incompetence, your job is secure if you succeeded once like 6 years ago. This is the Matt Nagy story. Sadly for the Bears, they are likely setting back the progress of rookie Justin Fields, who has made some dazzling plays but oftentimes looks lost, an understandable feeling when the offensive line acts like a friendly usher leading opposing defenses into the backfield. The Lions (pitiable) are a genuine sob story, and we are not just talking about their coach. Detroit could be the first team to go 0–17, in the process legitimizing Sean McVay’s thoughts on Jarred Goff. Hopefully, they can patch some of their holes in the offseason and make Thanksgiving afternoon competitive.

The NFC South has been fairly interesting all season. Despite being home to four of the most forgettable franchises in football, the division has been competitive all season. The Buccaneers (legit) boast a super team roster with the great one at the helm. Brady continues to dominate in his age-44 season and, while repeating in football is incredibly difficult, the Bucs certainly have the potential to do just that. The Saints (fun) are hard to dislike. Sean Payton is proving his coaching chops winning with not only washed up Jameis Winston but was-never-good-in-the-first-place Trevor Siemian. While the Saints don’t have the quarterback to make it far in the playoffs, they have been a fun story and have notched some impressive victories. The Panthers (fraud) have realized that it wasn’t just the Jets, but fittingly for Halloween, Sam Darnold is better suited for “Ghost Hunters.” The Falcons (fraud) are waiting until the end of the season to try in order to prevent themselves from getting a high draft pick while simultaneously missing the playoffs. At least Kyle Pitts is awesome.

The NFC West was supposed to be the most competitive division in football but so far it has been a bit of a disappointment. Starting with the good. The Rams (legit) have validated all of the preseason hype by getting off to a 7–1 start behind the brilliant play of Matt Stafford. They have blown out the Bucs, and won a gritty Jared Goff vs. Matt Stafford revenge game. The addition of Von Miller should bolster an already star-studded defense. The Cardinals (fraud) have flown too high and, after puffing out their feathers following a strong start, lost to a depleted Packers team. DeAndre Hopkins’ talents are being wasted and the injury to JJ Watt is a serious blow to an overrated season. The Seahawks (fraud) simply haven’t been the same team since losing Russel Wilson to injury, and broadway Geno Smith has failed to provide any salvation. Wilson should be expected back, but Pete Carroll and company may have dug too deep of a hole to claw out of. However, it is the Seahawks, so expect them to win the Super Bowl just to prove people wrong. The 49ers (fraud) have somehow defied my logic and moved from fun to fraud over the course of the season. Kyle Shanahan is unbearable to watch as a coach, and Brandon Aiyuk has tanked John’s fantasy team. Hopefully, Jimmy G can escape the Bay Area soon.