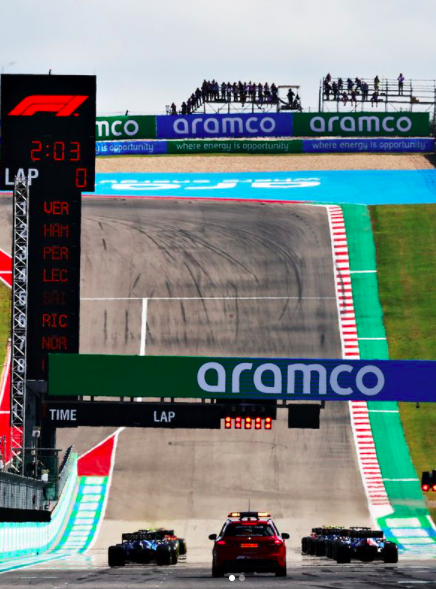 It was yet another thrilling weekend in the 2021 Formula One (F1) season as the teams returned to the United States for the 17th round of the close championship battle that has been the storyline of this season. The United States Grand Prix (GP), which was held from Friday, Oct. 22 to Sunday, Oct. 24 at the Circuit of the Americas (COTA) in Austin, Texas, welcomed F1 back after the cancellation of last year’s United States GP due to the pandemic.

Lewis Hamilton went into the weekend as the heavy favorite, having won six times at the United States GP (five of those wins at COTA), with his last victory in the United States in 2017. The results of the 2019 United States GP, where Hamilton finished second behind his teammate Valtteri Bottas, saw Hamilton securing his sixth world championship. This year’s race at COTA, however, would lead to a much different result in the Drivers’ Championship standings, as Max Verstappen managed to solidify his lead in the championship while Hamilton was left to continue chasing after the Red Bull driver as the grid moves to the next round of the 2021 championship.

The circuit remained hot and dry over all three Free Practice (FP) sessions, giving drivers and teams a hint of what to expect for the race on Sunday. FP1 saw the two Mercedes leading the pack, with Bottas taking the fastest time ahead of Hamilton in P2. This was standard form for the Brackley-based team in the United States, but Red Bull did not shy from the challenge.

Verstappen finished in P3 in both FP1 and FP3, while his teammate, Sergio Perez, looked revitalized after having faced scrutiny for much of this season for lagging behind Verstappen in his performance on track. Perez set the fastest times in both FP2 and FP3, putting on a strong performance that seemed to build on his recently discovered confidence in the Red Bull car.

Other bright spots from the FP sessions came from Ferrari, for whom Charles Leclerc and Carlos Sainz took P4 and P5 in FP1 respectively. Sainz finished FP3 with the second-fastest time behind Perez, which was a very encouraging result for Ferrari’s attempts to overtake McLaren in the Constructors’ Championship. However, Sainz’s former McLaren teammate, Lando Norris, also displayed speed on track as he finished P2 in FP2 and P4 in FP3.

Sadly for the F1 grid’s only American team, Haas, their two rookie drivers didn’t see much success in the FP sessions. This was to be expected from the slowest car on the grid, though Mick Schumacher continued to outperform his teammate Nikita Mazepin, finishing ahead of him in all three sessions.

As Saturday afternoon rolled around, the grid prepared for a busy qualifying session that would begin with the championship leaders making it through easily to Q2. Leclerc set the fastest time in Q1, followed by the two Red Bulls and then the two McLarens. The biggest disappointment would have been for Aston Martin, which saw Lance Stroll knocked out in P16.

Verstappen set the fastest time in the second portion of qualifying, with Hamilton three tenths behind him. McLaren’s Daniel Ricciardo faced a close call while trying to make it through to Q3. His fastest time was just on the edge of the elimination zone, but with both Alpines and the Aston Martin of Sebastian Vettel unable to improve enough to avoid being knocked out of qualifying, Ricciardo made it through to the final part of qualifying, along with teammate Norris. Both AlphaTauri cars also managed to reach Q3, continuing Tsunoda’s run of good form over the past few races.

As the clock began ticking for the final part of qualifying, all eyes were on Hamilton and Verstappen to see who would come out on top in their battle for pole. Bottas and Perez managed to stay in the fight for a bit, with Perez taking provisional pole until Verstappen and Hamilton both managed to best his time. It was ultimately Verstappen who ended up on pole as he took the chequered flag over two tenths ahead of Hamilton, meaning that the championship leaders locked out the front row of the grid for the seventh time this season. Perez maintained his good form from the FP sessions to end qualifying in P3, with Bottas setting the fourth-fastest time.

However, Mercedes’ announcement that Bottas would be replacing his Internal Combustion Engine would see him dropped to P9 for the race. Vettel, Fernando Alonso, and George Russell also all announced that they would be taking engine penalties for new Power Unit components, sending them to the back of the final grid for the race to start in P18, P19, and P20 respectively.

The results of qualifying were also set to intensify the midfield battle between McLaren and Ferrari that has been building all season, as the two Ferrari cars finished Q3 in P5 and P6 with the two McLaren drivers right behind them in P7 and P8. Gasly and Tsunoda rounded out the final positions in the top ten.

Even before the 56-lap race finally got underway, expectations were building throughout the paddock and the crowd of an estimated 140,000 people arrived for a dramatic start to the race for the two championship leaders. As the lights finally went out and the drivers pulled away from their starting spots up the hill towards Turn 1, Hamilton made a nearly perfect getaway and pulled up level to his championship rival.

Though Verstappen fought back, pushing Hamilton so far left that the Mercedes driver crossed over the pit exit line, the lead switched hands as Hamilton took the inside line into Turn 1 and pushed Verstappen wide through the exit of the first turn. Red Bull was very lucky to have Perez just behind in P3, with Verstappen’s teammate allowing him to remain in P2 instead of challenging him.

In the midfield, Sainz, Ricciardo, and Norris also found themselves caught in a close battle on the first lap as the Ferrari faced pressure from both McLarens behind. The three drivers exchanged places multiple times over the first lap, with Ricciardo eventually overtaking Sainz for P6.

With Verstappen having lost position to Hamilton on track, Red Bull decided to go with the undercut strategy, which has proven to be very powerful at COTA in the past, and pitted Verstappen for hard tyres on Lap 10 before Mercedes could bring Hamilton in. With Verstappen on a fresh set of hard compound tyres, Hamilton’s later pit stop at the end of Lap 13 meant that he conceded the lead of the race to his rival. Mercedes would have to rely on Hamilton’s abilities on track to close the gap with Verstappen and overtake him once again.

As the championship battle raged at the front of the field, Alpha Tauri’s Pierre Gasly became the first driver to retire from the race on Lap 14 with suspension issues. Meanwhile, Bottas found it difficult to make his way through the field from P9, getting stuck behind Tsunoda after coming in for his first pit stop before finally getting past on Lap 20.

All the teams knew that this GP would be a two-stop race due to the high temperatures and the heat of the track itself, leading all eyes to focus on the second set of pit stops. Once again, Red Bull brought Verstappen in earlier than Hamilton for his second stop on Lap 29, putting him momentarily in P2. The order would once again switch around when Hamilton finally came in for his second stop for a new set of hard tyres on Lap 37. Mercedes’ late stop meant that Hamilton would have tyres that would be eight laps fresher than Verstappen’s by the end of the race, but also put the pressure on Hamilton to catch and pass Verstappen with just 19 laps left in the race.

Lap by lap, Hamilton cut down the gap between the two cars, taking the additional point for the fastest lap of the race in the process on Lap 41. He remained tantalizingly close to the Drag Reduction System (DRS) range of one second as the race neared its final five laps, seemingly losing his chances of retaking the lead.

However, as Verstappen started Lap 55, Hamilton was just over a second behind the Red Bull driver and may have been able to get even closer had the two not caught up to the Haas of Mick Schumacher. As both leaders tried to lap the Haas car for the second time, they found it difficult to pass Schumacher, with Verstappen complaining over the radio, but lapping the Haas also gave Verstappen the advantage of DRS down the main straight. The opening of his rear wing allowed him to stay ahead of Hamilton into the first sector of the final lap, and he managed to keep it that way all the way over the 3.4 mile circuit.

The Red Bull pit wall likely breathed a sigh of relief as Verstappen took the chequered flag to win the United States GP for the first time and doubled his advantage in the Drivers’ Championship over Hamilton. Despite his best efforts, Hamilton eventually crossed the line 1.3 seconds behind Verstappen, but the two had clearly shown that they were a level above the rest of the grid during this particular race. The two finished over 40 seconds ahead of Perez, who came home in third to make it another double podium weekend for Red Bull after their P2 and P3 finish at the Turkish GP.

For the other teams, the race also remained dramatic until the end as Vettel made his way past Giovinazzi into P11 and then was aided by a spin from Raikonnen to finish in the final points position for Aston Martin. Leclerc finished in a very strong P4 for the Ferrari, demonstrating the improvements the team has made from their performances last year.

The top seven finishes for both Ferrari cars meant that McLaren’s lead over Ferrari in the Constructors’ Championship shrank to just three and a half points, with Sainz coming home in P7 ahead of his former teammate Norris in P8. Ricciardo finished ahead of his teammate in P5, showing a continuation of the resurgence of form that he found in Monza. On the other hand, it was a disappointing weekend for Alpine as both of their cars eventually retired, with Alonso having rear wing issues and Ocon facing a mechanical problem.

The biggest takeaway from the weekend was that Verstappen’s six-point lead over Hamilton after the Turkish GP was ultimately extended into a 12-point advantage, which will surely be a disappointment for the British driver after his perfectly timed start at the beginning of the race. With just five races left in the season, the results of this year’s United States GP have set the stage for even more tension as the grid moves to Mexico City for the Mexico City Grand Prix, which will take place from Friday, Nov. 5 to Sunday, Nov. 7.