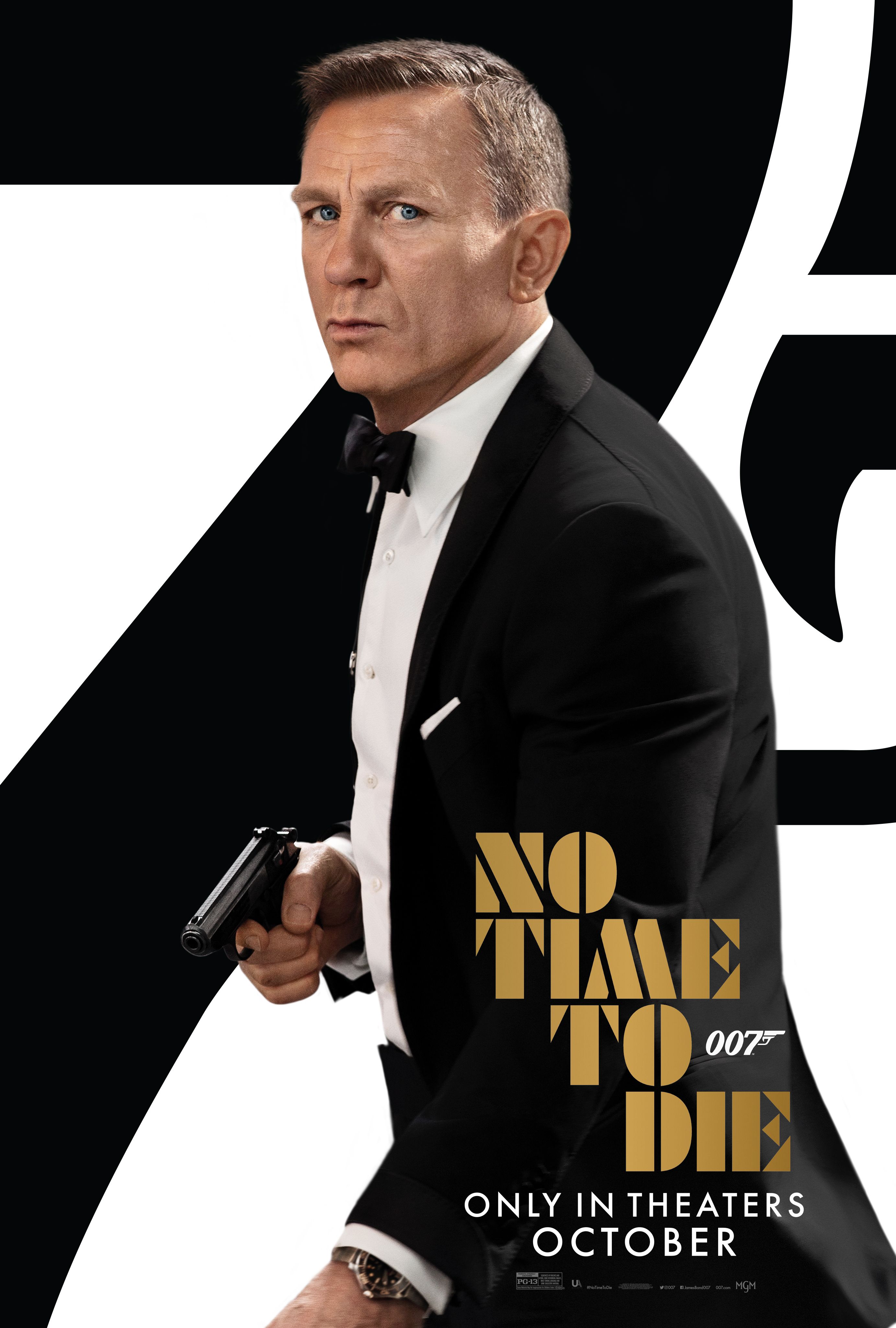 This article contains spoilers for “No Time to Die.”

A 15-year era has finally come to an end with the release of “No Time to Die,” the final movie of Daniel Craig’s tenure as James Bond. Directed by Cary Joji Fukunaga, the 163-minute movie is the longest installment of Craig’s Bond films and arrives after a year-and-a-half-long wait of repeated pandemic-related postponements from the movie’s original release date of April 2020.

I’ve always felt that Craig’s Bond films have consistently switched back and forth from great to questionable quality: “Casino Royale” (2006), amazing; “Quantum of Solace” (2008), a tragic drop in quality; “Skyfall” (2012), talented, brilliant, incredible, amazing, show-stopping, spectacular, never the same, totally unique, completely not ever been done before; “Spectre” (2015), a disappointing follow up from director Sam Mendes, who also directed “Skyfall.”

My greatest hope for “No Time to Die” was that it would follow this pattern, allowing Craig to say a graceful farewell to the role he has played with talent and dedication for over a decade and a half. Luckily, Fukunaga’s film is better than its predecessor, “Spectre,” and despite some questionable plot choices, the movie is ultimately a solid finale for Craig’s tenure as 007.

“No Time to Die” begins with Bond living his best life in his version of retirement as he vacations around Europe with Dr. Madeleine Swan (Léa Seydoux), whom he romanced at the very end of “Spectre.” Their seemingly happy relationship, however, is torn apart when Bond visits the grave of Vesper Lynd (his late love interest from “Casino Royale”) and is met with a bomb, reviving his ever-present suspicions of Madeleine’s betrayal as he leaves her on a train and disappears alone. Five years later, his return to MI6 is sparked by CIA agent Felix Leiter (Jeffrey Wright), who returns from “Casino Royale” and “Quantum of Solace” to ask Bond for help in tracking down the scientist Valdo Obruchev (David Dencik), who has created a lethal bioweapon. After meeting Nomi (Lashana Lynch), the MI6 agent who has replaced Bond as 007, Bond eventually decides to help Leiter and finds himself back within the grasp of MI6.

This plot generally makes sense, at least for a typical spy movie. We understand what drives Bond to return to working with MI6, and the journey back to London, during which Bond gets a wonderful fight scene with CIA agent Paloma (Ana de Armas) and has to watch the death of Leiter, is exciting enough to fill the first third of the movie.

The rest of the plot is driven by Bond and his team at MI6 working to stop the villain, Lyutsifer Safin (Rami Malek), from releasing the bioweapon upon the entire world and killing millions. Interspersed within that overarching story is the fractured relationship between Bond and Madeleine, which is built back up over the course of the movie after Bond discovers that Madeleine has a daughter who just happens to have eyes the exact same bright blue as his.

Fukunaga attempts to explain the connection between Madeleine and Bond’s newest enemy within the opening minutes of the movie, which flashback to Madeleine’s childhood as she witnesses her mother being murdered by Safin and is rescued by him when she tries to escape and falls into the ice. There’s nothing particularly wrong with Seydoux and Malek’s performances; in fact, they do a great job with the lines they are given, but the core problem with this movie comes from the fact that none of its story is very compelling.

In choosing to build off of the story left behind by director Sam Mendes with “Spectre,” “No Time to Die” struggles in the same areas as that film, especially with the romance between Bond and Madeleine. Their relationship has felt forced for me since “Spectre”—whether it’s the age difference or just the absolute lack of chemistry between their characters, I don’t know—and it, unfortunately, does not work any better in this final installment.

Malek, who is a very capable actor, also doesn’t get much screen time to develop as a villain, leaving him in the lower end of Craig’s Bond villains. This is more or less understandable given the standard he attempted to meet: for me, the standout villains from Craig’s era of Bond movies have been Le Chiffre, played by the one and only Mads Mikkelsen in “Casino Royale,” and Raoul Silva, played hauntingly by Javier Bardem in “Skyfall.” In “No Time to Die,” Safin suffers from the same issues as Christoph Waltz’s depiction of Ernst Stavro Blofeld in “Spectre” in that neither have fascinating reasons for being villains, which is tragic given the quality of both of these actors.

On the other hand, while the story may not be very sensible, the greatest strengths of “No Time to Die” lie in how it takes care of the characters that audiences have come to recognize as standard figures of a Craig Bond movie, along with the new characters it introduces. Fukunaga, who was joined by Robert Wade, Neal Purvis, and Phoebe Waller-Bridge in writing the screenplay, does an amazing job in giving the audience a final look at not just Craig as Bond but also those who have joined him on screen for multiple movies, including Ralph Fiennes as M, Naomie Harris as Moneypenny, Ben Whishaw as Q, and Rory Kinnear as Bill Tanner.

Whishaw, in particular, gets a noticeable increase in screen time, which is more than deserved and also makes sense given how his relationship with Craig’s Bond has evolved since his first outing as Q in “Skyfall.” I cannot pile enough praise onto Whishaw’s portrayal of Q over the three Bond films he has been in, and the deeper glimpse we get of MI6’s Quartermaster in “No Time to Die” is also brightened by a brief but key line Whishaw delivers about expecting a man to come over for dinner while Bond and Moneypenny have stopped by to ask for help. Though it is spoken as a throwaway piece of dialogue and could be viewed as nothing more than an implication, I was struck by the acknowledgment from both the movie and the Bond franchise of Q’s sexuality, which marks an important step in normalizing LGBTQ+ characters within existing blockbuster franchises.

The new characters of “No Time to Die” are also well portrayed. Lynch does a wonderful job as Nomi in partnering Craig on screen and being built into a distinct MI6 agent who we believe can more than deliver as 007 following the end of the movie. While de Armas sadly only appears for a short sequence in Cuba, she is stunning for every second she is on screen as the highly capable Paloma. Waltz’s Blofeld also returns in a similarly brief appearance in “No Time to Die,” and he does a satisfyingly creepy job for the ten or so minutes he’s on-screen before being killed off by the bioweapon and sparking the next part of Bond’s hunt for Safin.

In the end, Craig’s 007 does eventually find time to die by the end of the movie as he realizes that he needs to sacrifice himself in order to destroy the island lair where Safin has been mass-producing the bioweapon. It’s a noble choice, and it feels very much in character for Bond to go out like this. Though the movie struggles to prove just how high the stakes are, and the simultaneous melodramatics of Bond saying his final goodbyes to Madeleine and her daughter—who (surprise!) is actually Bond’s child— dragged down the final scene for me, it is certainly a fittingly emotional and action-driven sequence with which Craig’s Bond is finally taken out.

Besides the plot and characters, the other major takeaway I had from the movie was about its score and music. Billie Eilish’s theme song deserves a shout-out as a haunting, fitting track for Craig’s final Bond film, and composer Hans Zimmer, to nobody’s surprise, does an excellent job of scoring the rest of the movie and bringing the melody of Eilish’s song back into play throughout.

With an estimated $250 million production budget and at least $100 million in promotion costs, “No Time to Die” will need to overperform its current run so far at the box office in order to make back the estimated $900 million it needs to break even, a tall order even in a non-pandemic box office. Even if this isn’t the most financially successful Craig Bond movie, though, it is certainly not the worst, and that is more than enough for Daniel Craig as he departs the franchise and leaves behind a significant impact on the role of James Bond.