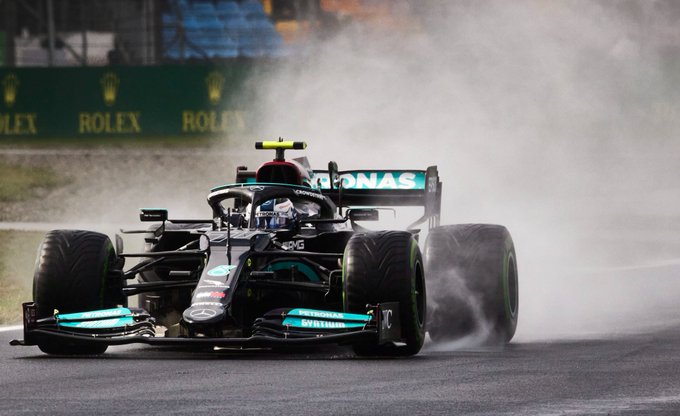 It was another weekend of engine penalty drama and wet weather racing in this year’s Formula One (F1) calendar at the 2021 Turkish Grand Prix (GP), which took place from Friday, Oct. 8 to Sunday, Oct. 12 at Istanbul Park. Lewis Hamilton, who came into the weekend with a mere two-point lead over Max Verstappen in the Drivers’ Championship, saw his role from the 2021 Russian GP reversed as Hamilton focused on damage control after his engine change grid penalty and Verstappen aimed to flip the championship lead.

Though the ongoing pandemic and differing national COVID-19 restrictions nearly prevented the Turkish GP from taking place, it finally went on after initially replacing this year’s postponed Canadian GP and then being added back to the calendar to replace the canceled Singapore GP. As the F1 grid returned to the track where Hamilton claimed his record-equaling seventh world championship title last year, this year’s much closer title fight was at the center of the weekend’s events.

The biggest news going into the weekend ahead of the three free practice (FP) sessions was the announcement that Hamilton would be receiving a new Internal Combustion Engine (ICE), meaning that he would take a 10-place grid penalty for the race. Ferrari also announced that Carlos Sainz would be taking a new engine and thus, a grid drop to the back.

FP1 and FP2, both run on a dry track, didn’t see many unexpected shifts from the generally established order, with Mercedes and Red Bull running well and Hamilton setting the fastest times in both sessions. Ferrari’s Charles Leclerc also drove very well in both sessions, placing third in FP1 and second in FP2 to emphasize Ferrari’s improvements over the course of this season.

FP3 was the only wet-free practice session, with the many spins and off-track encounters for the drivers creating concerns about the conditions for the qualifying session later on Saturday. Hamilton finished the session in an uncharacteristic P17 after spending much of the session in the garage working with his engineers and pit crew, while Alpha Tauri’s Pierre Gasly took P1 ahead of the Red Bulls of Verstappen and Sergio Pérez.

Though the drivers needed intermediate tyres (inters) for FP3, the qualifying session later that day was dry enough for the drivers to use slick tyres for all three parts of the session. Hamilton dominated the session, consistently setting the fastest times over Q1, Q2, and Q3.

The big shocks of Q1 were Mick Schumacher taking his Haas through to Q2 for the second time this season, where he would end up taking a career-best qualifying position of P14, and Daniel Ricciardo being knocked out in P16. The McLaren driver had been on a run of good results after a disappointing first half of the season, but this poor qualifying session made it all the easier for the team to decide that Ricciardo would take a grid penalty and a new engine.

Sainz, who would be starting from the back of the grid after his engine penalty, didn’t bother with any running after making it through to Q2. His teammate, Leclerc, made it through to Q3 and ultimately finished in a very strong P4. It was a disappointing second part of qualifying for Aston Martin’s Sebastian Vettel, however, who went out in P11 on the track where he’d finished on the podium last year. Alpha Tauri, on the other hand, saw both their drivers making it through to Q3, with Gasly coming in behind Leclerc to take P5 while teammate Yuki Tsunoda finished in P10.

Though Hamilton took the checkered flag with the fastest lap and set a new track record of 1:22.868 seconds, his ICE change penalty meant that his teammate Valtteri Bottas would start on pole for Sunday’s race. Hamilton’s final starting position of P11 would leave him aiming to replicate his drive from the 2020 Turkish GP, where he started from P6 and went on to take the win and his seventh championship title.

While the track remained dry enough for slick tyres during qualifying, it was inters all around as the drivers lined up to take their spots on the grid on Sunday. As the lights went out for the 58-lap race, it looked as though Verstappen had gotten a better start from his grid spot on the inside line, but Bottas managed to securely hold P1 before Turn 1.

Alpine’s Fernando Alonso, who had qualified very well in P6, came off worst during the start as he made contact with Gasly and spun off the track, rejoining towards the back of the field. Alonso then had a run-in with Schumacher shortly into Lap 2, spinning the Haas around while trying to pass Schumacher on the inside. The stewards handed out five-second time penalties to Gasly and Alonso for those respective incidents, though the penalty for Gasly was felt by both himself and Alonso to be harsh given that their contact had happened in the chaos of the first lap.

After the dramatics of the first few laps, though, the drivers generally settled into their positions, with not much movement from the top four as Bottas led from Verstappen, Leclerc, and Perez. The two exceptions were Hamilton and Sainz, who both made strong progress through the field, with Hamilton overtaking his way to P5 behind Perez and Sainz steadily making up places to push through into the points.

Ricciardo, who had started behind Sainz at the very back of the grid, did not have as much luck with making his way through the field. Though he was the first of the field to pit, he could only manage to make his way up to P13 from P20 by the end of the race and was kept out of the points. As the rest of the field gradually began to come in for pit stops, Vettel was the only one to attempt a change to dry-weather tyres as he took on a set of mediums. That experiment, however, only lasted for a lap as Vettel immediately struggled and came in at the end of that lap to switch back to inters.

After his brief scare at the start of the race, Bottas held the lead all the way until lap 38, when he came in for his pit stop to switch to another pair of inters and ceded P1 to Leclerc. Verstappen and Perez also pitted, finally allowing Hamilton into P3 after an excellent defense from Perez’s Red Bull. However, in P1 and P3 respectively, Leclerc and Hamilton stayed out to go long on their original set of tyres, pushing the limits of how far the inters could go. While Leclerc and the Ferrari pit wall debated attempting to go until the end on just one set of tyres, he eventually pitted after being passed on track by Bottas, who retook the lead at the start of Lap 47.

Hamilton was in the midst of a similar debate with his race engineer throughout the final stages of the race and chose not to come in when the team first called him into the pits, electing to stay out and keep his track position instead. Finally, he was convinced to pit on Lap 51, when he switched to a new pair of inters and came out of the pit lane in P5 behind both Leclerc and Perez. Though the Mercedes pit wall may have expected Hamilton to be able to make up ground in the final eight laps of the race, he was instead forced to defend from Gasly behind until the end of the race in order to protect his fifth-place finish.

Hamilton’s teammate Bottas, by contrast, conducted a commanding performance after retaking P1, increasing his gap to Verstappen behind as he took the checkered flag and his tenth win in F1 with a 13-second gap to Verstappen behind. Perez, who had overtaken Leclerc on track after the Ferrari’s pit stop, came home in P3, with Leclerc and Hamilton finishing in P4 and P5 respectively. It wasn’t the best result for Hamilton given his desire to prevent Verstappen from taking a big lead in the championship, but the six-point swing in Verstappen’s favor was not the worst possible outcome after Hamilton’s engine penalty.

It was also a close finish for Alpine’s Esteban Ocon, who took the final points position in P10 and became the first driver in the V6 era to finish a race without a pit stop after driving all 58 laps on his original set of inters since drivers were not required to use two sets of tyres due to the wet weather.

It was ultimately a strong showing for Red Bull with their double podium, but Mercedes maintained its lead in the Constructors’ Championship with 433.5 points to Red Bull’s 397.5. In the midfield, Ferrari still came away from the weekend chasing after McLaren in third place, while Alpine remained in fifth ahead of Alpha Tauri and Aston Martin.

Verstappen now leads Hamilton by just six points in the championship as the grid heads to the Circuit of the Americas in Austin, Texas for the 2021 United States Grand Prix, which will be held from Friday, Oct. 22 to Sunday, Oct. 24. As F1 finally makes its way back to the United States, the championship battle is certain to remain at a fever pitch.
Jiyu Shin can be reached at jshin01@wesleyan.edu.