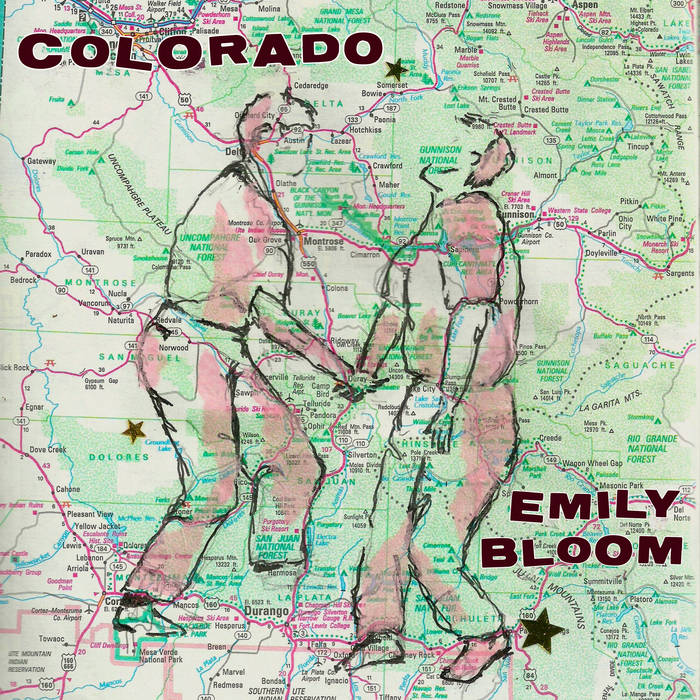 This is an installment of the Artgus Artist Spotlight, an ongoing series presented by the Arts & Culture section, intended to highlight the artistic talents of the wider Wesleyan community. To nominate a student artist for a profile, go to tinyurl.com/3ttmszh4. In this installment, Staff Writer Jacob Silberman-Baron ’25 spoke with Emily Bloomfield ’22.

Bloomfield writes and records music in her spare time. Last spring, she released an album titled “Don’t Mind the Ghosts” under the name Emily Bloom. The album is available to stream on Spotify.

The Argus: Tell me about your process for writing a song.

Emily Bloomfield: Usually, if I’m writing by myself, I’ll just sit down with my guitar and start playing some stuff, and then figure out some chords I like or a little riff. I’ll start writing the melody to a small amount of music that I’ve written…and then the melody and the chords will kind of work together to figure out sections and stuff. I have never written all of the guitars, then all of the words, and I’ve never written all of the words and then all of the guitars. It always happens together. I don’t think I’m particularly gifted at the guitar; part of it is hearing other melodies in my head, where I’m like, “Okay, how can I figure that out?” I think I’m much stronger at writing lyrics and melody, so that often drives where the guitar goes, but I need somewhere to begin.

A: Who are your collaborators?

EB: I’m working on that. On the album, it’s awesome because everybody who played was pretty much my best friends. The person who did all of the percussion is a really good friend of mine from high school, and she just killed it. I wrote all the music by myself, though. All of the arranging was total collaboration. I didn’t write anybody’s parts. They all wrote their own parts, and I would give them leading things like “I don’t love that,” but they’re all so talented that they would just come up with a million things and be like “What’d ya like?” Recently, this semester, since I’m a senior, I’ve been really nostalgic. This is probably the last time that I’m going to be in this small of a community with this many people who I know and think are such amazing and talented musicians. So, I’ve been writing a little with Nic Catalan [’22]. They’re in a band here called Mother’s Friends, which has been really lovely. Actually, later today, at four, Audrey Mills [’23] is coming over. She’s a junior. She also releases music. And we’re going to try to write some stuff together. And then my other band, Sweetburger, we all write all of our stuff together.

A: Do you take music classes here, or is it entirely on the side?

EB: It’s entirely on the side. I’ve never taken a music class here. I have this fear that if I learn too much about music, I’m not gonna be able to write it anymore. It feels like such a sacred and organic process for me that I get nervous that if I know what I’m doing, I won’t be able to get over that to make things anymore. I’m gonna get in my own way.

A: Could you tell me about a specific song, and then talk about the process for it?

EB: I can talk about “Colorado.” That was a pretty easy one. We were in quarantine, but I was really thinking about wanting to leave and being stuck. And my friend Liam Caplan [’22], who I live with now, is from Colorado, and I was like, “I’m gonna drive out by myself, and find a farm, work on this farm, so we can hang out,” because we’re both like, “We’re so lonely and this is so fucked up.” So I sat down with my guitar. Whenever I can’t write, I change the tuning of the guitar, so I like to make the instrument feel foreign to me. It’s really helpful, ’cause then I’m just looking for sounds that I like. I’m not like, “What chord is this, and where could this go in my brain?” It’s kind of similar to what I was talking about with music classes. So, I found these chords. I wrote it in open D, which is a tuning that I write in a lot. I started writing these words which, very easily, I realized were about driving to “Colorado.” But I wasn’t thinking “Okay, where could this storyline go?” It just vomits out of me. And then I’m like, “Oh, this is what this is about.” As soon as I have that realization, it makes it easier to write other words, ’cause it’s what I’m thinking about anyway.

I feel like a lot of it is very image-based. Looking at the lyrics of my songs, I realize that pretty much each verse is a picture that I’m describing or a scene. It’s hyper-specific cause that’s what I love. In poetry or in reading, I love the hyper-specific long fluffy details. It’s like my favorite thing. I finished “Colorado,” and I wanted it to be triumphant and this “I need to go” [feeling]. And I ended up going, ’cause I went to Idaho. That was like the big victory of that song. But once it was over, I looked back through the lyrics and I was like, “Oh shit, I’m talking to my parents in the beginning,” and it’s this dialogue with my parents, and the chorus is about me being in the car and this feeling of not knowing what the fuck I’m doing and being alone. And at the end, it was like this proclamation of “I’m okay,” this has been really hard but I’m okay. But I never have that during the writing process. I always have that as an afterthought.

EB: It’s almost hypnosis. And what’s actually remarkable is that after releasing this album, I don’t feel this way when I’m writing anymore. It feels so much more casual. But for my life before this, writing music was so not casual. It was really intense and emotionally draining, and whenever I was in the middle of the song and I couldn’t finish it, it was like the worst feeling in the world, and I would obsess in my brain about it and not be able to let it go. And now, I’m chillin’. I’ll write a verse, and then I’ll get up and walk away. It was so much a needed release. It was like all of my feelings were bubbling up inside of me, and the pot was starting to give. I needed to let the steam out.

EB: It’s an interesting question. I’ve been thinking about that too. For so long, I was writing music to get to know myself better. It was really so introspective, in a way where it was sometimes actually too much. I was just having a hard time. Quarantine especially was tough. I was writing about what I was thinking about and feeling. I was really going through the mud…. And now my life has been much more steady, so I’ve been able to have fun with it more…. My songs have been a lot lighter recently, sometimes a little funny, I think, or like totally fictional stories. Which has been a really fun change. But I do miss the hypnotic, really intimate feeling that I used to get writing songs, because I just don’t have it anymore, or I haven’t had it in a long time. 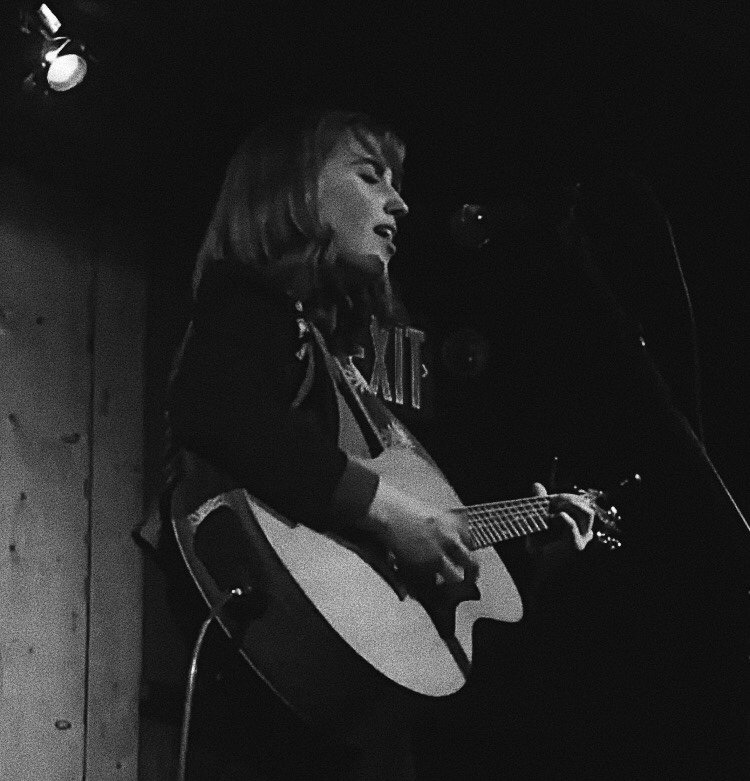 A: What are your favorite lyrics?

EB: I think maybe my favorite lyric on the album, or one of them, the song that I feel the most connected to the lyrics is the last song on the album, “Ladybugs in the Spring.” I love the phrase “take fair precautions.” I love the idea that this song is a warning. I didn’t think about that when I was writing it at all. It just happened. But I would say, as a whole, lyrically, that song is my heart and soul. It just said exactly what I meant…. I love the lyrics on “It’s Not Your Fault You Were Sleepy.” I did that as a live take on purpose, because the lyrics are so intimate and close to me that I wanted the authenticity of a live performance. I didn’t wanna nitpick how I sang it or how I played it, so I recorded that in one take. There were like four mics in the room, and I was just like “go.” And we just played it through and that’s what’s on the album. Barely any mixing…. And the last verse of that song where I say, “You went to bed early / You fell asleep on the couch / I was reading about other people / And you left the stove on / You forgot to turn it off / When your mom said she’d call.” That whole really quick dialogue I’m proud of. Yeah, I like that song a lot.

A: You’re a senior. Any idea what you’re doing?

EB: I’m thinking about it. I think I have two answers. One is like my pipe dream, which would be, I would want to tour, like a little tour, I have this image of me and Josh [Markowitz ’22] playing at a bunch of these little DIY venues, just to play. I miss playing live so much that right now all I can think about once I’m able to is to go and play as much as I can. Maybe people listen, or maybe people hate it, but at least I can say that I tried. That’s been my pipe dream.

I think, in reality, I work at a coffee shop in Middletown that I love. I love my job. I love my coworkers. I work at Perkatory Coffee Roasters, plug. And I love it there. I love working there. I feel like I need a break from school and from reading for years. I’ll work a job, and I’ll figure out my shit, and I’ll write a bunch of music and try to play as much music as I can. And I’ll take it from there.

A: And you’re a history major.

A: How does that fit into all this?

EB: That’s an awesome question. I think about it all the time. I don’t know. For a while, I was like, “Yeah, why am I a history major?” I’m writing a thesis, and doing my thesis research. I’m like, “This is the greatest shit ever.” Really what it is is that I’m extremely nosy and I have so many questions about things. And so I’ve been doing archival research. I’m doing my research on Middletown. I’ve been going to the historical society and looking through old books and whatever. But it does relate to music in that I like to try to figure things out. If I was to try to find a throughline in all of the things that I like, it’s problem-solving. And with my music, it’s like problem-solving with my life. And with history, it’s having questions and trying to find them in history. Although I think that’s also a huge stretch, and maybe just an answer that works for this question. But I’ll stand by it.

A: Anything else you want to say?

EB: I love music. It’s the greatest thing that’s happened to my life. One thing is, if you write music, share it with other people who write music and collaborate with people. Because I feel like I came to that really late. And now I’m like, making music does not have to be a lonely thing. It can be so collaborative.