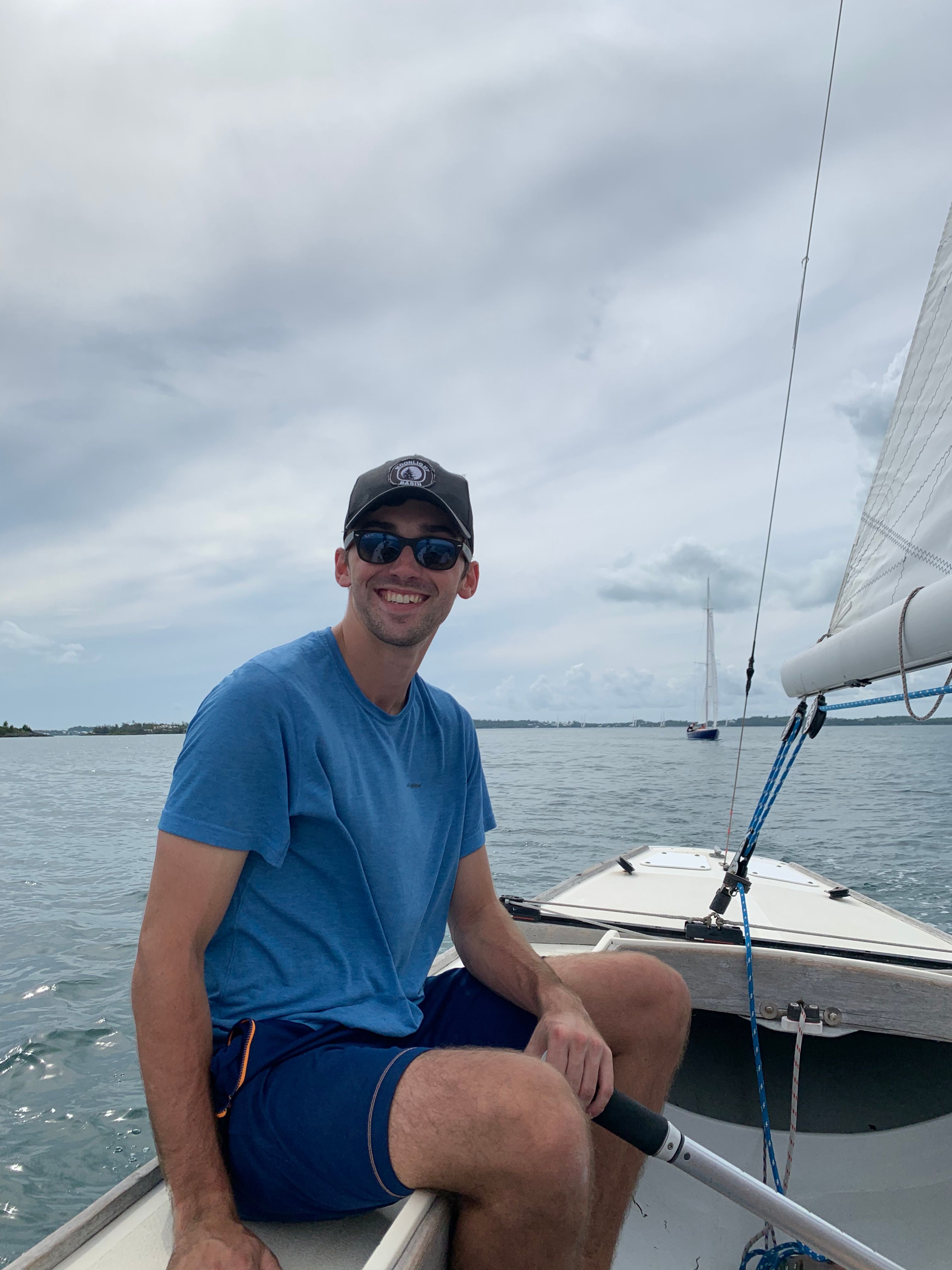 Students coming to Wesleyan can anticipate plenty of opportunities. Taking advantage of the open curriculum? Joining clubs? Working on research projects? All reasonable expectations. But leaving school for a few days to win a world championship sailing race in the Caribbean? That’s not something you see every day. However, this is precisely what happened to sailing team captain Ned Herrington ’22, who manned the foredeck of the winning boat in the International One Design (IOD) World Championship regatta from Sept. 12 to 18. Racing off the coast of Bermuda, Herrington and his team secured the first-ever championship from his home fleet of Northeast Harbor, Maine. The Argus sat down with Herrington to discuss his history as a sailor and his experience winning the championship regatta.

The Argus: How and when did you first get involved with sailing?

Ned Herrington: So both my parents raced in the IOD fleet in Northeast Harbor [Maine] when I was a kid, so I started in the sailing school there when I was like five or six. I’ve just been doing it ever since. I’ve always kind of loved it. I really enjoyed racing.

I started racing when I was working through my eighth season, on a team that was not super hot. I was a kid who was learning for two years, and then I’ve just kind of worked my way up through the kind of mid-fleet teams and then some pretty competitive teams to where we are today.

A: Why did you decide to join the sailing team at Wesleyan?

NH: I always wanted to sail in college. Applying [to college] the first time around, I ended up at NYU, which does not have a sailing team for kind of obvious reasons.

A: I guess you’re not out there sailing on the East River. You wouldn’t want to fall in.

NH: [Laughs] No! There actually is an IOD fleet in Manhattan that I did race with a couple of times while I was there, but that’s obviously very different from the sailing we do here or sailing ships. When I came here, it was just kind of obvious that it would be something I would do, and I’ve absolutely loved it. I’m very happy with the people on the team. The people are incredible, and the vibe is exactly what I want from sailing. There are other teams that obviously take it a lot more seriously, but for us, it’s just fun to be out there and fun to compete as well.

A: Did you ever think, joining Wesleyan sailing as a sophomore, you would be starting your senior year as a world champion?

NH: This is something I thought I would want to do and probably do someday. I’m shocked it happened this quickly. No one from the Northeast Harbor had ever won before this, and that includes some really, really good sailors who have tried very hard. When we’ve hosted the world championship and had the home field advantage, no one has won.

This? This was kind of on a whim. I said I couldn’t go originally because I needed to be here at school, but they needed someone to fill in for the first three days. So I stepped up, I went to Bermuda and was missing days of school. It was kind of a whirlwind. And then we won! It’s just crazy. So yeah, I definitely did not think it would happen so soon.

A: You sailed with helmsman Tom Fremont-Smith, who steered the boat to victory. How did you come to be on his team?

NH: I was racing with Parker Brown in the Northeast Harbor fleet. We were pretty competitive. We had a season finishing fourth, which we’re really happy with. And then, I think it kind of imploded. So I didn’t really have anywhere to go. I had a friend who was racing with Tom, but who was a senior in college, so he knew it was kind of his last year. So he put me in contact with Tom, and I started sailing with Tom the next summer. And it’s gone really well. I mean, we finished second a couple of times. We have yet to win the Northeast Harbor fleet [regatta], despite having won the world championship.

A: What was the preparation like for the race? I know you said you got pulled in pretty quickly just at the start of the school year.

NH: [Over the summer] we were still in Maine competing in the series. We had a really good first half of the series. We were one point off the lead. We thought that was like something very winnable for us, something we’re really excited to do. We suffered from a lot of burnout in the second half, and really did not finish very strong. But during that same period of time, Tom was starting to get the crew together who were coming to Bermuda and doing some practices with us.

A: I was not aware of the relative wind speeds between Maine and Bermuda.

A: How was the experience of being in the race itself? What were you thinking in the moment?

NH: Why I love racing and sailing generally so much is because it just requires your complete attention. You experience a ton of time dilation just because you are so locked into so many different things. It’s doubly true for steering, which obviously I wasn’t doing, but even for my job, which was just to keep my head out of the boat, looking at wind, keeping an eye on our competitors, just relaying information back to the people who are calling the shots. You’re just so locked in.

The big difference in these away regattas in general and in particular at the world championship is just that everyone is so good. There are no straggler teams. Everyone is always one hundred percent on it. You can always learn something from their heading or what they’re thinking strategically. So it’s just even more stuff to have to stay on top of.

A: Do you think you would participate in any more IOD regattas in the future?

NH: Absolutely. For me, this is kind of bittersweet for two reasons. One, I wasn’t there for the whole thing. I wasn’t there to have that moment of vindication with the team. And two, the real mountaintop, I think it’s to steer, to skipper. That’s something that I won’t get a chance to do until I’m at least thirty, thirty-five, but that’s something I would love to pursue in the future for sure.

A: Now that you’re a world champion, what would you want to say to our Web Editor and your sailing team co-captain Nalu Tripician ’22?

NH: [Laughs] He started here, at Wesleyan. Maybe one day, if he keeps grinding, he can reach the mountaintop as well.