Journey To The Past: A Look Inside the 1954 PAC Time Capsule 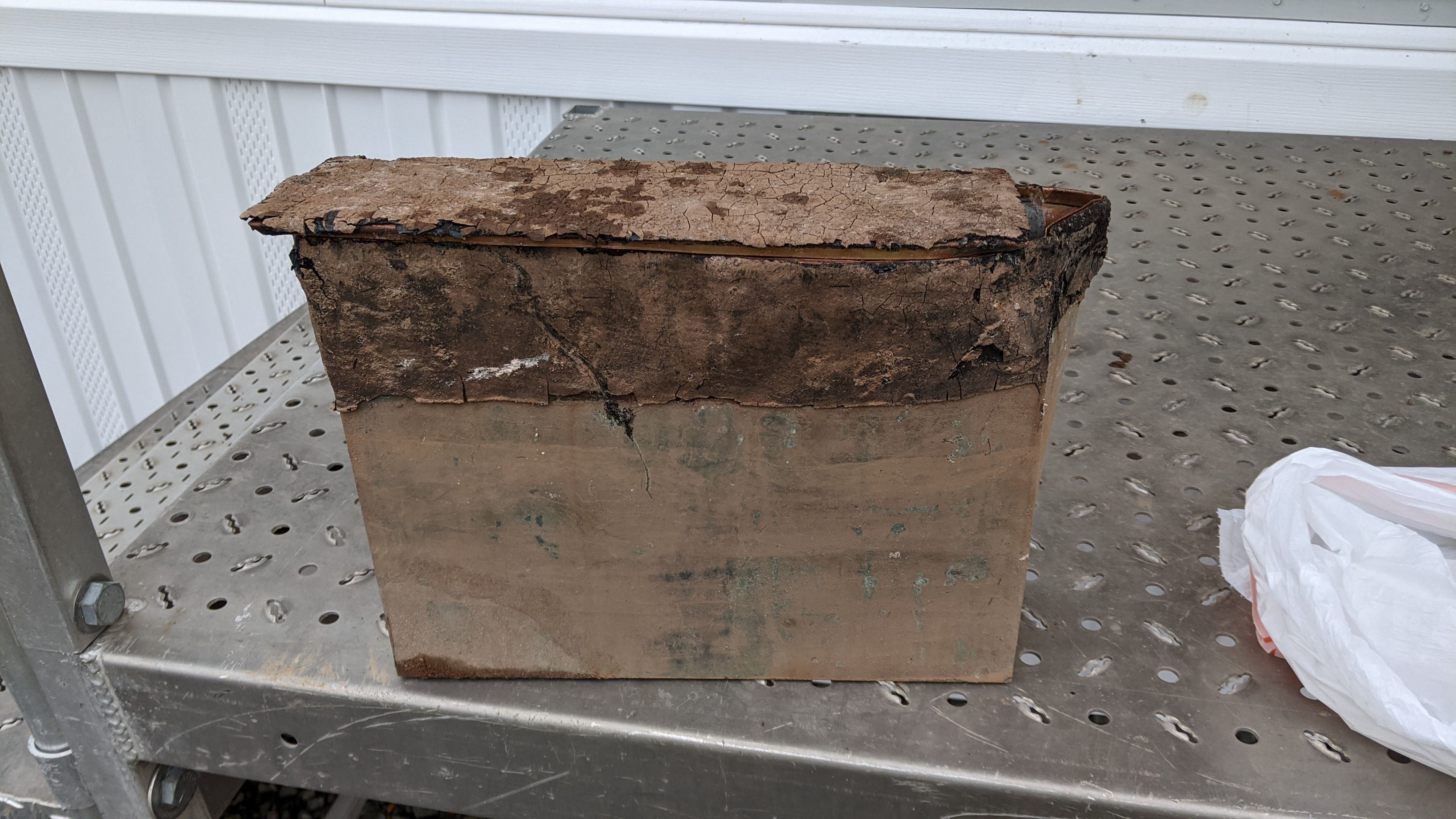 When the construction team broke ground on the renovations to the John E. Andrus Center for Public Affairs (PAC) in June, they intended to build a new piece of campus history. However, on Sept. 17, construction workers on-site discovered a hidden part of Wesleyan’s past: a time capsule buried within a concrete block from the now-demolished 1954 addition to the PAC.

The 67-year-old capsule, a copper box discovered by a demolition contractor near the east wall, contains 26 items of University history, from admissions pamphlets, to building project reports, to old copies of The Argus. According to archivists, the time capsule took some time to catalog in the Special Collections & Archives department of Olin Memorial Library, but now belongs to the University’s trove of historical artifacts.

University Archivist Amanda Nelson played an active role in unpacking and cataloging the contents of the capsule. Although the intent behind burying the capsule remains unknown, Nelson hypothesized that it was buried to mark the construction of the 1954 addition to the PAC.

“This fits very much with sort of what would have happened, where if you were expanding a building, you wanted to create a snapshot of what was going on at the University at the time,” Nelson said.

Nelson received the capsule from Facilities and Physical Plant Project Manager Michael Rosalie, who was overseeing construction on-site at the time. Rosalie expressed his initial excitement and curiosity over the contents of the copper box following its discovery among the debris of the east wall.

“[I am] happy we have careful and experienced contractors, who are knowledgeable and interested in their work, and took the moment to investigate,” Rosalie wrote in an email to The Argus. “I appreciate the capsule’s copper construction and its placement underneath the entry slab.”

In fact, the location of the capsule and the concrete it was buried in helped to preserve the box and its contents for over six decades. Most of the paper materials are in mint condition, aside from a little rust on some of the staple bindings of the booklets.

“So [the box] came to me open,” Nelson said. “When the machinery hit it…whoever was in charge of the excavator had worked on other universities and had similar things happen. So as soon as he hit it, he knew what it was and stopped…The top had popped off, which actually was helpful to me because otherwise, I would have had to figure out how to open it, not knowing what was in it, which would be a lot more difficult.”

Nelson said she would have feared accidentally damaging the contents of the capsule if she had needed to open it, and was glad she didn’t need to.

Special Collections Cataloging Librarian Maggie Long witnessed the initial reception of the time capsule and described her experiences in an email to The Argus.

In examining a copy of The Argus from right when the PAC addition began in 1954, Nelson noted the intention behind including such an artifact.

“You can see there’s the actual image of the groundbreaking,” Nelson said. “There is some material from development, so they obviously wanted to let it be known who were the people behind the actual funding of the addition, as well as what else was going on, from a development point of view in the whole university and just where everything was at that particular moment.”

A building project report summarizing the PAC addition was also included in the capsule.

“One of the principal effects of the development of a Public Affairs Program has been the drawing together of the social science faculty members,” the report reads. “Where not too long ago there was an intense specialization with its attendant language barriers, the members of the government, economics, and history departments have now come to realize how their special fields overlap and how unreal were the traditional departmental lines.”

Nelson noted the formal style of communication present in this report and in the other pamphlets and paper documents from the time capsule.

“How much text is in each [item]…is really just kind of staggering and astounding because you think now it’s either all pictures with very little writing or just sort of one off little things,” Nelson said. “Like we just communicate in a very different way than booklets and beautiful pamphlets and those kinds of things, but it’s a lot more of an informal way of communicating now.”

Caleb T. Winchester Librarian Andrew White observed the capsule being unpacked and commented on the experience.

“When Amanda Nelson first told me, I was excited and very curious,” White wrote in an email to The Argus. “I was surprised by the lack of personal materials—no handwritten notes…I was reminded of the history all around us and how cool our jobs are.”

White isn’t the only one surprised by the lack of a handwritten or personal note. Nelson also noted that every item in the capsule was a printed University publication.

“The one thing I really was hoping for was like a note from the President or somebody from the board just…a little bit more personalized, that would have been nice,” Nelson said.

However, despite the lack of anything personal preserved in the copper box, the contents still speak to the University at a specific moment in time. Observing the black-and-white photos in the admissions pamphlets, Nelson noted that the demographics of the school were completely different sixty-seven years ago.

“This is definitely before the age of when Wesleyan became what it is today,” Nelson said. “So it was an all-male school at that point in time, primarily white. There were a few students of color, but not very many.”

In addition to providing a window into University life six decades ago, the time capsule also raises questions of what other hidden historical documents there might be on campus.

“I am wondering where other time capsules might be located or if there are others?” Long wrote. “Is there a list? What would each one of them include? Would the contents be similar to this one and include only printed publications or is it possible others would include more personal narratives? I was wondering…when the next one will be created.”

White, too, expressed his interest in future time capsules.

“Let’s revive the tradition,” he wrote. “Think about what you would contribute to a time capsule!”

Nelson, who agrees there must be more time capsules around campus, explained that some capsules come with instructions for when to uncover them, and others, like the one from the PAC, are simply placed within buildings for discovery at some point in the future.

“I think this [capsule] was meant to be there for a while and it just so happened because of our expansion, we get to see what was in it,” Nelson said.