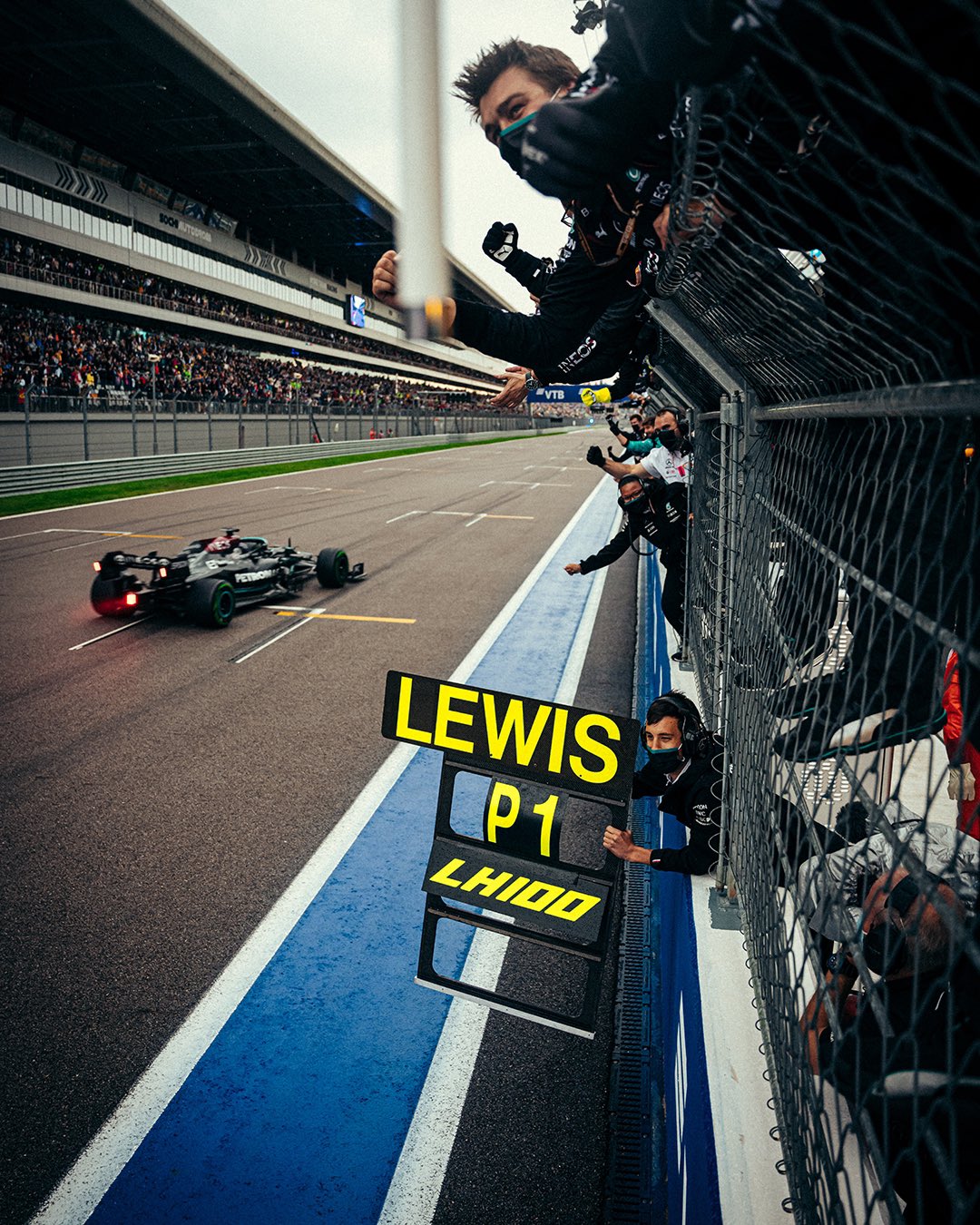 For a race that has typically been one of the least eventful weekends of the Formula One (F1) calendar, the 2021 Russian Grand Prix (GP) proved to be an exciting change of pace. The dramatic events of the weekend were likely stirred along by the tight title fight between seven-time world champion Lewis Hamilton of Mercedes and Red Bull’s Max Verstappen that has dominated this season.

The two drivers came into the race weekend, which took place from Friday, Sept. 24 to Sunday, Sept. 26 at the Sochi Autodrom, with Hamilton trailing just five points behind Verstappen. Given that the Russian GP has only ever been won by Mercedes drivers and the team has completely dominated this track in the hybrid era, it may have come as no surprise that Hamilton earned his 100th win this weekend, an unmatched milestone in F1 history. The unexpected drama and weather, though, turned this year’s Russian GP into one of the most memorable races of this season.

It was business as usual in Russia during the first two Free Practice (FP) sessions, with the two Mercedes cars driven by Hamilton and teammate Valtteri Bottas topping the timesheets. Bottas led Hamilton in both FP1 and FP2, with the rest of the grid generally slotting into their expected positions. Some of the exceptions higher up in the grid were four-time world champion and Aston Martin driver Sebastian Vettel finishing P5 in FP1 and Alpha Tauri’s Pierre Gasly slotting in behind him at P6 in FP1 and a superb P3 in FP2.

However, FP3 was canceled due to heavy rain, raising concerns about qualifying and the race itself. After the suspension of the 2021 Belgian Grand Prix at the end of August, the last thing F1 needed was another race to be ruined by the weather.

Following the cancellation of FP3, doubts about weather abounded. However, the rain soon lessened enough for the qualifying session to proceed on Saturday afternoon, albeit with the drivers on the Pirelli needing wet-weather suitable intermediate tires.

The first part of qualifying was notable, since Verstappen skipped the timed run. This was because Red Bull knew he would already be sent to the back of the grid for an engine change penalty. After being handed a three-place grid penalty following a race-ending collision with Hamilton at Monza, Red Bull decided to take an additional penalty and replace Verstappen’s engine and Power Unit, since he would already be dropped down the grid.

Similarly, Q2 saw Ferrari’s Charles Leclerc eliminated after not doing a timed lap since he would also be taking an engine change penalty.

The biggest shock of qualifying came in Q3 as Mercedes was caught on their back foot towards the end of the qualifying session. With a dry line beginning to form on the track, teams started pulling their drivers in to switch to slick tires for their final timed runs.

Mercedes was late to this tire change, and ran into additional issues as Hamilton hit the wall on his way into the pits, needing a nose change along with his switch to inters, which then led to a hold up for Bottas as he waited for the pit crew to work with Hamilton’s car. The final minutes of the qualifier only got worse for the team, as Hamilton then completed his out lap, but spun during his final timed lap, negating Bottas’ chance for a final run as well. Hamilton and Bottas ultimately qualified in P4 and P7 respectively, with Bottas then dropping to P17 after qualifying had finished for an engine and power unit change.

Mercedes’ underperformance in Q3 paved the way for Lando Norris to take his first-ever pole position for McLaren, making him the fifth youngest pole-sitter in F1 history and giving McLaren their first pole position since Hamilton in 2012. Alongside him on the front row was Carlos Sainz’s Ferrari, followed by the Williams of George Russell in P3.

Red Bull, on the other hand, surely would have hoped for a better qualifying than P9 for Verstappen’s teammate, Sergio Perez, in order to make up ground in the Constructors’ Championship and help out Verstappen, who would be trying to cut through the entire grid during the race from last place. The fact that Mercedes also struggled to qualify well, though, likely eased some of the stress of the championship battle for Red Bull going into the race.

As the lights went out and the drivers pulled away from the starting grid to begin the 53-lap race on Sunday, the opening lap brought immediate, dramatic shifts in the order. The driver starting at pole in Sochi has not won the race since 2016, and this seemed to be the case again as Norris lost the lead to former teammate Sainz at Turn 2. Behind them, a poor start from Hamilton dropped him down to P7 while Leclerc and two-time world champion Fernando Alonso made up extensive ground. 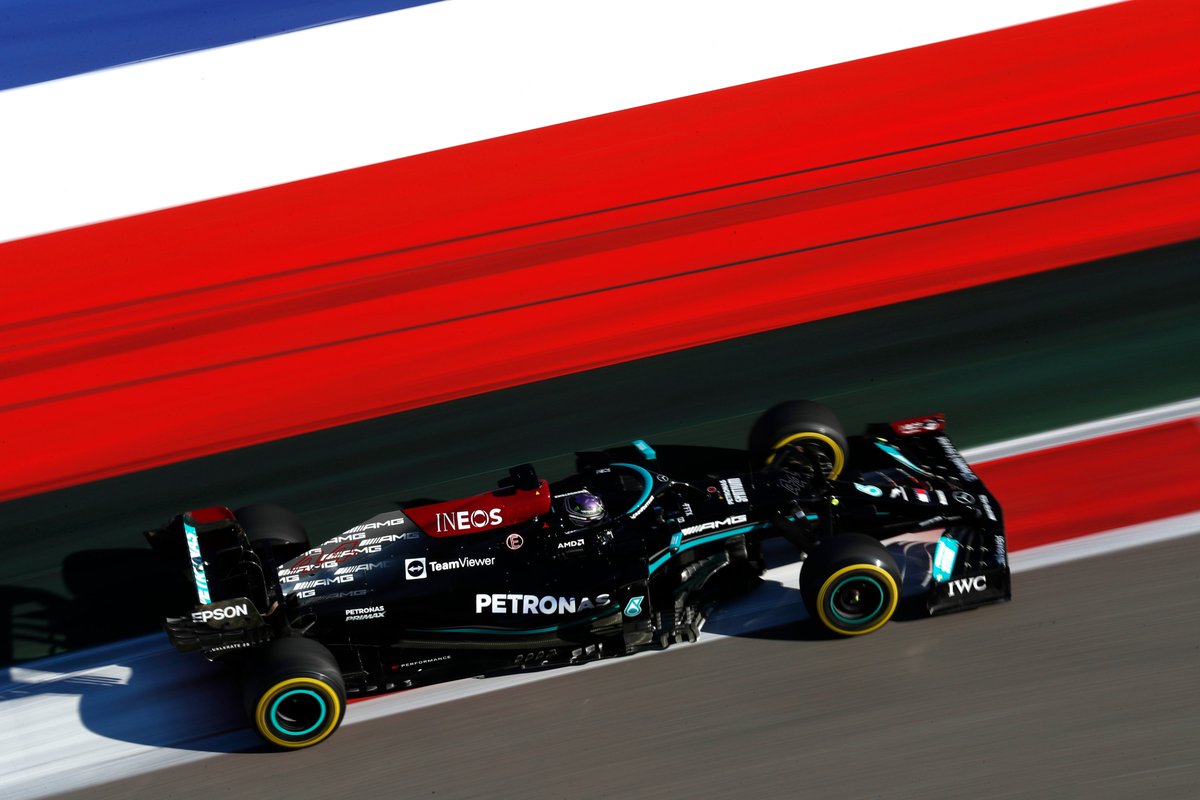 As the laps began to pass by, Norris made his way past Sainz’s Ferrari, on track to retake the lead on Lap 13. The pit stops began to kick off soon afterwards, bringing about the first round of drama in the race. McLaren’s Daniel Ricciardo was given a slow stop, allowing Hamilton to get ahead and work his way through the field from P9. Verstappen was on a similar upward climb through the grid, making it to P7 from P20.

However, everything was thrown into chaos when rain arrived on Lap 47. The pit stops once again played a decisive role in the race as teams and drivers either chose to take pit for intermediate tires or gambled with staying out on slick tires a little longer. Mercedes initially called Hamilton into the pits to change his tires, but after Hamilton ignored that call, the team told him they expected the rain to get worse, convincing him to come into the pits.

Norris was left in the lead after deciding not to change tires, but had to negotiate a track that was gradually getting wetter and wetter on his used slick tires, a task that proved to be too much when he went off track multiple times. It was this decision not to come in for inters that led to his downfall. Hamilton, who switched to inters and rejoined the race 25 seconds behind Norris, cut down that gap over just one and a half laps before making the overtake and taking the lead of the race on Lap 51.

Norris came into the pits on the very next lap and finished a dismal P7, a tragic result for McLaren after how much of the race Norris had led. It was also shocking given that if they had pitted Norris after Hamilton, they would likely have gone home with second place.

In contrast, it was all joy for Mercedes as Hamilton took the chequered flag and earned his 100th win, making him the first driver in F1 history to do so. The next two drivers with the most wins are seven-time World Champion Michael Schumacher with 91 victories and Vettel with 53 victories. Hamilton equaled Schumacher’s record of 91 wins in Oct. 2020 en route to his seventh World Championship title last season.

The chaos of the pit stops in the rain also allowed Bottas to finish P5 and saw Verstappen somehow finishing the race in P2 after starting last. Sainz rounded out the podium positions to take his second podium as a Ferrari driver.

While Verstappen was able to stave off a major momentum swing in the title fight, his teammate did not have the same luck at the end of the race. Perez, like Leclerc and Vettel, pitted a lap too late to make the switch to inters without losing extensive time to other cars who had already pitted.

Further back in the midfield, the weekend was an ultimately disappointing showing for Aston Martin and Alpha Tauri. Both teams had been going well in FP sessions, but gave disappointing showings in both qualifying and the race, with Vettel and Gasly both knocked out in Q2.

Though Vettel’s teammate Lance Stroll started at P7, he faced trouble defending from overtakes during the race, and almost ran his teammate into the wall once the rain started falling. On the other hand, Vettel showed a strong pace at the front of the midfield pack, but the final rain-driven pit stops proved ruinous to both Aston Martin and Alpha Tauri, and found both teams finishing outside of the points.

After a tenuous first half of the season, Mercedes has begun to creep away with the Constructors’ title, extending their lead over Red Bull this weekend to 33 points. In the drivers’ standings, however, the championship is sure to remain a close fight as the grid heads to Istanbul Park for the Turkish Grand Prix on Oct. 8 through Oct. 10 to kick off the last seven races of the season. Though Hamilton has taken the lead of the standings, with a two-point advantage of 246.5 to 244.5 over Verstappen after this showing in Russia, he is expected to take an engine change penalty soon, and will need as much luck as his title rival had this weekend in order to prevent the title from slipping away.