Wesleyan, Welcome to my Crib: Kendall and Scott-Weiner’s Butterfields Paradise

Since the beginning of the COVID-19 pandemic, many students have not been able to visit and admire each other’s dorm rooms and houses. Thus, Assistant Arts & Culture Editor Talia Zitner ’23 created the series “Wesleyan, Welcome to My Crib” to showcase the creativity and ingenuity of student interior design. This week, Emma Kendall ’24 and Jordan Scott-Weiner ’24 share their eclectic and cozy Butterfields double. 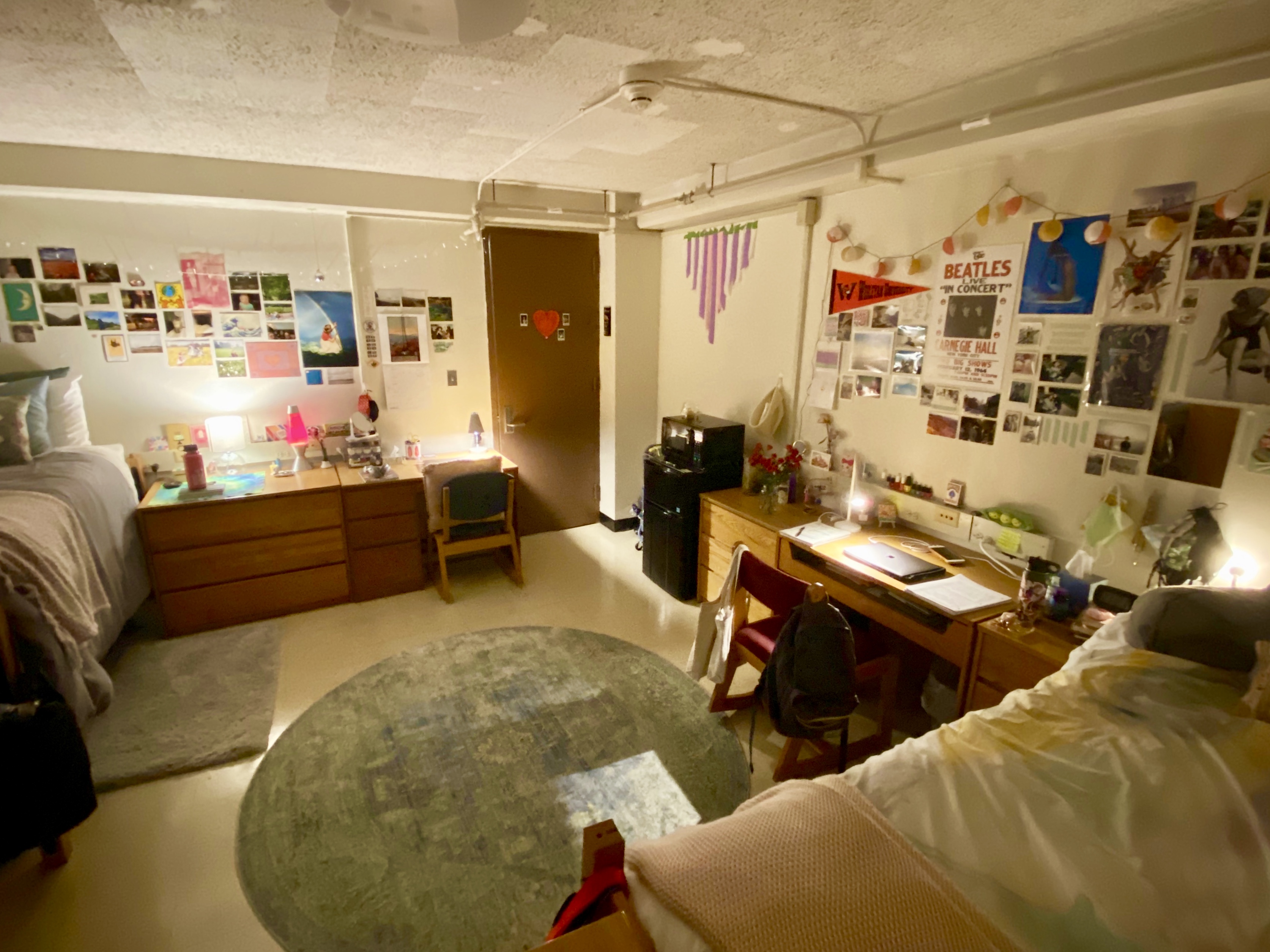 When Emma Kendall ’24 pulled Jordan Scott-Weiner ’24 into their Butterfields (Butts) C double at the end of the 2020 fall semester, the room seemed like a behemoth of a space, as it was larger than other rooms and therefore more difficult to tackle in terms of decoration. However, they’re both satisfied now with how cohesively their personalities and possessions merged to create the dwelling that you see today.

The walls of the dorm have been a work in progress ever since Emma and Jordan moved in. There was one period around the end of summer for Emma when pictures would fall off every day and nothing could hold them up. She tried command strips, painter’s tape, stronger command strips, and even duct tape, but nothing would stick until the weather cooled down a bit. She ultimately blames the issue on whatever mysterious material the walls are made of. Emma’s side contains quite the liberal arts kid collection: film photos of friends from home, birthday cards, vintage magazine advertisements from eBay, postcards, some artwork (including art made by her brother), and even a mini watercolor canvas painted by actual snails. There’s also a Summerfields receipt or two from the Zingle days. Ikea lanterns attempt to add warmer light to the space, but since they’re solar-powered and for the outdoors, they only turn on sporadically for short, random bursts. Overall, the entire wall is probably Emma’s favorite part of the room. When she’s sitting at her desk during a long Zoom class, she can just look up and be comforted by her pastiche of familiarity.

The little ledge above her desk holds objects like a bunny-shaped stress ball, an off-brand Tech Deck (gifted by Jordan, who has a matching one), and plush, smiling peas in a pod, all of which add to the carefully curated, but also somewhat chaotic, ambience. It’s a slightly different vibe than that of the connecting nightstand, which displays a resin tray of rings that Emma made during her quarantine crafting phase. Crystals and essential oils, also on the nightstand, are supposed to create a peaceful aura conducive to sleep. The container of Melatonin is also there, though, in case that doesn’t work. 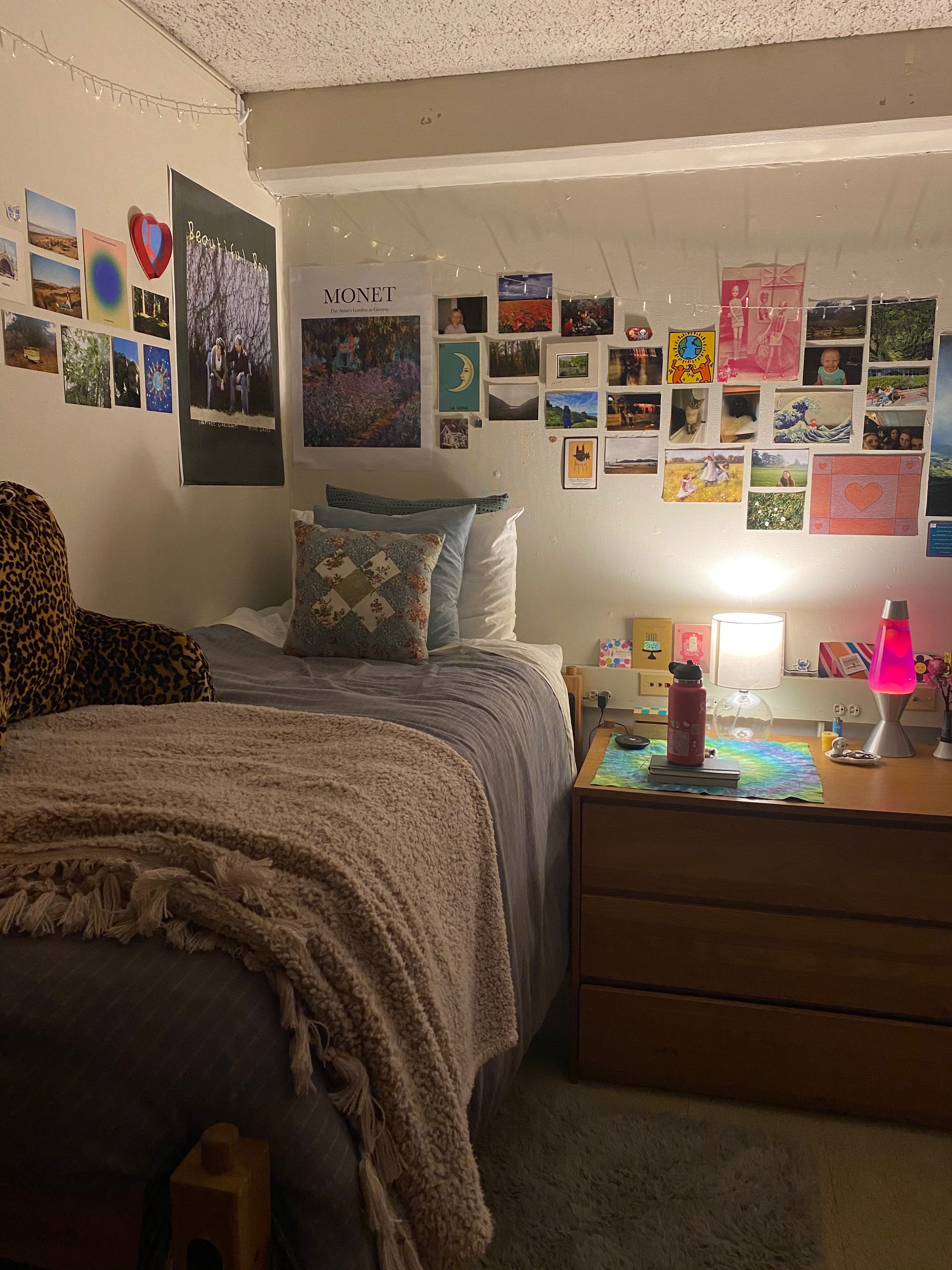 When Jordan first moved in, she was overwhelmed by the never-ending wall space on her side, and the task of filling it up appeared quite daunting. Over time, she’s collected an assortment of posters, photos, and art prints that she loves. Like Emma, she wanted her wall to celebrate things that evoke joy, especially since it’s all she has to look at during her online classes or when she’s sitting in bed. Jordan’s favorites include nods to two of her favorite movies, “Ponyo” and “Beautiful Boy,” in addition to some awesome thrift store finds, such as a mini disco ball and kitschy postcards. She too has displayed many film photographs taken from home of her friends, family, her cats, and concerts she used to attend (she’s particularly proud of the photo she managed to get of Childish Gambino at Outside Lands in 2019). There’s a special emphasis on nature across the wall, including plenty of photos of foggy beaches, flowers, and forests, since being outside makes her happy and she’s a proud San Franciscan who yearns for her native environment.

Jordan is thankful for the multiple light sources that stop her from being reliant on the harsh fluorescent lighting that came with the room. These light sources include string lights, two lamps, and her beloved, weirdly large lava lamp that’s almost always on. At her desk, she uses a calendar with vintage Italian travel posters to both stay organized and daydream about the days she can travel again. Additionally, Jordan uses an old tomato can to hold her pens and pencils because she enjoys the print on it and loves to cook. While on a mission of ultimate coziness, she’s loaded the bed with pillows, including a fuzzy leopard print back pillow which she adores, but which makes it that much harder to get up in the morning (she would stay in bed all day if she could).

As for the room’s common areas, Emma and Jordan have worked to cover the floor in rugs, both to section off the living space and to obscure the less-than-appealing linoleum. It also makes them feel like they’re having a picnic whenever they eat in the room. Both streamers and a birthday sign that still hangs across the windows from Jordan’s 19th birthday further add to the decor. During nights in, roommate bonding activities include taping up a sheet to the wall and using Jordan’s projector to watch “Black Mirror” and subpar yet addictive reality shows, as well as laying a towel out like a blanket and painting while they listen to music. Even though the Butts get a bad rep compared to Wesleyan’s newer buildings, Emma and Jordan are both grateful to have been able to temporarily call one of its many dorms home, and they believe that its imperfections only add to its charm.