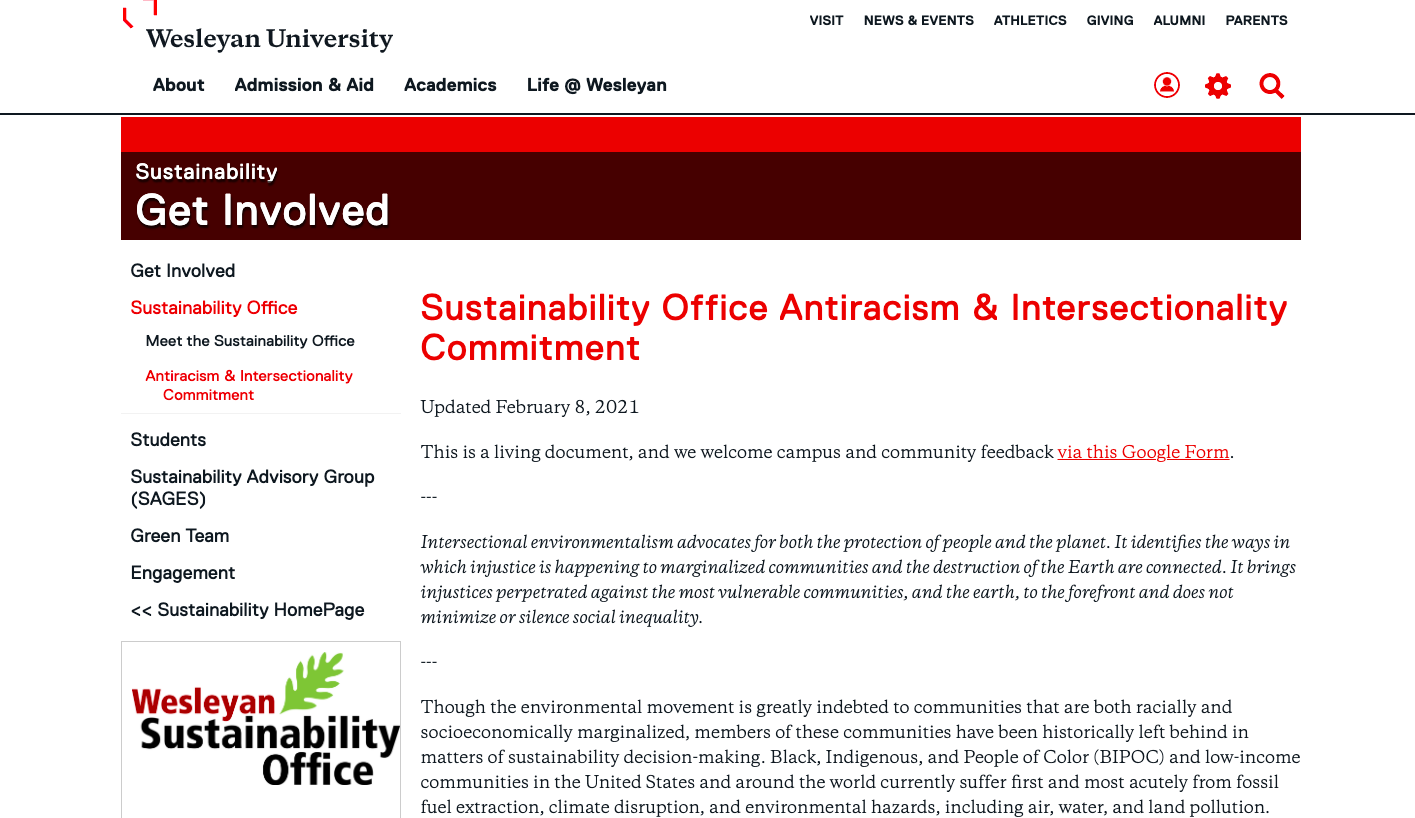 The Sustainability Office released their official Antiracism & Intersectionality Commitment on Monday, Feb. 8, outlining the ways in which the office hopes to bring anti-racism and intersectionality into their projects.

The document outlines four areas of commitment: 1) uplifting and prioritizing voices of marginalized groups in the sustainability movement; 2) acknowledging and collaborating with the BIPOC and FGLI voices within the University and Middletown; 3) educating the University community about the interdependence of racial and environmental justice; and 4) dismantling the current and historic barriers that exclude marginalized communities in sustainability and uphold white supremacy. The Sustainability Office started drafting the document during the summer, following the Black Lives Matter protests.

“The Sustainability Office has been attempting to integrate more intersectional environmentalism into the work that [they] do and the work that all of the interns in the office do over the past several years,” Sustainability Director Jen Kleindienst explained. “When George Floyd was killed, it was really—I’m ashamed to say it—but it was really a wake up call to a certain extent of ‘what we’ve been doing is just not enough, and we need to be figuring out comprehensively what can the Sustainability Office be doing to address the intersectionality of environmental issues with social issues, as well as just anti-racism in general, whether or not it intersects directly with environmental issue.’”

The commitment also outlines some of the Sustainability Office’s new policies, including an internal curriculum.

“There are also a fair number of things that we weren’t really doing at all, or we’re doing very little that we’re now stating that we want to try to do,” Kleindienst explained. “One of those that is being worked on as we speak is an internal curriculum for the Sustainability Office. ‘What are basic things that you really should know if you’re working in the Sustainability Office about intersectionality of environmental issues with social issues, and how does anti-racism fit into that work?’”

This internal curriculum is especially prevalent in the training of Eco Facilitators, students who work to provide the campus community with resources for following a sustainable lifestyle.

“In every single one of our classes, we just make sure to incorporate the things we say here. It’s a living document; it’s consistent, so we have to make sure we’re consistently upholding everything that’s in it,” Eco Facilitator Coordinator Chloe Odabashian ’23 explained. “We just have to make sure we have this in mind through every class we plan, every activity.”

The commitment began as a collaboration between Kleindienst and the summer Sustainability Office intern, Maren Westgard ’22.

“My first big project was to start the very first draft of the Sustainability Strategic Plan, which at the time was called the Sustainability Action Plan,” Westgard explained. “We were making a lot of changes from the last time we had done this. It was also really interesting because we started drafting that document, and we had quite a few things in there that related to environmental justice and anti-racism, but not as directly as we wanted to. It wasn’t the main focus because it was such a broad overarching document of so many things we wanted to have goals for.”

Over time, Westgard and Kleindienst shared the commitment with other members of the Sustainability Office so they could collaborate.

“As soon as we made that, we immediately began sharing it with other sustainability interns, sharing it with Eco-Facilitators, and even this week I’ve been getting messages that people are commenting and making little changes to it,” Westgard recounted.

While the commitment was still in its drafting stages during the fall semester, many of the practices were still implemented by the Sustainability Office.

“We did a semi-internal survey to ask current and former interns in the office, as well as students who have interacted with a little bit more depth, ‘What is the office doing right in terms of promoting anti-racism, promoting an inclusive environment, et cetera. Where are we failing? What ideas do you have to make things better?’” Kleindienst explained. “That was one of the goals that we had set out in the commitment, and I’m looking to repeat that again this spring. There’s already a fair number of things that were in progress and the commitment just made explicit: ‘This is something that we want to continue to do.’”

Both Kleindienst and Westgard emphasized that the commitment is a working document and that students can continue to leave feedback through a google form, which can also be found on the office’s website.

“The intention is for this to be constantly evolving and to have input for students whenever, because that’s what’s important, the way students are experiencing this, and not that it’s some unchangeable document,” Westgard said.

“But this, as with everything else, is a work in progress,” Kleindienst said. “We’re trying out different readings and activities and people to talk to, and we’re going to see what works and what doesn’t and continue to improve.”

“The goal of all of it, and the reason why it’s a commitment and not just a statement, is that we want this to be action-oriented,” Kleindienst said. “We don’t just want to say to the Wesleyan community ‘Look at us we’re thinking about anti-racism’ and have nothing to show for it. We really want to make this a concrete commitment to change and change in [the] short-term and the long-term.”