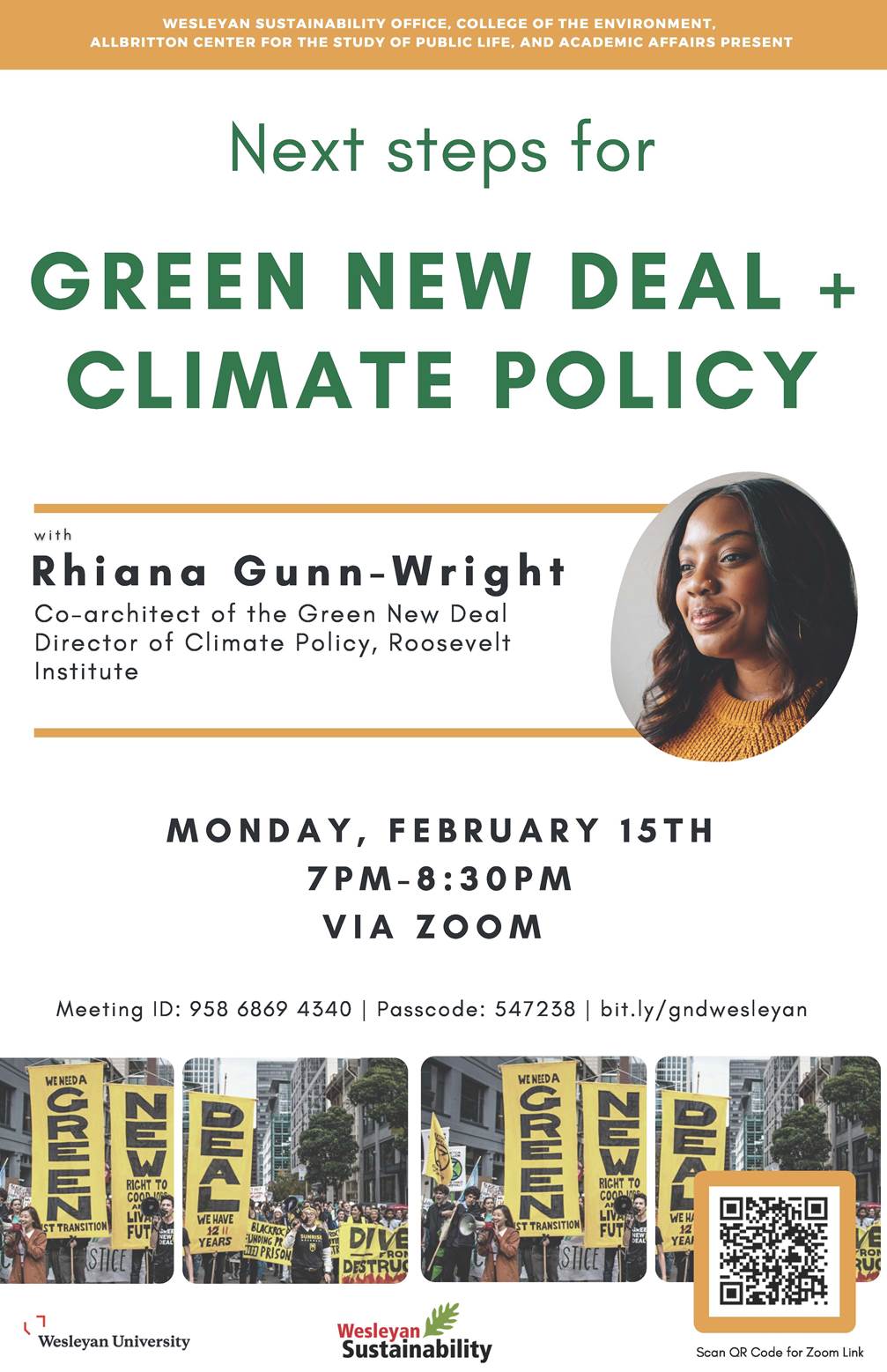 Co-architect of the Green New Deal Rhiana Gunn-Wright led a virtual interactive discussion about political organizing and the formation of the progressive climate proposal on Monday, Feb. 15. Gunn-Wright currently serves as the Roosevelt Institute’s Director of Climate Change Policy. Previously, she served as the Policy Director for the think tank New Consensus, where she was responsible for developing and promoting the Green New Deal.

At the University event, Gunn-Wright shared her experience working on the Green New Deal and gave advice to students looking to get involved in climate action work. The event was sponsored by the Sustainability Office, the College of the Environment, the Allbritton Center for the Study of Public Life, and Academic Affairs. The University’s Sustainability Director Jen Kleindienst noted that the event was part of the office’s anti-racism initiative.

“[It’s] part of wanting to do more to highlight BIPOC and bringing more voices of color to the Wesleyan campus, as well as supporting BIPOC who are working in these fields,” Kleindienst told The Argus.

The Green New Deal (H.R.-19) is a resolution introduced to the United States House of Representatives in February 2019 by Representative Alexandria Ocasio-Cortez (D-NY 14th District). The resolution calls for the federal government to confront the climate crisis in an intersectional and systematic way.

“It’s about the economy. It’s about climate. It’s about racial equality. It’s about justice,” Gunn-Wright said. “There’s no reality in which you can try to rapidly decarbonize and it doesn’t change your economy and it doesn’t upset the fossil fuel industry. Or it doesn’t have an affect on the racial distribution of wealth. We are in this system where all of those things overlap.”

“We were young people, largely of color, [and] Progressives,” Gunn-Wright said. “Often, the way that we treat the economy, particularly in D.C. and in policy circles, is that Conservatives are the only ones who understand how the economy works. [They said] ‘Progressives, you just want to tax and spend all of that,’ and we were also putting forward an economic analysis. So on a number of levels, it was new and jarring.”

Gunn-Wright also described the strengths of the Green New Deal that helped her and its other co-creators rise above adversity, such as support from the Sunrise Movement, a grassroots organization advocating for political action on climate change, and Justice Democrats, a political action organization working to elect working-class Americans to political office.

“The things that we did have were better organizing, we had some of the best organizers in the country, and Sunrise and Justice Democrats who had active bases and who, because they were younger, I think, less connected orgs [organizations], were willing to do things that maybe larger organizations who were more well connected, who had more power and access, might not be willing to do,” Gunn-Wright said.

Despite not receiving strong financial backing, the Green New Deal gained traction due to its dedicated supporters, Gunn-Wright explained.

“There’s different types of power,” Gunn-Wright said. “And what we didn’t have in money, we did have in, essentially, a sense of the world that other people were communicating and channels to move that and the ability to use the resources that we had, which was people.”

At the end of the event, Gunn-Wright offered advice to the attendees, encouraging them to look at the bigger picture.

“One of the biggest things that I really want to emphasize for you all is that one of the biggest advantages, if you can, that you have, and that you can cultivate, is living in reality,” Gunn-Wright said. “Looking at problems as they actually exist, not how you wish that they existed.”