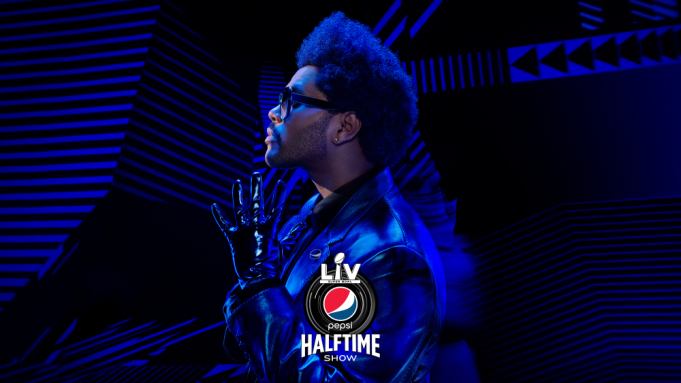 After a long and sweaty introduction courtesy of the Kansas City Chiefs and the Tampa Bay Buccaneers (yes, we in the Arts section had to look up the names of the teams), the field at Tampa’s Raymond James Stadium was cleared for the main event: The Weeknd’s halftime show. Fitting for these unusual times, The Weeknd delivered an offbeat performance that mixed traditional spectacle with gloomy undertones.

The show kicked off as The Weeknd stepped out of a sleek black and red convertible, framed by a brightly-lit Las Vegas backdrop and dressed in a glittering red suit jacket. The camera shifted to an angelic figure, who descended from above as a cloaked, robot-masked choir with glowing red eyes hummed an eerie chant. The bleachers split open, revealing The Weeknd once again, his arms outstretched as if conducting the choir around him.

Even while classic, grandiose halftime gestures like fireworks and flashing lights lit up behind the singer, this year felt different. Within the first few seconds of his opening song “Starboy,” he had already captured themes of isolation that have come to characterize the past COVID-stricken year, as the song, despite its catchiness, is a melancholic reflection on fame.

The Weeknd followed up “Starboy” with “The Hills,” its downbeat R&B production given a boost by crashing live drums and the backing of a choir. The Weeknd reportedly spent $7 million of his own money on top of the NFL’s own funding to enhance the show, and between the backing band and fireworks array, this could be both seen and heard.

After “The Hills,” The Weeknd left the stage to transition to his 2014 hit “I Can’t Feel My Face.” Seizing control of a close-up camera, he moved frantically through a brightly-lit maze, dizzying viewers. A swarm of dancers in identical clothing to The Weeknd joined him in the illuminated hallway as he broke into the chorus. Lost in the disorienting sea of dancers, the artist alluded to his own struggle with navigating the shallow world of fame.

The background dancers’ faces were bandaged, a clear nod to the star’s public appearances in which his face has been either bloodied, bruised, or “recovering” from makeup made to look like he had undergone plastic surgery. In a combination of costume and pandemic safety precautions, the white bandages also camouflaged each dancer’s protective face masks.

“The significance of the head bandages is reflecting on the absurd culture of Hollywood celebrity and people manipulating themselves for superficial reasons to please and be validated,” The Weeknd explained in an interview with Esquire.

The impact of the pandemic on the halftime show could also be felt in the lack of guest performers. While previous headliners tended to bring on one, if not several famous guests, The Weeknd remained the game’s sole performer. This was possibly due to COVID-related travel restrictions, but was incorporated into the performance, with its solitary focus on the headlining singer.

“There wasn’t any room to fit [guests] in the narrative and the story I was telling in the performance,” The Weeknd told CNN prior to the show.

The first Canadian performer to headline the Super Bowl halftime show, The Weeknd was recognized by his hometown of Toronto, as the city’s mayor, John Tory declared February 7 “The Weeknd Day.”

Resurfacing onto the stage, The Weeknd performed “I Feel It Coming,” his recent single “Save Your Tears” with an acoustic guitar backup, and “Fifty Shades of Gray” soundtrack hit “Earned It” with a dramatic string accompaniment.

The bandage-faced dancers flooded the field as “House of Balloons / Glass Table Girls,” a song from The Weeknd’s 2011 debut mixtape played, before, for the grand finale, he launched into his most recent hit, “Blinding Lights.” With swooping shots of a field full of doppelgängers and a massive fireworks display, the upbeat performance made for a fittingly dramatic closer.

Looming over the show were the lingering issues within the NFL itself. In 2019, multiple celebrities publicly boycotted the Super Bowl in solidarity with former San Francisco 49ers quarterback Colin Kaepernick, who argued that his exile from the league was prompted by his taking a knee during the national anthem in protest of police brutality and in support of the Black Lives Matter Movement. Among these celebrities were Rihanna and Cardi B, who both publicly stated they turned down offers to perform at the halftime show in support of Kaepernick.

The NFL has made public gestures towards reform, such as a 2019 partnership with Jay-Z’s Roc Nation with the stated aim of advancing social justice causes, as well as advising on the Super Bowl halftime show. But Kaepernick remains unsigned, the Washington Football Team only changed their name from a racial slur for Native Americans this past season, and one of the very teams in the Super Bowl, the Kansas City Chiefs, brands itself with Native American imagery.

The Weeknd, who is the halftime show’s first Black headliner since the Kaepernick controversy, did not include explicitly political elements in his performance, focusing on the personal and the spectacular. However, he has been a public supporter of Black Lives Matter, and last summer, split a half-million dollar donation between Black Lives Matter, National Bailout, and Kaepernick’s Know Your Rights Camp.

Reactions to The Weeknd’s halftime show appear to have been mixed, judging from both social media and reviews published after the fact. But between the impact of the pandemic and The Weeknd’s own musical journey from gloomy alt-R&B to upbeat dance-pop, he was able to deliver a multifaceted show appropriate for the moment.

Olivia Sharenow can be reached at osharenow@wesleyan.edu