Tasty Treats From Your Friends at Feats

I don’t know about you, but one thing I really enjoyed about break was being back in my own kitchen. Being in the presence of my stand mixer and many spatulas, spoons, and whisks just brings me an incredibly comforting feeling.

Now that we are getting back to campus I probably won’t be cooking as much as I usually do, just because I live in the Butterfields and it can be a bit cumbersome to haul all of my ingredients all the way to the kitchen. However, I certainly don’t want to abandon cooking altogether, and thus set out to ask some other people if they had any ideas for easy, college-friendly recipes. I ended up with a great mix of salty and sweet, so prepare to have some cravings while you read these tasty suggestions from students.

You’ll notice these following recipes do not have strict measurements for ingredients. That’s because college cooks are notoriously instinctive, and these chefs encourage you to cook however you so choose!

I’m not going to lie, cooking with chicken terrifies me. I think after years of watching Gordon Ramsay’s cooking shows, the concept of him popping up behind me and screaming “IT’S RAW!” is always at the back of my mind whenever I’m working with meat. This recipe for breaded chicken from Abigail Weiss has got me thinking of giving cooking some chicken a go when I get back, though!

“It’s super easy—cut a breast into strips or get strips, cover them in flour, then egg, and then breadcrumbs, season with whatever herbs you like or just salt, and bake in the oven with some butter or on a pan,” Weiss said. “It’s really easy to customize with whatever herbs, spices, or sauces you want. I literally just made it with soy sauce tonight and it was great.”

For a bit of a twist, Weiss suggests using a potato chip crust.

“It’s the same concept: just use crushed potato chips instead of bread crumbs,” she said. “Just put a little melted butter on top so the chips don’t burn.”

I can tell that Jacques knows what he’s doing by the omittance of any hard set measurements in his recipe for roasted potatoes. It does take about an hour in the oven, though, so prepare to be patient!

“Cut 3–4 potatoes into small cubes, toss in a generous splash of oil, salt, pepper, some spices and roast in an oven at 375 degrees for an hour/an hour and a bit,” Jacques suggests. “Sauté onions and peppers for the time it takes to finish the potatoes, add some tomato paste when the veggies soften as well some other spices if you feel fancy. Serve on its own, with chicken or my favourite, sausages.”

I’m sure for the vegetarians and vegans out there you could also try putting in some tofu or seitan, but I would be all for eating the potatoes plain. With that combination of spices and a crispy outside, I think they could definitely shine all on their own.

This recipe is best when made with a group of friends or family, making it an ideal bonding activity with your family unit during the quarantine. To begin making the chocolate pretzel treats, you will first need to preheat an oven to approximately 150 degrees Celsius. While it is heating up, fill a tray full of pretzels. I would recommend lining the tray with parchment paper first just for easier clean-up, but it is not necessary. Then, unwrap a whole bunch of Hershey’s kisses and carefully balance one on top of each pretzel. Put the kisses and pretzels into the oven until the chocolate kisses are just soft. This can take some trial and error, but usually two and a half minutes does the trick. Once they are melty enough, take out the pan and gather your family unit to help you quickly push in M&Ms to each of the kisses. This step has to be done as quickly as possible because the chocolate will harden quickly and then you won’t be able to push the M&Ms in!

Some advice from Emma: “Don’t touch the pan!” You’d think this wouldn’t be an issue, but she tells me that time and time again her family members forget that the pan has just come out of the oven and is scorching hot.

Once you finish pushing in the M&Ms, put the whole tray into the freezer for around 20 minutes or until all of the chocolate has hardened. I made these for Halloween a few months ago and only used yellow and orange M&M’s for a spooky color scheme, but you can use whatever colors you like! 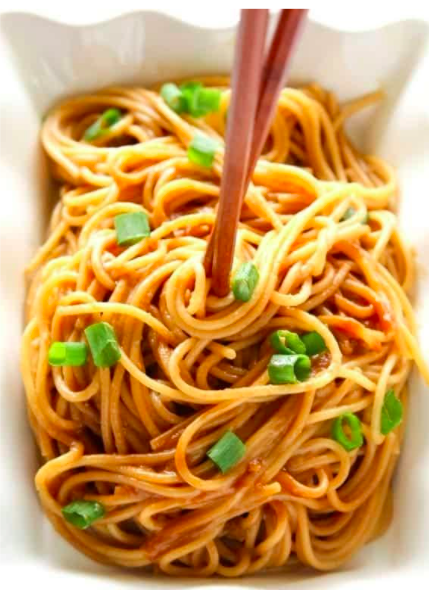 This simple and beautiful recipe from Joanna Gerber is likely not going to require a trip to the grocery store. The ingredients are all items that you probably already have lying around: spaghetti, sesame oil, green onions, ginger, peanut butter, soy sauce, hot water, cider vinegar, sugar, and red pepper flakes. As an added bonus, these noodles are completely vegan!

“These peanut noodles are super super good!” Joanna said. “Would recommend sautéing some carrots, onion, broccoli, maybe chicken or tofu if you want, and mixing it in!”

The full recipe can be found here.

Not only does this recipe for chicken and spinach pasta from Brianna look incredibly delicious and full of color, it is actually a lot simpler than it seems at first. She recommends using Barilla’s ready pasta (which can be microwaved in just 60 seconds) to save on some washing up, but you could use any pasta you like.

The first step is to microwave your pasta. Next, open up the can of chicken and pour out the water inside, like you would with a can of tuna. After that, sauté the spinach, baby bell peppers, and onion in a pan with whatever seasonings you like. Brianna uses garlic powder, minced garlic, salt, and lemon juice.

The vegetables can be substituted or added to, but Johnson always tries to add in as much color as she can. She also recommends shopping at It’s Only Natural on Main Street where she gets all of her produce, like the baby bell peppers which are the perfect size for a single dish.

“It’s really helpful for small meals like this when you don’t want to waste peppers because they spoil quickly,” explained Johnson.

When it comes to the chicken, she recommends adding in some dried chili powder, black pepper, garlic, basil, and parsley. To be honest, I am quite envious of her spice collection.

After that, it’s as simple as just mixing everything together. As a garnish, you can add some minced scallions on top for even more color.

“This was one of my quarantine favorites, and you do need some rice, but outside of that it’s super easy,” Kauffman shared. “It’s called egg-rice, and it’s a really great breakfast, or generally just a filling, simple meal.”

To start, you’ll need cooked rice. This can be either freshly made in a rice cooker or some leftover rice that’s been microwaved until it’s hot. Then you just beat however many eggs you want to eat in a bowl and add some soy sauce. Once that has been mixed, you pour everything onto the hot rice. The heat from the rice cooks the eggs, but they’re still a little bit loose.

“There aren’t really measurements; it’s sort of an approximate recipe,” Kauffman said. “But a good place to start would be two eggs, a medium bowl of rice, and a generous splash of soy sauce.”

One of my favorite things about Wesleyan is the extensive amount of food options we have available on campus and the amazing restaurants in Middletown, but sometimes it’s nice to be able to throw a whole meal together yourself. Let me know if you make any of these recipes! I’m heading off to check what ingredients I have and what I still need to get from Weshop…

Sarah Timbie can be reached at stimbie@wesleyan.edu