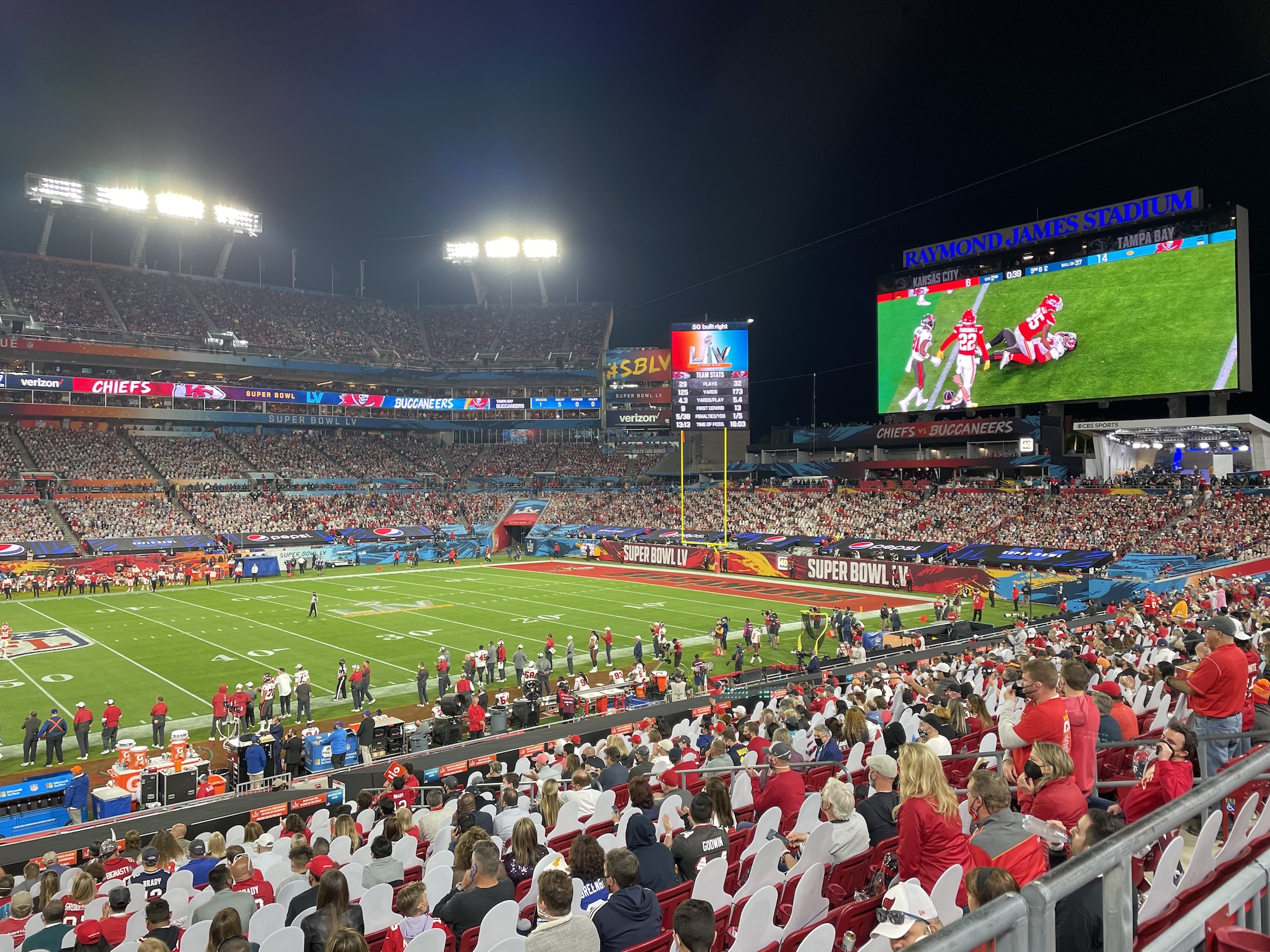 Twenty-five-thousand masked sports fans mingled alongside 30,000 cardboard cutouts of supporters at Super Bowl LV in Tampa, Florida on Feb. 7. In the crowd was Jess Van Valkenburg ’23, but she wasn’t attending as a fan. Rather, she was there as Operations Support for CBS, responsible for helping with the behind-the-scenes work of the telecast that often goes under-appreciated.

“Any place where CBS people would be, we had to set up and maintain throughout the entire show,” Van Valkenburg said. “It’s nuts how much goes into a three-hour football game. I was there for 27 days; some people were there for around 40 days.”

Van Valkenburg’s work leading up to the event included organizational tasks, as she assisted higher-ups who were running the program.

“The easiest way that I can describe it is…whatever the super important people want and need, I take care of,” Van Valkenburg said. “Stocking fridges, making sure that the coffee station is stocked, taking out trash, organizing and handing out credentials, organizing and handing out Super Bowl gear to the crew…I went on a lot of errands. When you’re taking care of that many people, you need to go shopping a lot. I was in Target like every single day buying one thing or another.”

Van Valkenburg started her journey to Super Bowl LV when she reached out to a family friend two summers ago in order to find a summer job. He was able to offer her a position helping out with golf tournaments, and from there, she found herself meeting new people and making more connections. This past summer, when the pandemic was surging and Super Bowl staffers were uncomfortable working due to fear of the virus, she was able to step in and help out.

“A lot of people needed Operations Support people, and I jumped on the opportunity to work,” Van Valkenburg said.

This allowed her to work with new production managers, which eventually led to her being asked to work at the Super Bowl. An avid lover of sports and a softball player in high school, she had left sports behind when she came to Wesleyan in order to focus on academics and other activities. Working for CBS was a welcome return to the sports world.

“It’s funny how it all worked out, because I stopped playing sports, transitioned to college, and then this job came along and allowed me to incorporate sports into my life in a different way,” Van Valkenburg said. “Getting paid to do what you love and to do something that you really enjoy is super special, and I’ve definitely found that with this job.”

As we’ve often heard repeated throughout the pandemic, this past year has been unlike any other. Van Valkenburg explained that this is also the case in the world of the Super Bowl, which had a historic year for a number of reasons, from Tom Brady winning more rings than any franchise to the necessary accommodations for COVID-19. This was also the first year that a female referee, Sarah Thomas, was officiating in a Super Bowl, and her presence was an important part of Van Valkenburg’s experience.

“Us women are pretty awesome, so it was pretty cool to get to see her rock it on the field as well,” Van Valkenburg said.

As exciting as it was to be working on the Super Bowl, Van Valkenburg noted that there were definitely some difficult and stressful parts to the job as well.

“Tampa Bay was a really cool place to be in, but there’s crazy traffic down there, and the people drive like crazy,” Van Valkenburg said. “There was one morning about a week before the Super Bowl where the stadium decided they were going to give out free Bucs t-shirts and my entire crew got stuck in three hours of traffic. It’s a five-minute drive from the hotel to the stadium and it took three hours to get there.”

Van Valkenburg also noted that there was a calculated risk associated with going to the Super Bowl during a pandemic, with Florida’s rate of positivity for COVID-19 tests around 9 percent as of Feb. 3. However, she also emphasized the safety precautions that CBS undertook in order to ensure that the crew would stay healthy.

“They were very, very thorough,” she said. “We were sent a take-home COVID-19 PCR test that we had to take within 48 hours of traveling. As soon as [the crew and I] arrived in Tampa, we got another PCR test done the next day. After that second test came back negative, we were allowed to go on site. And then after we got on-site, we were all put on the 4-day testing [schedule]. We also had to fill out this questionnaire every day asking us if we had symptoms or if we were in contact with anyone with symptoms or who had tested positive. We were temp-checked by nurses that were on site every day; we weren’t even allowed in if we didn’t have a temperature below 100 degrees.”

On-site, employees were required to wear masks and stay six feet apart at all times. Fans were installed in order to circulate air continuously. When eating, meals were entirely grab-and-go. When she wasn’t on-site, Van Valkenburg was required to remain in her hotel room. All of her meals had to be delivered or ordered from room service. Even grocery shopping had to be done through Instacart.

“There was no interaction other than what you had to do to get your job done,” Van Valkenburg said.

Van Valkenburg recounted that she received almost 10 negative tests while in Tampa. Now that she’s home, she has one last PCR test to take before she can return to campus to start the mandatory two-week quarantine for all students. But this experience will stay with her for a long time.

“It was one of those experiences that you almost can’t even comprehend while it’s happening,” Van Valkenburg said. “That feeling of, ‘Wow, I’m so lucky. I’m healthy. I am okay.’ I honestly started crying. I may never get to experience this again.”