Underdogs and Hope at the European Championship Qualifiers 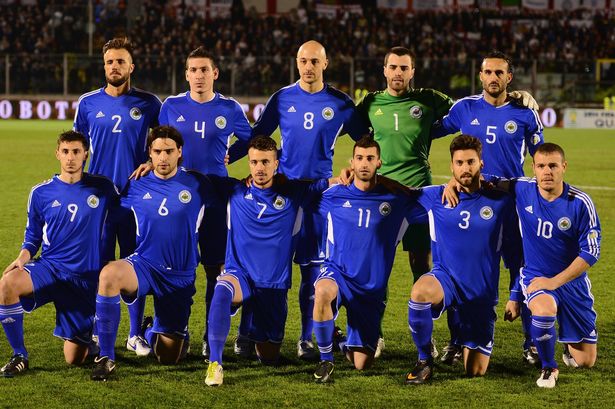 At the end of his fabulous book, “Thirty-One Nil,” soccer journalist James Montague interviews Giampaulo Mazza, the former coach of the San Marino national soccer team. San Marino has never won an official competitive game. Most of the time it gets beaten by seven or eight goals. It’s not fair, really; only a little over 30,000 people live there, tucked away in a beautiful country surrounded entirely by Italy. Everywhere the national team goes, though, crowds take to them, falling in love with who they are and what they represent.

“What is it in human nature that makes us appreciate a team like San Marino in a different way?” Montague asks Mazza.

Why do we so admire underdog stories?

“Everyone who is normal, sees themselves in us,” Mazza replies.

2020 has been a brutal year. The first half of 2021 probably won’t be much better. The recent spike in COVID-19 cases here and elsewhere seem to have added another level of suffering and pain. Even for those of us lucky enough to have families and friends who are for the moment healthy, the exhaustion and listlessness can be hard to escape. But people are meaning-makers. We grasp onto what we can, even if it’s just a fleeting interaction or a beautiful day. Some power through hard times with their favorite albums blasting in their ears. Some put on an inspiring movie or a familiar sitcom. In the last couple weeks, many have found hope in electoral politics and the promise of better governance come January, or the positive news about potential vaccines in the spring and summer.

Last week, I found hope in something far less consequential than elections or vaccines, but also something far simpler: European Championship qualifiers.

This coming summer, the best national teams in Europe will meet and play in what is probably the second most prestigious soccer competition in the world after the World Cup. Like the World Cup and the Olympics, the “Euros” are played every four years. The tournament had been scheduled for last summer, but COVID-19 made that impossible. There is optimism it can go ahead this summer, maybe even with some fans in the stands. Organizers stubbornly insist upon calling it Euro 2020, hoping apparently to singlehandedly convince the world that 2020 is still marketable. They must have already made the t-shirts.

To play in the Euros, national teams across the continent compete in a lengthy qualification process. Almost everything about international soccer in recent months has gone poorly. There has been, in short, everything that is bad about 2020: sickness, greed, COVID-19 carelessness, emotional emptiness. That is, until last Thursday.

Going into the week, four spots in Euro 2020 were still up for grabs. Eight teams knew they just needed to win their last game to qualify. Scotland was one of these nations. The team hadn’t qualified for a major tournament in more than 20 years. It took the lead midway through its match against Serbia, then seemed to blow-it by allowing a last-minute goal. The game went to extra-time and then penalty kicks. The Scots, eventually, dramatically pulled it out, punching their ticket to the Euros.

There was a charming moment right at the end of the game. Scotland’s goalkeeper, David Marshall, saved a penalty to win the game and become a hero forever. He leapt up, but then paused, looking pleadingly at the referee. He stood there, arms out, for a long, desperate second. This was emotional self-protection. He didn’t want to celebrate only to have the shot retaken a minute later if, hypothetically, Marshall jumped off the goal line to make the save earlier than is allowed. It meant too much to him to risk false hope. The ref blew the whistle, and that was that. All was okay.

Empty stadiums on TV can make even the best sporting accomplishments feel cold and distant, even meaningless. But everyone can recognize earnest emotion when they see it. When players jubilantly hug, overwhelmed and moved to tears, then struggle for words in post-game interviews, it is hard not to get swept up in the moment. The drama of sports can remove a viewer from the tedium of daily life, especially during a pandemic. Scotland, one of soccer’s ancestral homes, has been waiting for so long. The joy, the release, has been earned. Sports are about moments, but also about generations. It’s a reminder that as long as these months have felt, there really was life before COVID-19 and there will be life after it.

North Macedonia, meanwhile, qualified for their first major international tournament ever by beating Georgia. A 37-year-old, Goran Pandev, scored the winning goal. He played his first international game at 18, a lifetime ago. North Macedonia is a relatively young country, occupying a politically and historically complicated place in the world. The government has been in the process of trying to join the EU for 15 years and hit another roadblock just this week. But the people have a soccer team which will share the stage with Europe’s elite this summer, for all the world to see, because they belong.

In sports, of course, where there are winners there are losers. On Thursday, Northern Ireland lost to Slovakia. They lost in similar fashion in the last round of World Cup qualification. So close, but not quite good—or lucky—enough. This is probably the end for a generation of Northern Irish players. New blood will have to come through to replace an aging roster. For all the competitive ethos, sometimes sports can remind us that winning isn’t everything. Sometimes people can become more attached to a team that loses than one that wins, if the struggle and pain feels shared. It’s about the story, the relationship.

On Saturday, San Marino hosted Gibraltar and drew 0-0. They played well, nearly well enough to earn their first win ever. I always watch San Marino games, just in case. I want to “be there” when it happens, when a stray bounce of the ball changes a 0-0 into a 1-0. I want to see the look on the players’ faces when they win for their nation, their people, for the very first time. Whenever I watch, I always believe it’ll happen. Belief is a gift.

Hope resides in unexpected places. Even in hard times and perhaps especially in hard times, how can you not get romantic about sports, about San Marino and Scotland and North Macedonia?