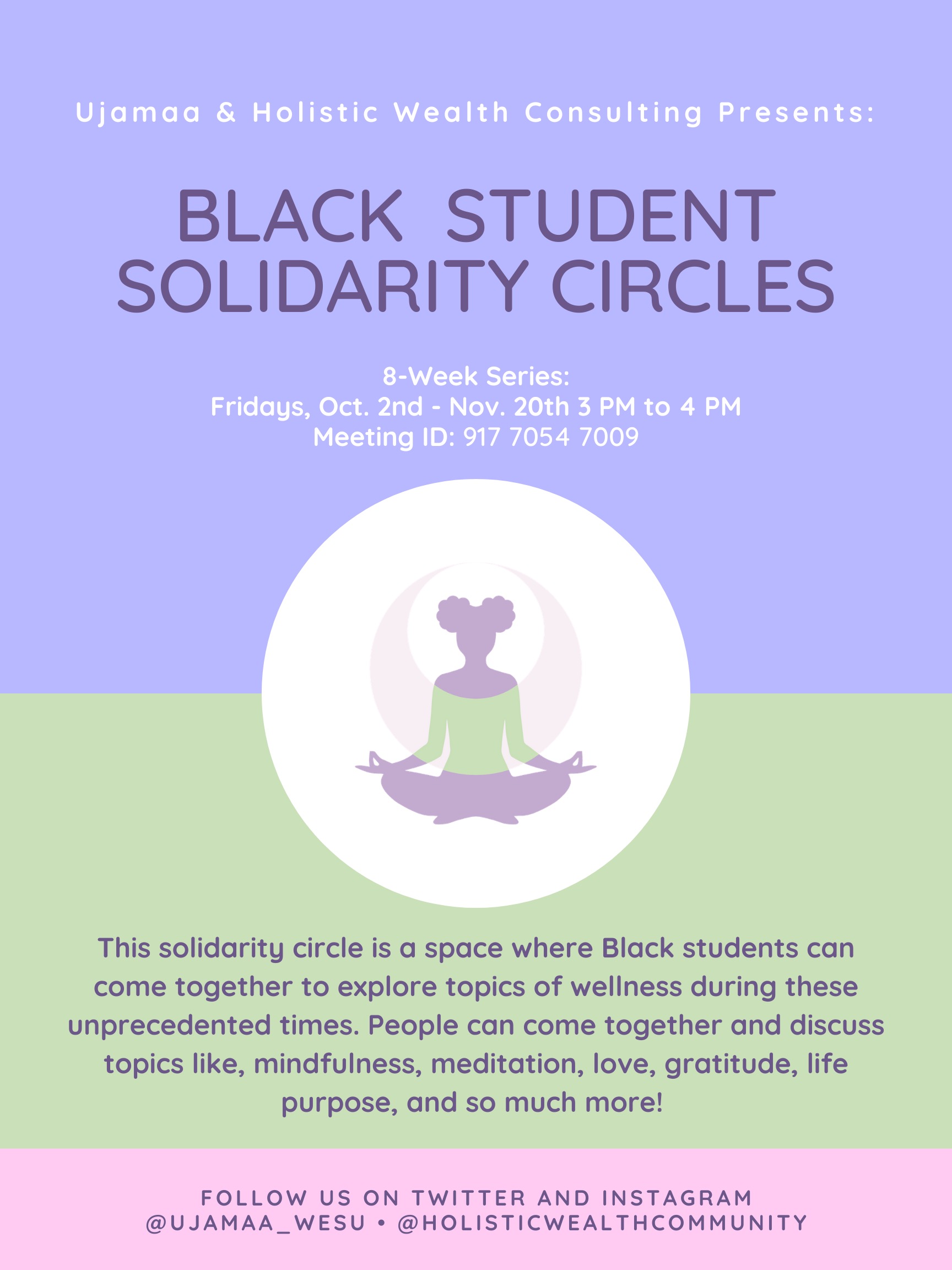 During a semester that has posed unique challenges to students, mental health and community support spaces have become more important than ever. Every Friday afternoon from 3 to 4 p.m. EST, a group of Black students gathers over Zoom to participate in the Solidarity Circles workshop. This weekly program is facilitated by Ujamaa, the University’s Black Student Union, and is designed to serve as a space for Black students to practice mindfulness and navigate the many stressors that come with attending a predominantly white institution.

Created by Founder of Holistic Wealth LLC and Patricelli Fellow Inayah Bashir ’20, the eight-week long initiative began on Friday, Oct. 2. Bashir, with the help of Ujamaa Communications Liaison and Financial Manager Alice Swan ’21 and Former Ujamaa Board Member Lexi Cummings ’21, personalized a curriculum that would best cater to the University’s Black student community.

The Ujamaa Solidarity Circle program includes weekly discussion topics such as conceptions of mental illness and mental health in Black communities, love languages, and definitions of gender within community spaces. Conversations incorporate mindfulness, spirituality, and meditation techniques. Bashir hopes that the workshop can provide a community space centered around mental health and wellbeing.

“Ultimately I think the solidarity circles are just community healing spaces, and I think that’s something that as a culture we currently lack,” Bashir said. “My time at Wesleyan taught me a lot about mental health, not only from the constant push that I think the University does with mental health stuff, but also the students themselves actually knowing how to articulate what they’re going through…. Recognizing how much the Wesleyan community did for me as far as understanding my mental health, I want to really encourage that and in other spaces as well.”

Every workshop begins with music as participants enter the Zoom room. After brief introductions, attendees engage in a guided meditation session alongside breathing exercises. After the meditation, the participants are given a prompt, which references the week’s theme, and are asked to journal their thoughts. Participants then gather in groups to debrief the process and their reflections, segueing into a conversation about holistic mindfulness processes that can be maintained throughout the week. Bashir explained that these exercises can vary depending on the individual.

“What I love about it is I think a lot of it can just be a personal reflection as well,” Bashir said. “You can log onto the session, and you don’t have to turn your camera on. The most we’ll ask you to participate is like, ‘Hey, like say your name, your pronouns,’ and then for the rest of the class, you could just be writing to the prompts, reflecting on the prompts, and participating as much, or as little as you want to.”

However, Bashir acknowledges that the Zoom platform has its limitations.

“We know that Zoom fatigue is real, and we’ve all been on zoom all week, so we really want to make [the] space not really a Zoom space,” Bashir said. “We try to give people a lot of time to do activities and not just look at the screen.”

Even though Zoom poses challenges, the overall response to the Solidarity Circles workshop has been positive. Regular attendee and current Wesleyan graduate student Simone John-Vanderpool ’20 mentioned that she has had a positive experience with the weekly sessions.

“I think these workshops have been majorly successful as far as establishing a time and space for meaningful wellness practice,” John-Vanderpool wrote in an email to The Argus. “They allow me to check in with myself spiritually, physically, emotionally etc. and provide a nurturing environment where I can share reflections on growth as well as learn more about different wellness practices and techniques that may be useful. With learning these new techniques, I feel that the space also gives me time to think about and customize a wellness routine that works for me, and does so in a way that is also conscious of some of the unique challenges that I face as a Black person living in this country.”

“From my perspective, it seems that we all generally value the time and the space created by the solidarity circles,” John-Vanderpool wrote. “In all of the sessions that I have attended, the atmosphere has just been refreshingly affirming, but simultaneously peaceful and productive. I think we all get a lot of it, whether it be a 20 minute meditation or a new insight into how we relate to others.”

While Ujamaa did not create the program, its student leaders are involved in how it is translated and personalized to the University community.

“To the extent that Ujamaa works with Holistic Wealth, it’s usually relaying the critique of each session, debriefing, improvements that we can make for next time, promotions, going through the timeline of themes that we’re going to cover for each week, stuff like that,” Swan said.

Although Ujamaa helps reflect on each session, Swan emphasized that Bashir has been the driving force behind creating these weekly healing spaces.

“Inayah [Bashir] is like a one-woman show in the sense that she orchestrates each session,” Swan said.

“There was a Black Woman Solidarity Circle during the summer, and I didn’t know the other girls at all, but I feel like I really got to know them through the Solidarity Circles,” Swan said. “I wanted to build that community at Wesleyan too, because I know a lot of freshmen have been feeling estranged from their classmates because they can’t gather in the same way that they’re used to.”

Cummings echoed Swan’s sentiments, further underscoring the need for a mental health organization on campus as students transitioned from the summer.

“I wanted to contribute and help out, so I reached out to Alice over the summer [about] starting a sort of mental health organization, like whether it’s a club, whether it’s a workshop, if we do it through Ujamaa or not, just having some sort of support for Black students at Wesleyan, and she was really open to the idea,” Cummings said.

In practice, Swan believes that the Solidarity Circles have been successful, and she shared that she is excited for the program to expand and develop in coming semesters.

“I think we would like for it to grow like some more, just because I think more people would benefit from it,” Swan said. “But the space as it is, is really conducive to growth, and the response so far has been really nice.”

Moving forward, Cummings hopes for the continuing of similar BIPOC community mindfulness programs beyond this semester and the eight-week time period in which Solidarity Circles usually operate. Cummings expressed that she hopes that future iterations will include more administrative support to make the group meetings more accessible.

“I would definitely love to see something more permanent on Wesleyan’s campus, and perhaps getting the administration involved so that this isn’t just something that is student run,” Cummings said. “It’s something that’s actually reflected within the Wesleyan community, because I think that sometimes, some of the problems that we have with everything being remote is that people just aren’t aware that this is going on. So I think in order to actually make it more accessible, we need to have more administrative support.”

Even without administrative support, Bashir noted the significance of having the Solidarity Circles workshop as a means for students to seek mental or emotional support in a community setting.

“It’s sometimes a bit harder to identify when you’re emotionally or mentally in an ill state, but we want to help people be able to identify that, but also to build their own traditions and practices that work for them,” Bashir said. “We do think that therapy is important. Therapy is necessary, but we also want people to realize that community healing is possible.… It’s knowing when you need to reach out for help and when you can reach out to your community and when we can reach out to yourself.”