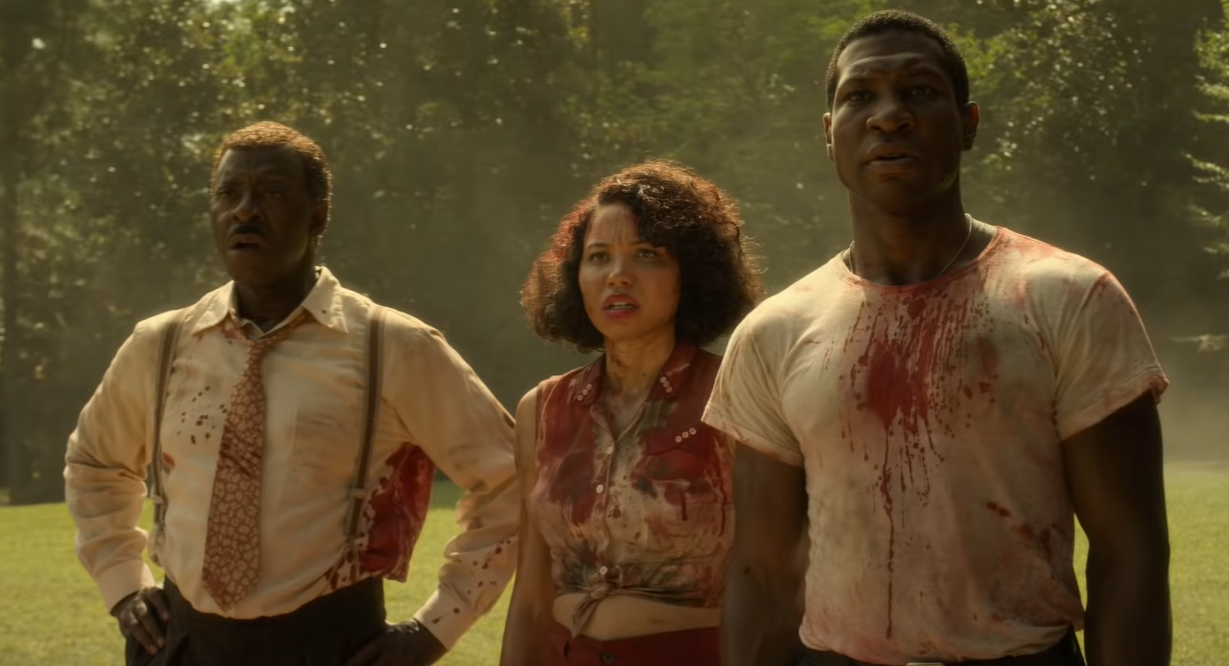 In the seventh episode of the television series “Lovecraft Country,” a distraught woman struggles to regain her bearings. Somewhere lost in the cosmos, Hippolyta (Aunjanue Ellis) fruitlessly searches her surroundings after a portal whisks her away to an unknown land. The empty white walls offer her no solace or clues as to where she is, nor does the poised, afro-wearing woman she encounters. The woman, Seraphina, demands Hippolyta name herself. At first Hippolyta balks at this, unsure as to how to respond. When Seraphina once more prompts her to name herself, something clicks.

“I want to be dancing on stage in Paris with Josephine Baker,” Hippolyta declares, and it is instantly so.

Her words are a force more powerful than magic, transporting and transforming her from the far away planet to front and center on a Parisian stage, dancing next to none other than Josephine Baker herself. There is an awe Hippolyta experiences almost to the point of disbelief that her own words could contain such imminent power. She marvels at her situation, awkwardly attempting to keep in time with the other dancers while simultaneously star-struck by Josephine Baker.

The performance ends and the dancers walk off stage, eyes rolling at the new American amateur. As they scoff at Hippolyta’s perceived naivety and ignorance, the irony is lost on them that Hippolyta has actually created the reality they are experiencing. Hippolyta has unknowingly manipulated the cosmos around her by unlocking her inner cosmic brilliance. She embraces her newfound power, committing to her new role as a dancer alongside Josephine Baker. Hippolyta, a vision of brilliance from the very first episode, comes to a sense of self-awareness. On earth, she allowed the titles society branded her to limit her: Black, female, mother, wife. But when has she ever taken the time to define herself, to let the world know who she was, to show them the brilliance she’d been gifted with?

“I am Hippolyta,” she asserts.

It’s a naming of the self as much as it is a rebirth. Shedding the racist cloak of labels, she steps into herself fully, mapping the very cosmos in her name.

This journey from oppression to reclaimed power is one that many Black characters undergo in “Lovecraft Country.” Created by “Underground” television writer Misha Green, and produced by filmmakers Jordan Peele and J.J. Abrahams, “Lovecraft Country,” takes Lovecraftian mythos and repurposes it to bring the racial horrors of America’s history to life.

American writer H.P. Lovecraft is best known for his works of horror literature as well as his racist rhetoric, his grotesque and hairy beasts not nearly as scary as his intense hatred. “Lovecraft Country” instead centers around Atticus ‘Tic’ Freeman (Jonathan Majors), as a quest to find his father morphs into a race to unlock the secrets of his family’s magical heritage. Accompanied by his childhood friend Letitia Wright (Jurnee Smollett) and later his distant father Montrose (Michael Kenneth Williams), the three venture across the 1950’s American South in search of information about the Freeman family’s past. While ordinarily having a magical lineage might be cause to celebrate, the Freemans knows that this is far from the truth; magic brings a slew of problems into their lives, including the unwanted attention of an ancient white supremacist cult called the Sons of Adam. Soon Atticus and his family find their lives turned upside down as family secrets unlock a brand new type of racial horrors into their lives in the form of Lovecraftian beasts, wicked spells and curses.

Yet magic doesn’t just serve as a source of terrorizing the Freeman family and friends; it’s also transformative. With magic, “Lovecraft Country” takes the very real racism and oppression of 1950’s America and injects it with horror, crafting monsters and nightmares that seemingly reflect the ongoing, systemic oppression faced by Black Americans. The members of the Freeman family aren’t the victims of these Lovecraftian beasts as much as they are their enemies. These monsters give Tic and his family permission to “name themselves” transforming into powerful forces to be reckoned with.

While it’s the magic that gives the Freeman family their supernatural abilities, any viewer can see the formidable power residing within the family from day one. “Lovecraft County” may paint a surreal world in which potions that turn a Black woman into a white woman, but it’s these very acts of the impossible that ground the television show in stark reality. In the middle of the show’s first season, it’s revealed that Tic’s younger cousin Dee (Jada Harris) is friends with a young Emmett Till, a surprise that reminds viewers that the beasts and monsters observed in “Lovecraft Country” aren’t as fictional as we’d like to believe. It would seem for Black Americans, monsters lurk at every corner in American society, though in our world their forms may be different or even disguised.

As we witness Dee grapple with the untimely and brutal murder of her friend, she is stalked by two fantastical racial horrors: Topsy and Bopsy, Black child characters originally from Harriet Beecher Stowe’s novel “Uncle Tom’s Cabin.” These two represent the destructive power of magic in the hands of white supremacists. Created by a wretched curse cast by racist cops, they chase after Dee. The two phantoms stand as the stark contrast of Dee, yet also serve as everything white people want to reduce Dee to be: cake-walking, disgusting stereotypes.

Throughout “Lovecraft Country,” Black women must confront the horrifying monsters of Blackness that exist in the white imagination. When talking to Josephine Baker, Hippolyta lays out the sharp realization of this fact clearly:

“All those years I thought I had everything I ever wanted, only to come here and discover that all I ever was was the exact kind of Negro woman white folks wanted me to be. I feel like they just found a smart way to lynch me without me noticing a noose…Sometimes I just, I wanna kill white folks. And it’s not just them…I hate me, for letting them make me feel small.”

In this line of dialogue, Hippolyta comes face to face with a hard truth about the systemic racism that has sought to destroy her all her life. However, in the face of this realization, Hippolyta also realizes the unshakable power that lies within her words.

Topsy and Bospy, and all the strange creatures of the show, serve as visual representations of the unknown noose Hippolyta speaks about. Dee, along with the rest of her family, seem to be perpetually chased by the horrors and rotten form that white society wishes them to be. But the Freeman family can use the same magic that oppresses them to instead free themselves of these restraints, breaking from societal  expectations to assert their own destiny and sense of self.

With an epic score, an incredible cast, and skilled writers, “Lovecraft Country” takes the horrors of American history and uses Lovecraftian themes to retell these stories in a way that gives agency to Black Americans. This marks a distinct shift in Black representation in Hollywood. So often the Black narratives portrayed in the media are entrenched in pain and trauma. The gratuitous violence and humiliation  inflicted on these bodies are readily consumed by the white audiences as a means of keeping Black Americans in their place. Characters like Patsy from “Twelve Years A Slave” or Mammy from “Gone With The Wind” are never awarded agency or control over their own narrative, as giving them such power shatters the white fantasy of Black submission and white dominance. However, in recent years, Black storytellers have taken a stand against this damaging dynamic by crafting chilling tales of racial horror and Black resilience such as Peele’s “Get Out” and “Us.”

In Misha Green’s “Lovecraft Country,” her world is not dependent on the pain of her Black characters or their oppression, but instead focuses on their cleverness, resilience, and bravery under painful circumstances. Each character challenges the status quo simply with their existence. They “name themselves” in a way that emancipates them from the racist culture of American society. There are horrors a plenty in this land, but Green’s Black characters are not the infantilized victims of it, instead they are the heroes.

Lexi Cummings can be reached at accummings@wesleyan.edu