A Deep Dive into the Watery World of Wesleyan Water Polo 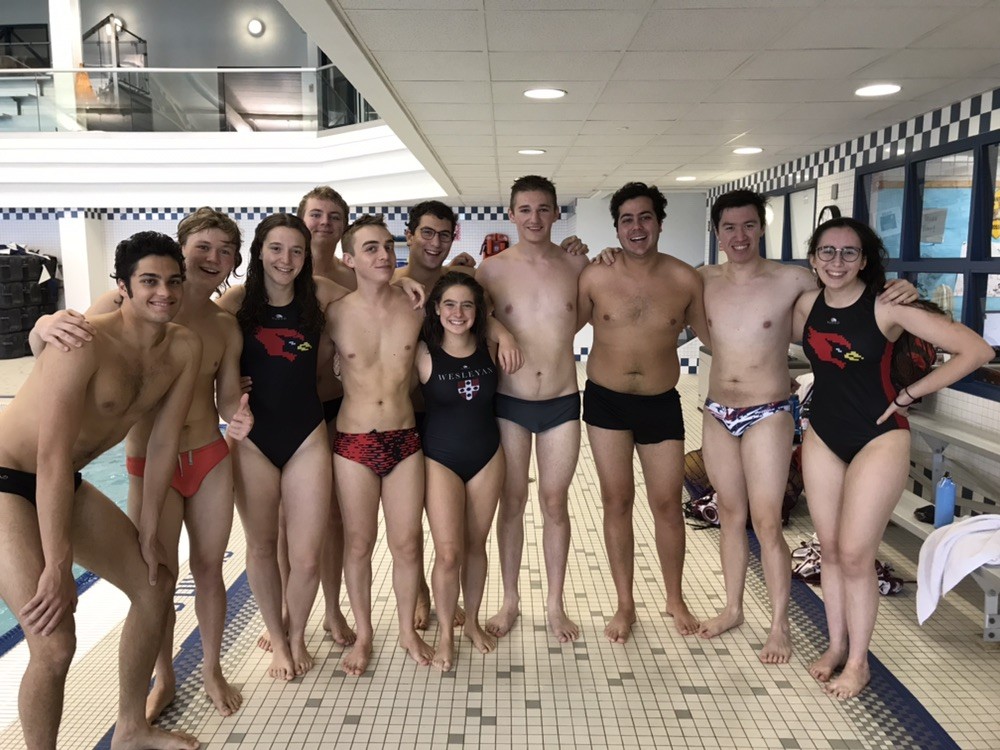 Note: This photograph was taken before the COVID-19 Pandemic
c/o Dominique Monserrat

To the untrained eye, the University has been on an unprecedented run of athletic success since the latter half of the last decade, with men’s lacrosse and women’s tennis winning Division III national championships in the spring of 2018 and 2019, respectively. Even in a COVID-shortened athletics season last year, the Cardinals still managed to find success; men’s hockey secured their first NESCAC title in program history with a victory over Trinity shortly before campus was closed down.

This all may be true, but to hold these recent accomplishments as truly groundbreaking only reveals a noticeable lack of knowledge about Wesleyan athletics. Indeed, perhaps Wesleyan’s most successful team of the 21st century has flown largely under the radar, all without receiving any funding from the Athletic Department.

That team would be Wesleyan Water Polo (also known as WesPolo), a club sport with a past far deeper than the water they practice in. Between 2000 and 2009, the Cardinals reached the final round of the Division III Collegiate Club Championships an astounding six times, winning back-to-back titles in 2004 and 2005, and finishing second in 2000, 2002, 2003, and 2006. In recognition of that success, the Collegiate Water Polo Association named Wesleyan the Team of the Decade in 2009.

While the team was all-male during the last decade, it has since become coed. An all-women’s team, sharing some of the same players as the coed team, was also founded in 2015. The coed team competes in the Colonial Division, which includes familiar rivals such as Amherst, Williams, and Middlebury, as well as the U.S. Coast Guard Academy, Worcester Polytechnic Institute, and the University of Massachusetts. The women’s team faces off against mainly Division I schools, like Boston University and Dartmouth College, with Williams being the only Division III school in their conference. As such, the women’s team only needs to finish with a better record than Williams to secure a bid to the championships, while the coed team needs to beat out several competitors in order to earn the equivalent accomplishment. However, both teams practice together, making the squad essentially unified during its time on campus.

Over its two most recent seasons, water polo has posted mixed results. It had tremendous success in 2018, finishing sixth in the country at the championships, before large graduating classes forced the team to enter a rebuilding phase. Despite this changing of the guard, however, the team’s leadership has remained undaunted. The Argus sat down with coed and women’s water polo team captain Dominique Monserrat ’21 to hear more about the current state of the team.

“My sophomore year, we had a great squad,” Monserrat said. “We hosted nationals and went to nationals, and placed sixth, which was pretty exciting. We then graduated almost the entire team, and we had no rising seniors. That meant that we weren’t going to be in the strongest place to compete, so we spent a lot of time really hoping to develop their fundamental skills and not caring so much about how the games went. So last year, we went 1–10…on a forfeit…but it still counts as a win!”

This year, COVID-19 safety protocols dramatically altered the team’s season. According to Monserrat, however, the team continued to push on with practices throughout its fall season, albeit in a somewhat different fashion.

“So typically we practice three times a week, and we usually do a warmup, some conditioning, and then we run plays, do offensive and defensive drills and general skills….this year we’re not allowed to be within six feet of each other,” Monserrat said. “So we did a lot of conditioning, mostly offensive shooting, passing, setting up offensive plays with no defense. We really just tried to make the best of what we could because water polo is very much a contact sport and it is hard to play contact sports with no contact.”

For those unfamiliar with water polo, the rules and layout of the game are fairly simple: two teams of seven players face off against each other, each seeking to score by tossing a ball through the opponent’s goal. Teams can advance the ball by passing it or swimming forward with it, but players (aside from the goalies) can only grip the ball with one hand. Reminiscent of basketball, teams also have a shot clock; a team can only hold the ball for a limited time before being forced to take a shot on goal.

Where water polo sets itself apart from other sports, however, is in its venue. Regulation pools must be at least two meters (about six and a half feet) deep, and players are forbidden to touch the floor of the pool at any moment. As such, truly high-level water polo is less a game to pick up with friends in the summer and more a grueling sport of endurance, as players ferociously tread water while getting into position, jostling for leverage, and guarding against shots by the opposing team.

Having not played the game in high school, Monserrat was thrilled to discover a brand new sport upon arriving at Wesleyan.

“I went to one water polo practice and I was like ‘this is the best game in the whole world,’” Monserrat said. “It’s very aggressive, it’s very fast paced. It’s all the good parts of swimming, like being in the water, without the boring parts where you stare at a black line forever. The energy of our particular water polo team has always been really open and friendly, and most of my very good friends from Wesleyan were on the team.”

However, Monserrat also had no reservations when it came to describing the taxing nature of water polo.

“The idea of wrestling with people in the water can be a little scary,” Monserrat said. “The idea of treading water for four quarters of a game; I understand how that could be a little intimidating…I think that’s what makes people a little wary to try it, but a lot of the people who I know who have tried it have come to love it, because the rewards are far greater than the pain.”

Besides the pure thrill of the game, Monserrat noted that the team is also a strong, tightly-knit community. The team is exceptionally close, with teammates often becoming each other’s best friends at Wesleyan. These bonds stretch across class years, and even across generations. Every year (though perhaps not this year), the team hosts an alumni reunion event that draws competitors from across the club’s long history.

“We host an alumni game every spring, where alumni ranging from 20-30 years ago to very recent alumni come back,” Monserrat said.“We play current team vs alumni and we have a little barbecue in a senior’s backyard.”

“It’s fun to see the people who have graduated, and it just goes to show how much WesPolo means to people,” she added. “I will be coming back to play in an alumni game at the earliest opportunity possible.”