In Documentary Series on Relationships, Maddie Nagler ’22 is “Finding Those People” 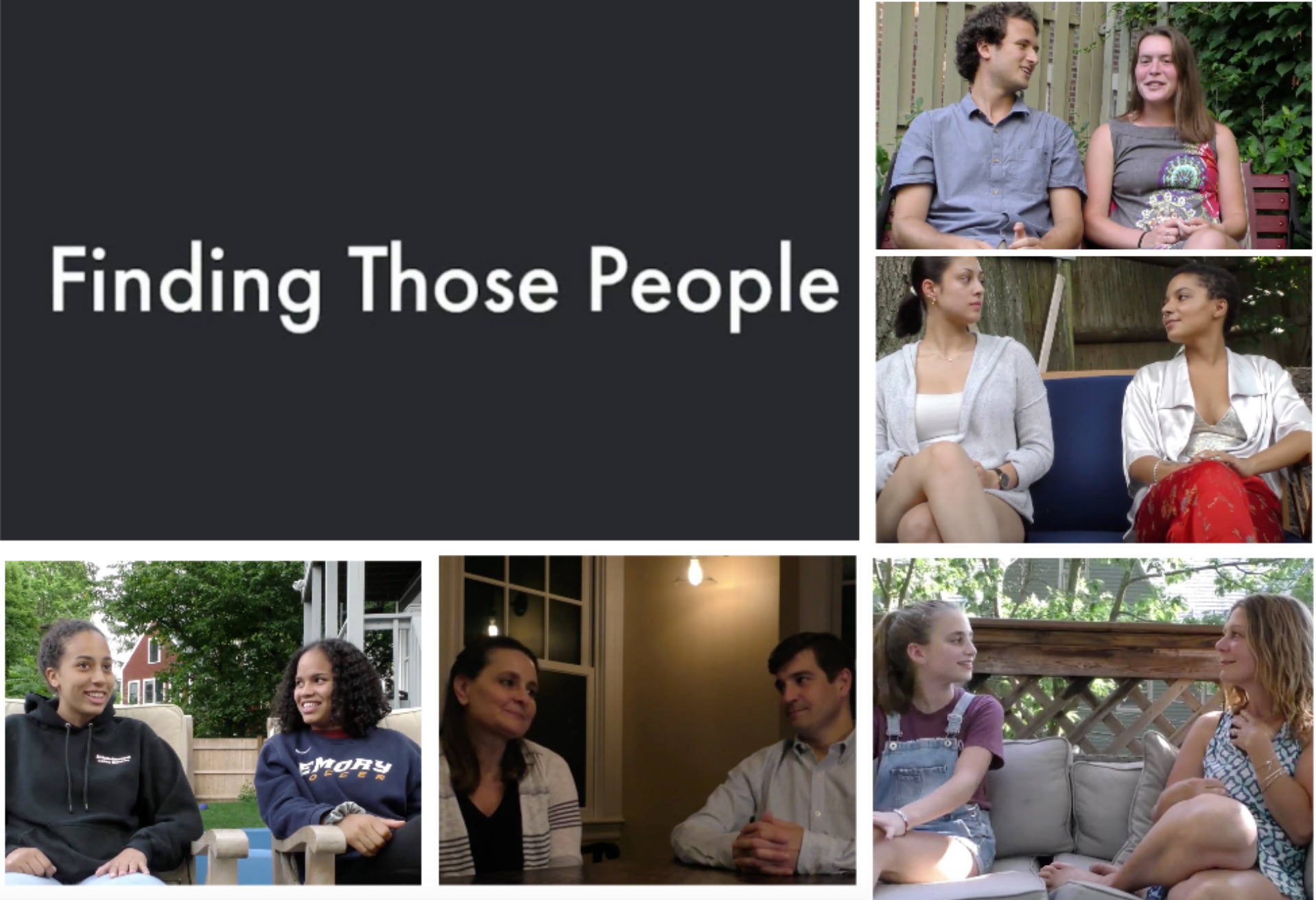 Since the beginning of the summer, Maddie Nagler ’22 has been filming and posting episodes of “Finding Those People,” a series about pairs of people who have an impact on each other’s lives, on YouTube and on the series’ website. Spanning mothers and daughters, romantic partners, friends, co-workers, siblings, and more, the series interviews pairs of people to examine how we shape and are shaped by our close relationships, as well as how these relationships navigate difficult and joyous periods. While it’s Nagler’s job to “find” people who will talk openly about their relationships, the series centers around how those people have found each other.

“We debated a bunch of names, but with ‘Finding Those People’…the point is those people who you think shaped you into who you are, and it’s a conversation about that process and what that looks like,” Nagler said.

In various episodes of “Finding Those People,” the pairs of interview subjects take turns saying what they appreciate about each other. A daughter, in one of the first episodes, tells her mother that she wants to be like her when she grows up: welcoming, passionate and resilient, with a “fiery personality.”

Sitting on patio furniture, an organizer of a town’s Black Lives Matter protest tells her co-organizer how much she has seen her grow in the time they have known each other.

“You are such a strong person,” she says. “You’ve just been through so much, and you have such a willingness and a strong capability of self-reflection. And that’s something that I’ve learned, to step back and check myself, because that is something that I see you do in other relationships, with the people, with the movement.”

Arms clasped on the dining room table in front of him, a husband in another interview tells his wife that her ability to be goofy and fun, to not lead her life according to what other people think, has rubbed off on him, encouraging him to dance in public without being self-conscious.

For Nagler, witnessing these moments of appreciation and preserving them for others to see has been one of the most rewarding parts of the project.

“There’s people in our lives who we think are so important to us, and we just forget to say, ‘Here are all the amazing things I admire about you,’ because when would you say that?” Nagler said. “So giving this space for people to say, ‘This is what you’ve taught me and thank you for teaching me this lesson,’ when the other person didn’t even realize they had this impact, watching how someone responds to the ways they’ve impacted someone else is really powerful.”

The videos, which are neatly produced with subtitles, aren’t so much talking-head segments as they are casual snapshots of how people who are close to one another relate. Nagler often positions her subjects outside, sitting on patio furniture or on the ground, with their fingers in the grass. Responding to Nagler’s questions, the subjects frequently finish each other’s sentences or make gentle amendments to their partner’s answers. With the goal of capturing relationships in their unpolished, complicated forms, Nagler prefers to see her videos more as “prompted conversations” than as traditional interviews.

“I want the two people to face each other and address each other, and if they need help furthering the conversation, that’s when I prompt them with my questions,” she said.

The project began when Nagler came home early from the University due to COVID-19. In her new abundance of free time, she began scrolling through Humans of New York, a popular Facebook page run by photographer Brandon Stanton, which features portraits and interviews from around the world.

“I really love the idea of using photography, film, and art to create understanding, and that’s exactly what he does in Humans of New York,” Nagler said. “In every Humans of New York feature, [the subjects] usually reference another person and some impact that that person has had on their life or how that person has changed their perception of something, so when I was reading all of these people referencing others, I was like, ‘Oh my gosh, I just want to listen to a conversation between these two people and the stories they have and the ways they’ve impacted one another.’”

With this inspiration, “Finding Those People” was born. Starting over the summer, Nagler began identifying pairs of people she could interview and started collecting footage of the conversations. She started by contacting people she knew, people who knew her background and could help her build a base of content. More recently, she has been finding subjects for a new subsection of the series, titled Wesleyan University Stories, with the help of referrals and submissions to her website.

“It’s a very vulnerable place to put yourself in,” Nagler said. “I don’t want [the subjects] to just say, ‘Oh yeah, we have the best relationship,’ I want people to be truthful about the hardships they go through. I started with people I knew, because I knew they would trust me to portray them in an accurate light.”

Nagler, who is a psychology and film double major, is now working on the series as part on an Engaged Project, an academic option which the Patricelli Center for Social Entrepreneurship, the Allbritton Center for the Study of Public Life and the Fries Center for Global Studies created in response to the educational disruption of COVID-19. Students who enroll in the program receive a full credit for conducting an independent study or project, crafting their own syllabus and meeting with a cohort of peers to discuss their progress and challenges. When Nagler reached out to Film Professor Sadia Shepard, with whom she had taken “Documentary Filmmaking: An Introduction to Project Learning,” about the project, Shepard suggested that Nagler continue her work with a series of on-campus interviews through the new academic initiative.

“It’s pretty awesome,” Nagler said. “I’ve been doing a lot of reading on the psychology of storytelling, like what makes a story powerful and what makes people actually want to listen and how you can be engaging but truthful.”

As part of the engaged project, Nagler has been working under the advisement of Monique Hamze, an author who is currently writing a book about relationships, as well as Professor Shepard, whom Nagler says has been extremely influential on the project. Over the summer, Nagler also worked with friend Sascha Wolf-Sorokin, who is now a junior at Claremont McKenna College, on building the project’s website, establishing its social media presence and organizing its logistics.

Although the finished videos clock in at under 10 minutes, Nagler often films her subjects talking for an hour or an hour and a half, editing the footage down to capture an interesting theme or a series of particularly insightful moments. Faced with the challenge of viewers’ short attention spans, Nagler is careful to give a whittled down snapshot of the conversations.

“Youtube actually gives us statistics, and people [tend to] watch about 3 minutes, which is actually pretty good. It’s just really hard to summarize a relationship in 3 minutes, but I’m trying to make it more concise,” Nagler said.

“There’s something therapeutic in seeing that people have gone through similar things to what you’re dealing with, or that other people are having similar conversations perhaps, but every story is unique, and there’s something really special about that as well,” Nagler said.

In giving space for the subjects to share their appreciation for one another and reflect on their relationship, the interviews not only give viewers the feeling of being welcomed into an intimate conversation, but also may inspire them to vocalize their admiration for others in their own lives.

“It would be a bit weird if I called my friend right now and I was like, ‘Oh my gosh, these are my favorite things about you,’ because that’s not something we do in day-to-day life, but we should!” Nagler said. “People tend to think they’ve had less of an impact than they’ve actually had, and it’s so important to vocalize that impact. If someone’s done something really special for you that you think about a lot, tell them. I don’t know what that context is and how to make it not a little bit weird, but even if it is weird, do it.”

Going forward, Nagler hopes to continue the project, even when she is no longer doing so for credit. As she continues with her series on University students and faculty, she plans to work on videos around the topic of reunion, as the pandemic has changed, for many, the dimensions and distances of their core relationships.

“I’m just enjoying it a lot, and I’m learning a lot,” Nagler said. “It feels really good to have a passion project right now.”

Sara McCrea can be reached by email at smccrea@wesleyan.edu or on Twitter @sara_mccrea.