Book Review: In Gloria Chao’s “Rent a Boyfriend,” The Boyfriend Isn’t the Point 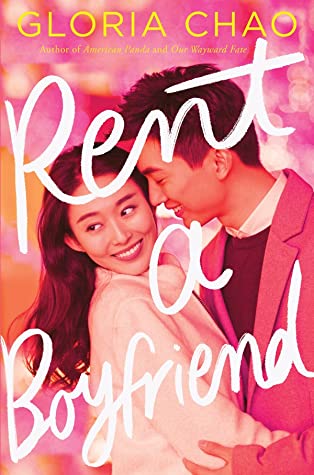 Gloria Chao’s new novel “Rent A Boyfriend” is set to release on Tuesday, Nov. 10.  While the book’s fake dating premise and college-aged characters drew me in immediately, it wasn’t exactly the fluffy YA romance novel that I expected.

The story features Chloe Wang, an economics student at University of Chicago who decides to hire a man from the company “Rent For Your Rents” to be her boyfriend when she returns home for Thanksgiving. Chao prefaces the book with a note about the popularity of such services among Asian-American women whose parents are putting pressure on them to find a husband. In Chloe’s case, her Taiwanese parents already have a man lined up: Hongbo, the son of one of the wealthiest families in their community, who also happens to be a misogynist snob. Suffice to say, Chloe is not interested. In the hopes of winning her parent’s support and getting Hongbo out of the picture, she hires Andrew (whose real name is Drew), and the two pretend to be a couple. As they grow closer and Chloe is forced to hire his services again for Christmas, they end up falling in love and have to find a way to break the news to her parents that Drew is not actually his disguise of a wealthy UChicago student on the pre-med track.

This was the plot on the back of the book, but Chloe and Drew admit their feelings to each other only a third of the way through the story. What follows mainly focuses on Chloe’s family dynamics and her struggle in choosing between her parents and Drew. This element was interesting in the first half of the book because it provided a look at the generational differences within Asian-American families. Chloe doesn’t feel a very strong connection to her Taiwanese roots, which is a point of tension throughout the book, as she attempts to find a balance between pleasing her parents and challenging their ideals when they conflict with the future she wants for herself. Ultimately, her family wishes for her to marry someone rich as a means of guaranteeing financial security. Drew does not live up to this image, since he aspires to be an artist, which traditionally isn’t the most lucrative field. Chao’s depiction of Chloe’s parents was quite multidimensional, and at times I found myself more interested in them than in Chloe’s story with Drew. Their love story is really secondary to Chloe’s conflicts with her parents and the Asian American community she lives in, making for a much more emotionally complex plot than I anticipated.

The second half of the book, however, does little to expand upon these dynamics, rehashing many earlier conversations to the point that reading becomes tiresome. I frequently found myself wondering what else could possibly happen in the next 100 pages. This seems to be due, in part, to the relationship between Chloe and Drew, which essentially stalls after they decide to become a couple. With the exception of a date or two that shows them getting to know each other outside of the show they were putting on for her parents, their storyline revolves entirely around Chloe’s familial conflict, making Drew more of a side character.

Although the book alternates between Chloe and Drew’s perspectives, it definitely favors Chloe’s. Her character undergoes pretty significant development throughout the book, and it becomes easy to forget that she is only 19. Despite how unique her situation is, Chloe still comes across as a relatable character, which is most apparent in her interactions with her mother. This was definitely one of the high points of the book, because while there is quite a bit of tension between them, moments of levity show that each has good intentions and that they do care for each other a great deal. This makes the growth of their relationship throughout the book even more rewarding, since there seems to be hope for continued progress between them after the story ends.

Drew’s character, on the other hand, feels flat. Even though Chao frequently allows the reader into his thoughts throughout the book, it’s hard to describe him as more than a good guy who wants to be an artist. Chao addresses a few of his internal conflicts, such as his insecurity about being a college drop out, but they are only mentioned briefly. By the second half of the book, he serves almost exclusively as an emotional support for Chloe. Even in his epilogue, he shows little change in both his position and personality since the beginning of the book. Aside from his decision to start getting in touch with local artists on social media, he doesn’t move any closer towards his goal—he just has a real girlfriend. This was an interesting choice by Chao, considering that the male interest is usually given more attention and credibility in YA romance novels. Putting emphasis on Chloe’s perspective and character ensures that her thoughts and feelings are central to the plot, while also illustrating that Drew—or any guy, for that matter—is not her sole focus, making for an anomaly in the genre.

That said, this book was an entertaining read and offers an interesting look at Taiwanese American culture, which I previously knew little about. Chao even provides a glossary and pronunciation guide for Mandarin words used in the book, as well as explanations of concepts like “Little Emperor Syndrome” that are referenced by the characters. Reading for this aspect of the book alone, as well as Chloe’s struggles with her parents and identity, it would likely be an enjoyable read. If you’re searching for a light romance, however, I’d recommend reading just the first half of the book or looking elsewhere.

Gloria Martinez can be reached at gmartinez@wesleyan.edu.