WesCeleb: Gavin Willis ’21 Wants to Connect With You on LinkedIn 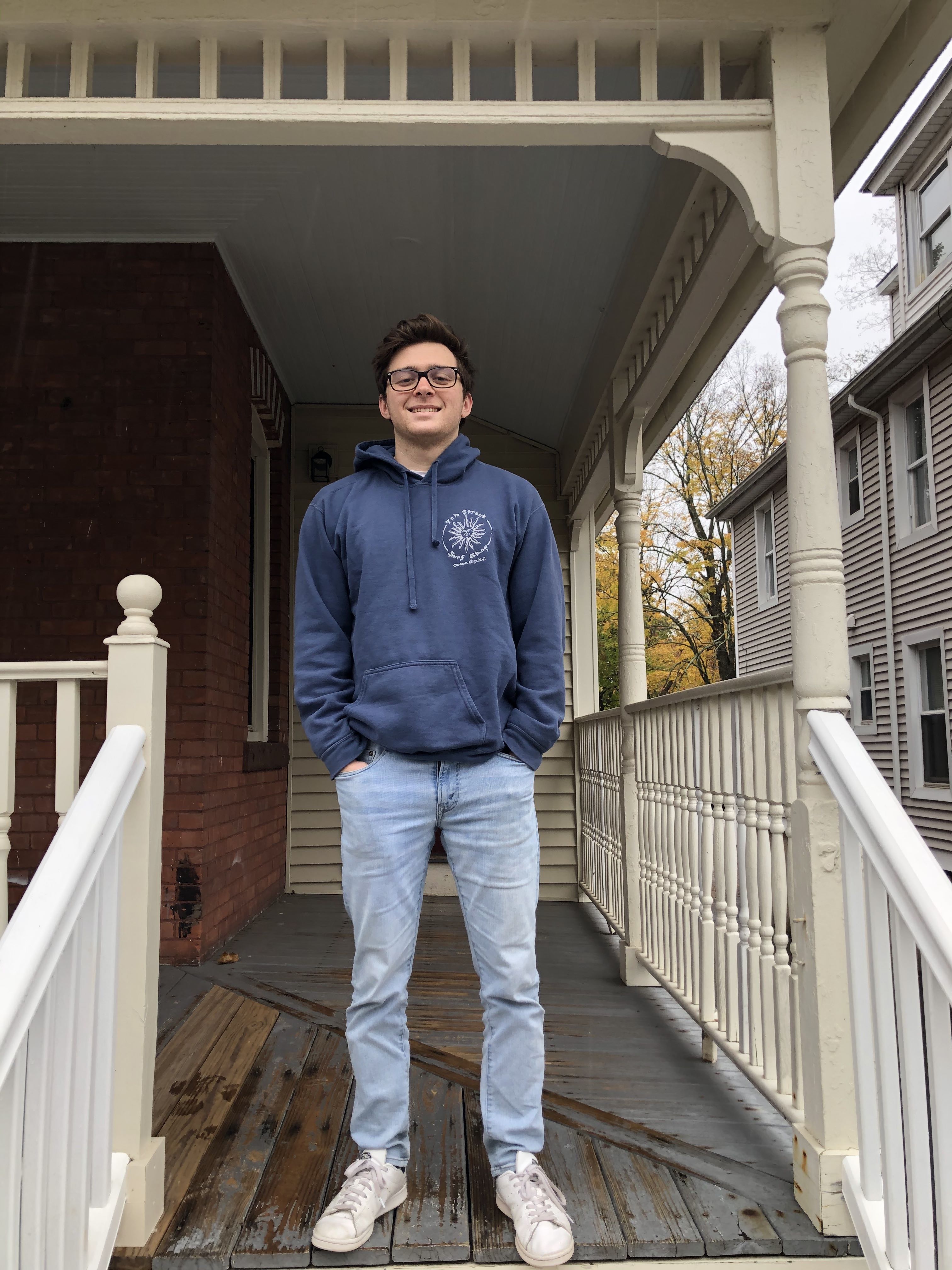 Gavin Willis ’21 claims to be afraid of posting on social media, yet his latest TikTok has 2.5 million views and over 370,000 likes. Willis’ clout doesn’t stop there. He also bragged to The Argus about how he went from zero to six hundred LinkedIn connections in a month. This social media star is a government and economics double major and applied data analysis minor who can be found playing Frisbee, recording the Arcadia Political Review’s podcast, or losing a game of chess. Despite his many accolades, Willis was initially apprehensive about sitting down with The Argus due to an underlying fear that this interview is a prank. We can assure you this is not a prank and that Willis thoroughly deserves his WesCeleb nomination.

The Argus: First of all, Gavin, can you tell us why you think you were nominated to be a WesCeleb?

Gavin Willis: Because my friends are trying to prank me.

A: Can you talk about what you do on campus?

GW: See, I knew these questions were going to be asked but I didn’t prepare. I just came right in. I play ultimate Frisbee on the co-ed team. I’m the party captain on that. Not this semester as much, but I did go to Wesleyan ACLU. I’m in TEDx Wesleyan; go to the event next semester! What else do I do? I go to class!

A: You’re a government and economics major and data analysis minor, how do you like gov and econ?

A: What are some of your favorite classes and professors?

GW: Professor Erika Franklin Fowler. She’s a complete badass. I would die for her. On the record. Basically, for all my gov classes, I took media classes, like Media and Politics, Polarized Communications. And then I took research-based classes in gov as well as Applied Data Analysis, Empirical Methods in Political Science. I feel like classes where you can have a discussion and learn about real-world topics and current events are what I focused on.

A: How long have you been on the Frisbee team?

A: So you’ve always been an athlete?

A: Is Frisbee a nice community?

GW: Oh, yeah, it’s open and inclusive. For the co-ed team, it’s not really about high-level play, it’s just about having fun, which is awesome.

A: Can you tell us about TEDx and what it’s been like to be an organizer of the event?

GW: TEDx is fun. We put on a conference in the spring. I feel like it’s fun to be a part of something that has a product that they put out at the end.

A: What are your plans for it for this year?

A: Is it true that you’re in the chess club?

GW: I only went a couple of times, but my housemates and I actually play chess a lot.

GW: We basically just show up and I get whooped in chess. But I’m one of those blindly optimistic people. I’m like, maybe this time, then I get beaten in three moves.

A: Did you play chess before Wesleyan?

GW: For fun occasionally, but now my house is really competitive. They all like chess and so I still get beat but my trick is you play a below-average person and then never play again. I haven’t played since the second week of school. But they’re like, “I think Gavin’s the third best, the second-best potentially.” And I’m like, “Yep, exactly.”

A: Can you tell us about your TikTok? How did you get started making them?

GW: During finals, I tried to procrastinate and I made TikToks and then two of them got like a thousand views and I was just like, “Oh, that’s pretty cool.” And then I got home and I was just like, I’m going to keep making these because I didn’t have anything else to do.

A: How does it feel to be viral?

GW: One time? It’s kind of cool for the first four days and then once my mom posted it on Facebook, it just loses all value. She’s like, “Look what Gavin did.” I feel like when other people say that it’s popular I just deny it.

A: Do you want to talk about doing contract tracing back home in Florida over the summer?

GW: So basically, I wanted to work for the National Football League (NFL) and so I was pursuing an internship there and I was pretty far along in the process and then they canceled the entire program in mid-March. And so I was home in my high school bedroom, just doing nothing, my whole family there. I felt like I was 15 and I was like, “I don’t know what else to do, how can I help my community?” I wanted to help, I don’t know. I also thought they’d definitely be hiring, and I also had a summer grant and I wanted to use the summer grant.

A: So what did you actually do? What is contact tracing?

GW: I’m from Key West, Florida so it’s pretty small and Key West is a one road in, one road out kind of place. So it was closed off for a while and so I was helping put together a manual for reaching people who didn’t have phones in Key West and reaching people who weren’t responding and then I helped redo the website with information. Then halfway through, I singlehandedly managed a text messaging service that texted people daily if they had any symptoms. And so if someone responded “yes” then I would send their information to the nurses that we were working with. I also had to remove and enter people into the system…

A: To track them?

GW: So I didn’t have every COVID case, I had every contact of a COVID case. So we’d have to monitor them for 14 days and so I would have to manually put their number in and manually put all the information in and then they would automatically get a text every single morning when I hit the button to text everybody.

A: You mentioned the Arcadia Magazine, can you tell us a little more about that?

GW: It’s run by my friend Josh [Ledford ’21] who’s going to rule the world one day, I swear, so I might as well get on his good side. I started doing social media and then I realized I’m afraid to post on social media, which is also ironic because I post TikToks. But we decided to start doing a podcast because we found that fun and then we did one episode and then COVID happened so we’re actually starting it up this week again. We talk about current issues and actually the only podcast we have was during the Democratic primary and then everyone dropped out the next day, the day after we recorded the podcast, and so it’s like “Oh I wonder who it’s going to be, this is the most amazing Democratic primary ever, we have so many diverse candidates” and then everyone dropped out. So go check out the Arcadia Podcast on Spotify or on my LinkedIn, feel free to add me.

I love LinkedIn! I’m doing a project on LinkedIn today, I have to do it for my Media Economics class and we do presentations on current media platforms and so we’re talking about LinkedIn as a platform. Yeah, I went from zero to six hundred connections in a month, isn’t that crazy?

A: What are some of your favorite memories at Wesleyan?

GW: It’s been a lot of ups and downs, that’s a hard question. One time we went on a frisbee trip to a different school and hung out there and partied with them and hung out with them. It was Fall Break, and we were just like “Okay we don’t really have class on Monday and no one really has a test or anything big on Tuesday” so we just drove back and we were like, “Let’s stop wherever we want to” and so we stopped like six times and just pulled over for whatever we saw and that was really fun. And then we climbed a mountain, that was fun. That was probably one of the best experiences.

A: Where did you go?

GW: I don’t know! Whenever we go on these trips I just kind of hop in someone’s car at 6 am and I just close my eyes and wake up at another school.

A: Is there anything you have on your senior year bucket list that you haven’t done yet?

GW: That’s a good question, I don’t know. I’ve never been to Star and Crescent, maybe I’ll go there sometime.

A: What will you miss about Wesleyan?

GW: Oh, I’m going to miss Sue! The day Sue knew my name, that’s when it all went uphill. What a sweetheart. She asks about my family and stuff, she’s so nice. Every Christmas she makes me cookies and gives them to me. We’re tight.

A: Is there anything else you want to add about your time at Wesleyan?

GW: Get LinkedIn early, add me on LinkedIn. I loved LinkedIn, I’m a big fan. Also, Chai Chargers are solid.

One of my true highlights of Wesleyan is my personal growth and educational growth. I learned a lot about myself and my work ethic. My writing has improved drastically. I struggled during Wesleyan and I really came out stronger and more motivated to make a change. I am a very different person than I was freshman year. I grew a lot.