“Sporror”: An Abomination of a Movie Genre that Should Not Exist

You fans of horror movies terrify me. I’ll never understand how you’re able to sit down in front of your TV and willingly watch over an hour of footage that is designed to make you feel unsafe in your own home. Why do you like it when things jump at you? Is it like the adrenaline from a roller coaster? Before I wrote this article, I thought that horror was probably the worst film genre to ever exist. Probably the only one that I would never watch under any circumstances.

However, I wasn’t prepared for the atrocity that is “sporror” or sports horror. These two things should not exist in the same sentence. But no, it’s apparently a very small subset of cinematic horror. A very small, very terrible, very not worth it type of horror. Join me on my journey to learn just how horrible two of these sporror movies can get.

The reviews for this movie were not very encouraging, so I pressed play with a heavy heart. It follows the story of a couple that are both professional bikers. It’s really hard to make biking exciting. To all four of the biking fans, I’m upsetting right now, my sincerest apologies. Luckily, the film tries its best to make the audience feel as exhilarated as the athletes by including lots of shaky, first-person Go-Pro footage. Okay, scratch the “best” part. The film tries.

I know I’m not the only one who gets a weird feeling when no one is wearing a mask in a TV show or film. “Downhill” is also apparently about a creepy alien disease (the cult sequence at the beginning made this a little hard to tell), so that feeling only increases when people are coughing blood all over the place. Wear a mask!

This movie doesn’t make sense at all. I thought the scary part was the people hunting down the main characters in the middle of the wilderness. Then they convinced me it was the disease, which was kind of implied to also be aliens. Now it’s cult-inspired horror? Or maybe zombies? Zombie-alien-cult? I have no idea.

Rating: 6/10 on the sportiness. They don’t do nearly enough biking for it to be considered a sports film. They spend most of their time being nervous and running around. The people jogging at the end remind me that this was intended to be somewhat of a sports movie. 2/10 for the horror. I’m a scaredy-cat and I only flinched at unexpected gunshots. Please don’t watch this movie. 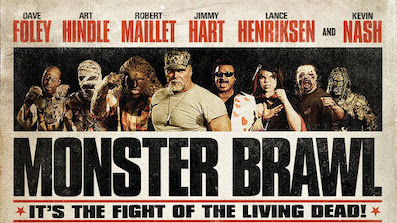 I decided that I would have to watch another sporror movie in order to get a better feel of the genre. It literally can’t be worse than the movie I just watched. The bar is on the floor.

“Monster Brawl” actually seemed like it would be fun. It’s cross-listed as a comedy, which will hopefully make me enjoy it a little more. In this movie, various monsters are brought to a haunted cemetery to compete in wrestling matches to the death. Sports seem to be more central to the plot of this film.

This movie looks stupid, but the kind of stupid that knows it’s stupid and is running with it. It feels like they only had one take for all of their lines and the actors learned said lines approximately twenty minutes before they started filming.

The rules of these matches feel somewhat bizarre. A kick to the groin is considered an unclean move, but competitors are allowed to use sledgehammers, ancient magic amulets, and other weapons? It feels like they’re not really relying on athletic ability anymore if they need to grab a wooden stake. The movie solves this problem by having a monster kill the referee. I guess if no one’s around to enforce the already limited rules, said rules can’t be broken anymore.

Initially, I didn’t think this movie actually employed any real wrestling techniques, but as time went on, more and more techniques from boxing, martial arts, and other related sports were demonstrated. It was actually living up to the Sporror idea, which is very impressive. It’s still a terrible movie, but at least it’s sporty.

Rating: 8/10 for the sportiness. While there are definitely some moves that are absolutely illegal, all of the characters use at least one real move accepted by some form of martial arts or wrestling. It seems like the creators remembered what genre this fell under while creating it. 1/10 for the horror. This is really more of a comedy. The most horrific thing that happens is someone gets their face melted off, but the special effects aren’t exactly high-class. It looks a bit more like the monster had a disaster with a strawberry face mask.

I have found a new least favorite movie genre. In horror movies, you somehow managed to get worse by attempting to throw sports in the mix. It’s a worse combination than peanut butter and ketchup. I think I’ll stick to rom-coms, thanks.