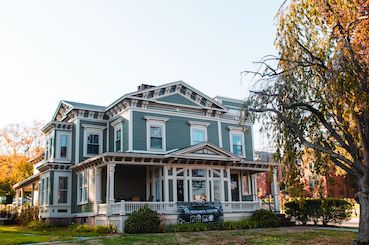 With the onset of COVID-19 last semester, University students transitioned to a virtual form of religious and spiritual life. However, as students reacclimate to campus life this academic year, in-person religious gatherings and services have slowly begun alongside virtual events.

The three available chaplains on campus—Jewish Chaplain and Office of Religious and Spiritual Life (ORSL) Director Rabbi David Leipziger Teva, Catholic Chaplain Father Bill Wallace, and part-time Protestant Chaplain Intern Jami Carlacio—are working with student faith groups to create a welcoming environment for both in-person and remote students during the COVID-19 pandemic. There is currently no Muslim Imam on campus.

This fall, various faith groups are holding regular in-person, socially distanced services. Shabbat and Catholic mass services take place weekly, as does the Wednesday Bible Study hosted by Wesleyan Christian Fellowship (WesCF) with a virtual alternative held over Zoom. Additionally, members of the Wesleyan Jewish Community (WJC) have instituted a big/little program where upperclassmen are matched with a first year or transfer student to help students build connections based on shared academic or extracurricular interests.

The WJC also conducted a few in-person events for Rosh Hashanah and Yom Kippur, including a socially distanced potluck where around 40 participants were split into groups of four or five individuals. However, services for these holidays were done via Zoom in order to accommodate for the large numbers of participating students. The Zoom services were designed by the WJC Board to be as celebratory and engaging as possible.

“The [B]oard claimed the High Holidays this year in ways they haven’t in the past,” WJC Co-Chair of the WJC Sarah Backer ’22 wrote in an email to The Argus. “Since all students were going to be on campus, we put a concerted effort into making the programming as welcoming and close-to-home as possible. For instance, students created programming for the Zoom services; first-years and upperclassmen came together in small ‘pods’ and offered intellectual and artistic creations that they had molded together.”

Participating students said that the WJC’s programming work was memorable.

“There was the one that I participated in where there was a walk to Indian Hill,” Talia Rodriguez ’24 said. “I think it was interesting this year especially because a lot of people usually go home for the High Holidays. There were actually a lot more people here than usual, so that’s an interesting thing that made it different, I think.”

Rodriguez also emphasized how religious life has been a supportive network during the time of COVID-19.

“I would definitely say my expectations have been exceeded,” said Rodriguez. “I feel so lucky to be Jewish right now and to have this community…. I feel like the Jewish community is so active right now and ready to do things in a warm and comforting way.”

Along with these in-person events, online alternatives are also being offered to accommodate students studying remotely or those who are wary of in-person events during the pandemic.

The Muslim Student Association (MSA) is looking to schedule meals where in-person or remote students can meet with one another virtually. Students who want to participate will be reimbursed for their food using money from the MSA’s social budget.

WesCF Co-Leader Angela Loyola ’21 explained that their group is focussing on holding online events, such as Bible Study for international students and Protestant Prayer Nights, instead of in-person ones.

“We definitely are very cognizant of social distancing guidelines, and we would never do anything that had a huge [amount of] people,” said Loyola. “We’re mostly leaning towards online events this semester, just to make sure that we accommodate students that aren’t on campus.”

While there have been many successes, some challenges have arisen for student faith groups. For the MSA, it is difficult for members to participate in religious events and prayers because there is no Imam on campus this semester. Normally, the campus Imam would lead the Friday prayers (Jum’ah), but because there is no Imam, the MSA is encouraging members of their group to do so for the time being. The MSA is also reaching out to the wider Middletown community to find an outside Imam or someone who could lead Jum’ah.

“It is definitely a challenge,” said MSA Board Member Annie Khan ’22. “I think, because we’re dealing with the administrative stuff or trying to figure out what’s happening with Jum’ah and things like that, the community aspect of it is being put to the back.”

The MSA is also struggling to find ways to successfully navigate a semester where they are hosting both in-person and online events, in addition to adjusting to the absence of an Imam.

“I guess no one knows how to do this properly,” said MSA President Mo’ath Almahasneh ’21. “So it’s more of a trial and error right now. It’s like, should we do a Zoom meeting? You also get Zoom-strained, but how else are you going to meet? You want to do a movie night? Also, how can we do that? It’s just the tiny steps, the whole virtual thing. Even if we wanted to do it in-person, which we can, we just have to be under the [regulations].”

In addition to the programs administered by faith groups this semester, there has been a larger program in the works: the establishment of the Religious and Spiritual Leadership and Activism (RASLA) council. The council will bring together members of the Catholic, Muslim, Jewish, and Protestant faiths, ORSL mindfulness intern Tyla Taylor ’21, and less institutionally-recognized religious communities, such as Buddhists on campus. The goal of the RASLA council is to create a spiritual space designed to unite students with various religious and spiritual identities to provide support for their communities in times of need.

“The RASLA Council is…creating solace space[s] in the midst of hardship, intersectional programming, and connecting to religious and spiritual organizations beyond Wesleyan’s campus,” wrote Religious and Spiritual Diversity intern at the ORSL Emily McEvoy ’22 in an email to The Argus. “It will be a space for faith-based social justice work and what we typically define as ‘activism’ in the context of the university setting.”

Whether it be online or in-person, Leipziger Teva noted that there has been an increase in the number of students participating in religious events this semester.

“Perhaps it’s because…of our programs [that] are happening in-person like Shabbat services, or mindfulness meditation at [the] HOGWARTS tent,” wrote Leipziger Teva in an email to The Argus. “Maybe it’s because students are finding that this is a meaningful way to meet new people.”

Some chaplains have found that building community this semester could be done through expanding pre-existing programs. For Wallace, this includes increasing digital outreach to the Catholic student community.

“During the last six months, I doubled the newsletter that I send out on a weekly basis,” said Wallace. “The newsletter would go out to all the members of the Catholic community and others and would contain items or articles or links…about what was going on on campus as well as items that might serve to inspire people in their faith.

Carlacio, who has taken a similar position as former Protestant Chaplain Reverend Tracy Mehr-Muska who stepped down last academic year, is also working on fun and interactive ways to get to know University students and the Protestant community at large.

“I’ve been trying to get to know students individually, and one of the ways that I’ve been doing that is I have registered my dog as an emotional support animal…and I walk [him] when I’m here or around Usdan, and students come up and pet him, and then I introduce myself to them and let them know I’m here if they want to come see me or set up a time to meet online,” said Carlacio. “I also did host an apple picking trip this past weekend to Lyman Orchards…and I’m going to try to find other ways to engage students safely so that they can meet more people, and so that I can meet them and interact with them.”

Through reaching out to members of their respective faith groups and the University community, Teva believes that the chaplains are a great resource for students wanting to seek out counseling advice and feel welcome while participating with religious life.

“I have had many conversations with students both via Zoom and in socially distanced ways these past weeks,” wrote Leipziger Teva. “I hope that Wesleyan students will remember that chaplains are a unique and confidential listening presence and that they will seek us out.”

Carlacio has reached out to and gotten to know students, making herself available through in-person events and Zoom meetings.

“[Carlacio] has one on one meetings available for anyone just to talk about life,” said WesCF Co-Leader Charissa Lee ’23. “It kind of acts like counseling sessions, and I’ve been attending them weekly, and it’s been really good. She is really open and very supportive. She’s also been providing a lot of structural support to WesCF as well, giving lots of good ideas on different kinds of programs that we can run throughout the semester.”

Although it is her first semester at the University, Carlacio believes that she, in addition to other available chaplains, can be a key resource for developing a welcoming environment for any student who wants to contact her. Carlacio believes that chaplains have a profound influence on the ways in which students can participate with religious life this semester, both religiously and emotionally.

“The chaplain’s office isn’t necessarily [a place] just to go talk about prayers or whatever; it’s a place to just go and just be,” said Carlacio. “Part of the chaplain’s job is to just be with people and kind of a ministry of presence, and so my job here is to be there for students, however that looks. So it may be offering emotional support, spiritual support, moral support.”

Oliver Cope can be reached at Ocope@wesleyan.edu